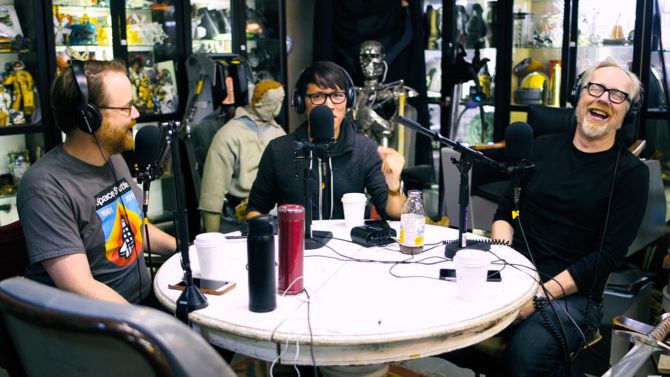 We’ve all come across a situation where we’ve had a filter on a lens that just wouldn’t come off. If you haven’t, you will one day. Switching environments, or just leaving your filter on there for too long can cause it to pretty much become embedded into the front lens element. At other times, cheap filters, or the wearing down of coatings on the metal lens ring or filter itself can lead to galvanic corrosion.

In a recent podcast at Tested, former Mythbuster Adam Savage recounts the story of how he removed a shattered filter. How did it become shattered? Well, Norm’s Canon 24-70mm f/2.8II lens fell to the ground along with his shiny new Canon 5D Mark IV after his hand got knocked walking into The Cave. After much panic to determine whether it was just the filter or the lens elements had cracked, the plan began to get it off. A task which turned out to be easier said than done.

The relevant bit starts 11:20 into the video (if the embed above doesn’t automatically start playing there). It’s an amusing story, with a typical Mythbuster brute-force ending. They allude to a timelapse of the fall and subsequent filter removal in the video, shot by Joey Famelli, but it doesn’t appear to be online anywhere yet. At least, we couldn’t find it. If you’ve seen it, let us know in the comments.

I’ve experienced similar myself. I had a circular polariser stuck on a Nikon 300mm f/4 AF-S. I’d put it on in nice warm Florida, and attempted to take it back off in freezing cold England. It sat there for about a year before I finally got fed up enough to take a hacksaw and a pair of vice grips to it. It destroyed the filter, obviously, but the lens was just fine.

There are, of course, tools out there to help you remove stubborn lens filters, like this one from Neewer. I’ve also used grippy drawer liners and router pads to remove stubborn filters before, too. Sometimes, though, they just really can’t stand up to the job and you need to take an unconventional approach. Now, you have another possible method you can use. A similar method was posted to YouTube last year.

Stuck filters aren’t just the potential consequence of dropped cameras, but it is a cause you can avoid. Remember to wrap that strap around your wrist while carrying it, and maybe you won’t find yourself in this position in the first place.

What methods have you used to successfully remove stuck-on filters? What methods and tools absolutely didn’t work? Let us know in the comments.

If you have a lens with a stuck on filter, try attacking it with a band saw