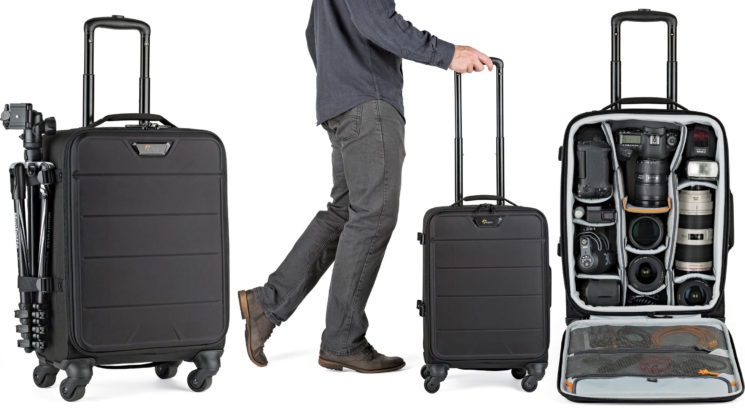 Roller cases aren’t something I use very often. They’re just not practical for most of the locations at which I shoot (rocky, rough ground around rivers, lakes, etc). But sometimes they’re absolutely the best tool for the job. Last week, for example, DIYP covered The Photography Show. And on an exhibition hall floor, a roller case is perfect for carting gear around.

Lowepro has made roller cases before, but until now they’ve all been two wheeled cases. They’ve upped the wheel count to 4, though, with the new Lowepro PhotoStream SP 200. Lowepro had a couple on display at their stand during the show, so I got to see one in person, and boy is it a nice roller case.

As one would expect from a modern roller case, it’s designed for travel and easy access. So, it satisfies the carry-on requirements of most airlines and the four wheels make moving the thing so much easier than two. The wheels aren’t fixed, either. As well as simply rolling along the floor, they rotate around the vertical axis, too, allowing you to push it in any direction you wish.

From the outside, the SP 200 looks extremely clean. On the back, there’s an ID holder and document wallet. And then there are the wheels on the bottom and pullout handle up top. Other than that there’s nothing (except the handles, which we’ll get to later). Everything else is accessed by opening up the front cover using just the one zipper. Inside that front cover is a slot that holds up to a 15″ laptop. And you can also just open up the front a little bit, bend it over and pull out your laptop without completely opening up the contents. Very handy when going through airport security. 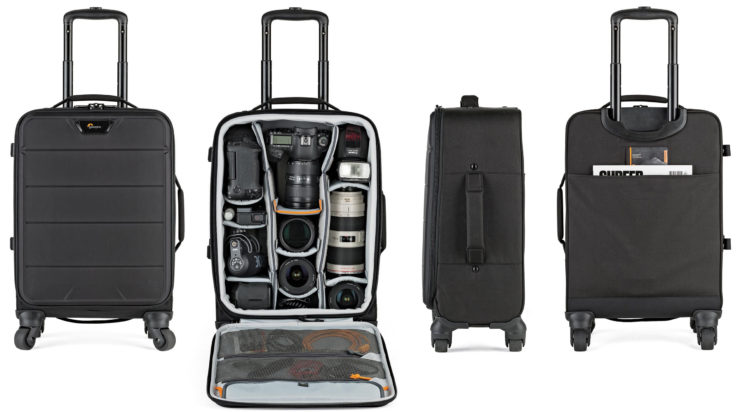 Also on the exterior is the trio of handles. There’s one on the top, side and bottom. You might wonder what the point is of a handle on the bottom. Well, I happen to have one of these new PhotoStream SP 200 bags (review coming soon) and I’ve already found two instances where this was extremely useful. The first is pulling it off the overhead rack after the long train journey home from The Photography Show, and also for lifting it in and out the boot (trunk, for the Americans) of a taxi. In both cases, being able to grab both ends of the bag (rather than an end and a side) with a pair of handles makes life so much easier. Of course, there’s the pullout handle, too, for when you’re wheeling it around, and also a pair of straps on the side for holding a tripod. 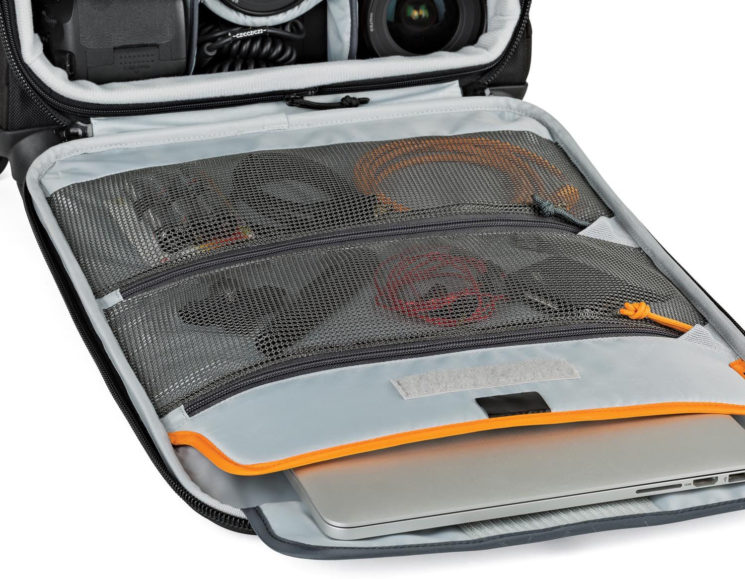 On the inside of the front cover, there are a couple of zip-up netted pouches for memory cards, lens cloths, USB cables, spare batteries, etc. The main area of the bag itself holds a whole lot of gear. At the moment, I’m in the process of moving house and right now the SP 200 is holding 2 DSLRs, 17 (yes, seventeen) Nikon & M42 lenses, YI 360 VR, and Tascam DR-100 recorder. And it still has room for another 4 or 5 small lenses in there.

As one would expect, there’s the usual array of foam dividers, with a couple of special types. One is an extra reinforced divider for big heavy lenses. The other contains a pocket in which you can store spare memory cards, lens cloths, etc.

The inside of the case isn’t completely flat when laid down, but this is a good thing. It means you’ve got a bit more room inside there, especially if your lens sits a bit lower than your body, perhaps if it has a tripod collar & foot sticking down. But when you do need it flat, a couple of foam padded blocks fit in to fill those voids and give you a nice flat even surface for all your gear. 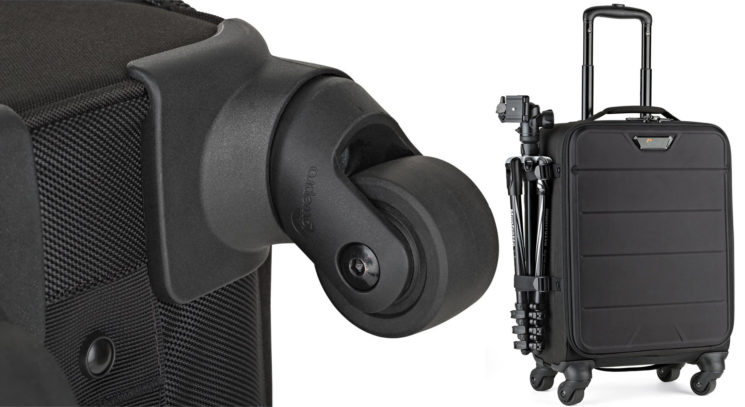 The Lowepro PhotoStream SP 200 roller case is available to pre-order now for $299.95. I haven’t been given an official release date yet, although B&H expect to ship on April 17th (they’ve already pushed this date back once so far, though).

As I mentioned, I have one of these bags and I’ll be giving it a good testing over the coming weeks to see how it stands up to use. So, expect a review coming soon.

This roller case is one feature away from being perfect

After 16 years, I’ve finally found another backpack that I love – The Lowepro ProTactic BP 450 AW II