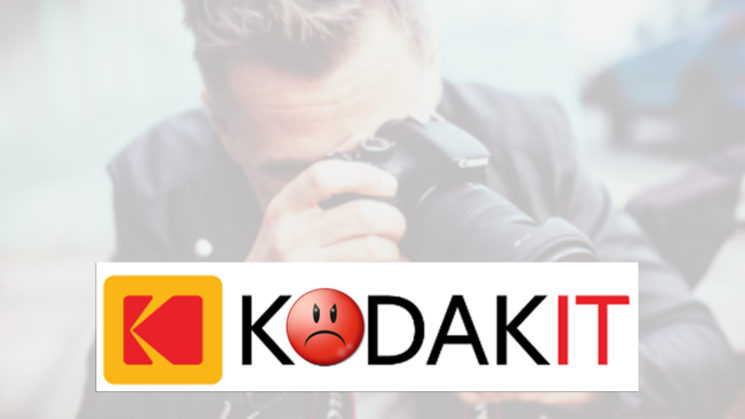 In early 2017, Kodak introduced its on-demand photography service Kodakit. While it may have sounded like a good idea, it turns out that the service is not on photographers’ side at all. All participating photographers are asked to give up all copyrights to the photos they take. The photo assignment agency also requires them to give up the moral rights and assume all legal risks of their assignments. And as if that weren’t enough: there’s also the possibility that photographers might not get paid if clients don’t like the photos.

Kodakit is a Singapore-based company, connecting photographers with potential clients in 92 cities in 37 countries. In a way, it’s similar to Uber, and it functions through an app. Since it was launched, it has worked “with three to four thousand photographers across the globe,” PDN reports. But the rights-grabby terms of the company have apparently screwed over all of these photographers.

First of all, the agreement strips every participating photographer of her or his copyright to the images they produce. This includes even the outtakes. In legal language, it looks like this:

Photographer agrees that Client shall own all Work Product resulting from the photographic services performed by a Photographer and that all copyrightable works that constitute Work Product (including the Commissioned Photos) shall be deemed to have been specially ordered or commissioned by Client and Photographer hereby perpetually and irrevocably assigns to the Client upon creation the entire copyright, including all rental and lending rights whether vested, contingent or future in the Work Product (including any associated intellectual property rights), and all rights, title and interest (including a right of action) in the Work Product upon its creation whether now known or hereinafter created to which the Photographer is now or may be in the future entitled by virtue of, or pursuant to, any of the laws in force in any part of the world and to hold the same to Client, its successors, assignees and licensees absolutely, for the whole period of such rights for the time being capable of being assigned by the Photographer together with any and all renewals, revivals, reversions and extensions throughout the world.

Personally, I think that this is outrageous. But it isn’t all. Additionally, photographers are also required to give up their moral rights. According to the contract, “moral rights” are “any rights to claim authorship of a work, to object to or prevent the modification or destruction of a work, to withdraw from circulation or control the publication or distribution of a work, and any similar right […]”

Photographers are not only required to give up their copyrights and moral rights, but they also bear all the risks. According to the agreement, all services will be performed entirely at the photographer’s risk, “and Photographer assumes all responsibility for the condition of tools and equipment used in performing such services.” There’s also the risk that they won’t get paid if the client doesn’t like the work. And as for the photographer’s expenses: the client isn’t obliged to cover them.

So, all in all, you risk not getting paid for your work, but you need to give up all the rights you have over the images you produce. Lovely.

PDN contacted Kodakit’s chief marketing officer Natasha Adams. She said that “these are high volume transactions that are supporting new business models, and unfortunately the traditional way of supporting photography cannot scale to those business models.” She added that photographers gladly do these gigs despite the risks, apparently. According to Adams, a lot of them are amateurs just getting out of school, so this is “a chance for them to learn the trade.”

On the other hand, PDN reports the words of Mickey Osterreicher, general counsel of the National Press Photographers Association. He said that “it is extremely disappointing that a company whose name was once synonymous with photography would promote a program that strips photographers of copyright and so unilaterally favors the client that it resembles a contract of adhesion.” And this is something I agree with.

Adams said to PDN that not all photographers agree to these terms, but the company is transparent about them. Still, whether it’s “learning the trade,” “working for exposure,” or whatever, I think that these terms are utterly unfair. Although in the digital era it’s not so easy to prevent people from stealing your photos, copyright still protects you and gives you the grounds for legal action. Not to mention that these “amateurs just getting out of school” will bear some other great risks if they agree to these terms.