We have just over a month and a week left for our “how I took contest” and I wanted to share one of the great submissions by Evil Flip about creating a built in variable ND filter. It’s a bit risky as you’ll be hacking near your sensor, but the results are surprisingly good. 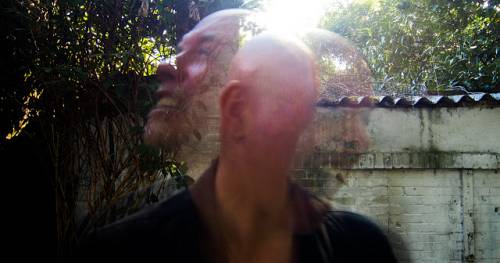 I took this picture by using a long exposure and since I wanted to shoot outside I needed an ND filter. I’m more of a video guy and when shooting video with a DSLR you really need an ND filter if you want control over your aperture. Since you’re stuck with a shutter speed of 1/50, shooting outdoors can force you to close your aperture and this doesn’t really give you that nice blurry filmic background. This is why professional video cameras sometimes have an ND-filer build in. And so I figured I’d try to do the same.

I don’t really believe in explaining every detail in how I make something, as I want people to think for themselves, since this usually evolves into something better. But this is a very simple build. No drilling, hammering or welding. Just a little bit of glue and cutting with scissors. So as long as you don’t run, you’ll be fine. 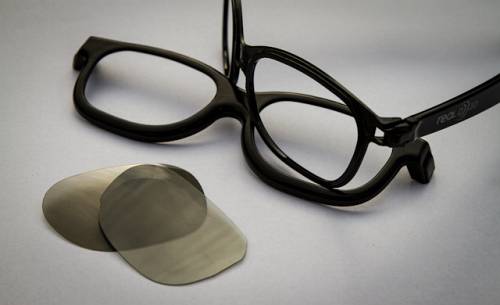 Ok, so I lied. Sorry, it’s not completely free. You need 3D glasses. But I imagine most people have a pair of these glasses lying around somewhere, so if you don’t have any you could always ask a friend. You could also go to the local cinema to ask if you can buy one. I assume they won’t cost more than a few bucks. Or, I don’t know, you could just go and see a movie in 3D.

Do make sure the movie uses polarized ‘Real D’ glasses, not those big glasses that flicker. And if the movie uses green and red glasses you might have traveled back in time, in which case making an ND filter probably shouldn’t be on the top of your list (and try to avoid kissing your mom).

So these glasses are polarized and I discovered that these can cancel each other out in the same way as using two polarizing filters as a variable ND-filter. You can put them in front of each other and by turning one of them (clockwise or counterclockwise) you can increase or decrease the light they let through. So if you hold this in front of your camera you can control the amount of light coming in. There are two ways these can be used. One is the usual (and you need an old filter), the other is a bit more daring, but way more effective (and free-ish). 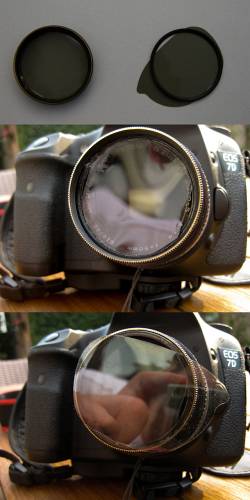 Let’s first look at the usual way. This is by putting the filter in front of the lens. You need an old filter (my local shop has second-hand ones for 5 euros) but you could easily just tape them in front of your lens if you don’t have one (or just want to try it).

What I did was take the original glass out of the old filter by unscrewing the ring that holds it in place. I then simply clued one of the 3D filters into the filter ring (on the inside) and then glued the other 3D filter onto that ring I just took out (to release the glass). And now you can screw that ring (with the 3d filter) back onto the top of the filter (in reverse this time).

That way you can just adjust it the way you like. Do note that these 3D filters only work one way, so make sure that you put them on each other the right way. The right way allows you to make them darker or lighter by rotating the one filter in front of the other. The wrong way gives you either a purple of greenish color.

This method though is a bit restrictive as the 3Dglasses are not big enough to cover most modern lenses. I use it on my old Olympus lenses and with their 49mm filter it works fine but with bigger filter sizes it probably won’t work. Though you I think you could try this with those IMAX glasses, I haven’t tried them but they seem bigger, so you might be able to get up to 55mm or more.

The second way is to put them in front of your sensor, behind the lens. This isn’t that uncommon as most professional video cameras have a built-in ND-filter which is also placed between the lens and sensor.

This will also mean that you don’t have to get multiple ND filters as it works with every lens.

You should still be careful as you don’t want it to touch your lens or have it block the path your mirror travels when flipping up and down. Though you could make something that works like this mosaic anti-aliasing filter which just holds up the mirror constantly.

You’ll just have to figure out what works best for your camera. I assume it should also work on mirrorless cameras. I made mine to fit my 7d. Make one of the filters into the base filter (the one is closest to the sensor) and cut it so that it fits into the hole in front of the sensor, but so that it isn’t in the path of the mirror. With my camera I can fit it in the upper slot, and by making the edges a bit bigger (as shown by the arrows in the picture) I can give the whole filter a bit of a curve (so it won’t tough the mirror). I cut an opening in the top so it can hold the other filter. This one was cut in a circle so I could turn it to the position I need.

Now this make will differ from camera to camera so you might have to do a few tests. The ‘base filter’ for other cameras might need to be a different shape to stay in place. Try to make it fit snug, that way you know it won’t move when you’re handling you camera. When you’ve decided on the shape, just cut it slightly bigger and then cut off the edges little by little until it fits just right.

Do make sure that when you’re shooting video or jpg you do a proper color balance (by using a test picture and the custom setting) because the filter might turn a bit purple or green (depending on the way you turn).

Also make sure that the filters are dust free (but you should to that with lenses too). The great thing is that this method does also protect your sensor from dust when switching lenses. And this switching lenses is now a breeze as you can leave the filter in place, which means you can use the same filter for every lens. This can make the image a bit softer (but I’m hardly noticing any difference) and you have a bit more flaring and glow on bright lights. Some people might like a bit of flare and by cutting a small groove from top to bottom into the base filter you can even imitate an anamorphic flare (comparable to the fishing line trick).

So there you go. If you like my method let me know how you made it work for you camera. The anti-aliasing filters from mosaic are a great example of making something that fits between the sensor and lens, so that might be a good spot for inspiration.

And maybe there are some other ways we can go from here. These glasses could also be used as standard polarizing filters, though I haven’t really tested that and they both (left and right) seem to differ from each other. Other plastics could also be used for other effects. If you use a clear plastic and cut groves in it you make a star filter that fits inside the camera. Still whatever you do, be careful.

Oh and in case anyone is interested in how I made the picture. I put the ND-filter to full darkening (as I was shooting into the sun) and put the exposure to 30 seconds, with an aperture of f8. I used an 11-16mm lens with a 77mm filter size (so a real ND filter wouldn’t have been cheap).

Below you’ll find a picture to shows my set up and how I motivated my model. This method is most effective with men, but usually works only once. When using this method I do advice you plan an escape route beforehand. 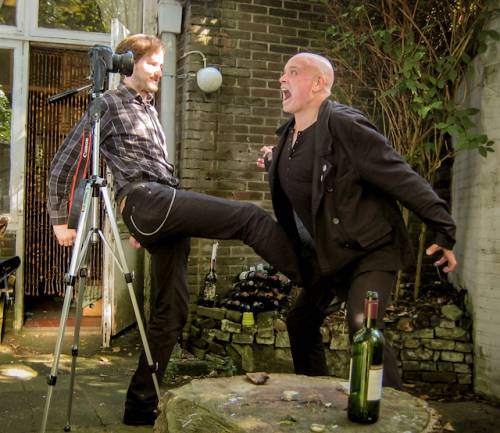 Haida bring the Variable ND filter to the M10 100mm system; a review

« The Hyperscope Is A Super Film In A Can Pinhole Camera
Are You Going to PhotoPlusExpo? Win Awesome Prizes »