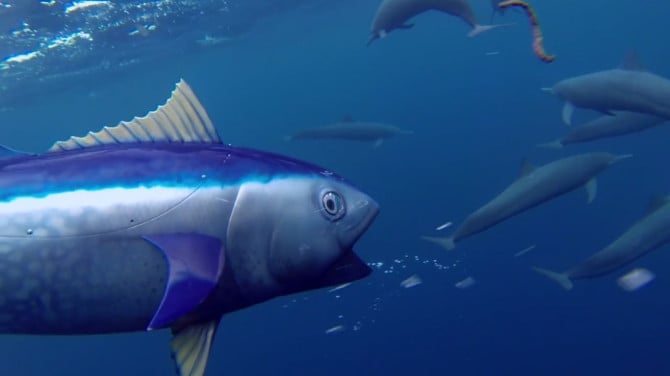 For many years wildlife photographers relied on their unparalleled patience and lots of long lenses capture footage of wildlife. However, as digital technology grows and our cameras seem to be shrinking, professional and amateur photographers alike are enjoying the freedom these compact cameras give them by devising inventive ways to get up close and personal with wildlife without impacting their natural surroundings and behaviors.

In the brief, mini-documentary below, BBC filmmaker and director, John Downer, shows us how his team members have been able to capture immense amounts of rare wildlife footage using some ingenious spy cam techniques.

The project started with EarthFlight, a BBC series that utilized small, modified cameras to document various types of birds such as this robotic vulture spycam. The VultureCam worked so well, photographers quickly got to work developing other spy animals like a Tuna Cam, Penguin Cam, Sea Turtle Cam, and inanimate objects such as spy cam boulders and ice blocks to record tigers and polar bears.

“All the time new cameras are coming onto the market and they’re getting smaller and they’re getting easier to adapt and use and glue into devices. So now with the recent spy creatures  they can actually have cameras in their eyes. We’re continually developing, working with existing equipment, but we also do a lot modification, stripping them down and making them smaller so we can get cameras where, in the past, we only dreamed of having cameras….But, by the end of [Earth] Flight, the GoPros had come on the market and done our job for us and those are readily available to consumers. And that’s I think an exciting development in wildlife filming. There was this leveling out between professionals and the amateurs where it’s now about the vision.”

Downers observation on the leveling of a playing field was, I believe, right on point. While it’s made it increasingly difficult to make a living as a professional photographer or filmmaker, it has inspired us (or forced us, depending on how you view it) to dig deeper into our creative minds to create new techniques and original approaches to capture nature and wildlife in different ways.

Since the DIYP community is such a creative hands on group of photographers, that led me to wonder, have any of you thought about modifying or disguising your drones or similar devices to take your wildlife photography up a notch to super spy stealth mode?