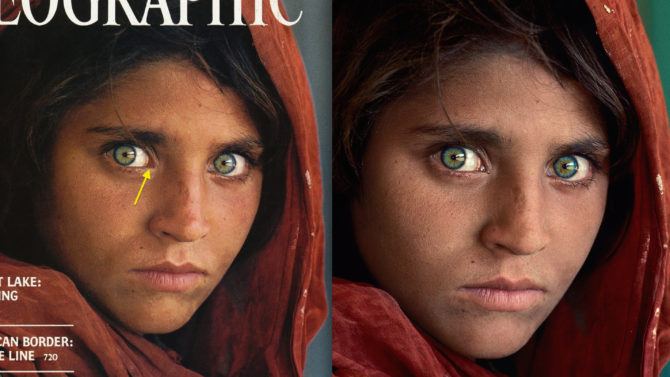 While a follow up was already planned, after publishing the previous post and the subsequent, staggering response generated in support, appreciation, comments, critique and criticism I felt the need to also address certain things as well as perhaps reiterate and underline certain points. I also want to fill certain spaces left over in the previous post.

Let me begin again by reiterating that the previous opinion piece (and this follow up) is not an attack or attempt to defame Steve McCurry, it is only to throw light on certain aspects as well as bring some attention to the questions that plague visual journalism, especially in the past few years.

Firstly and most importantly, I would like to address and elaborate on the argument expressed on the eyes of the Afghan Girl and the apparent discrepancy in the two different published version. It was felt by many that the difference was too small to be highlighted, (which I expected).  I would like to argue that it may be small when comparing the actual size of the discrepancy, but not small when you take into account the history, context and gravitas of the image. The argument can also be extended further into into the impact of Afghan Girl image. Inferring that the overwhelming sympathy and support for young Malala Yousufzai, was perhaps somewhere, subconsciously linked to the impact of McCurry’s image when it was first published would not be wrong.

The missing, muck, dirt and glare from the caruncle eye is very much a part of the character of the Afghan Girl in the image when you see it from the point of view of journalism/ reportage whose ultimate goal is to provide the viewer with a slice of life to enter into and explore the scene and the story as the photographer felt and the way the camera captured it. Altering that slice of life is to begin to alter reality itself, irrespective of whom so ever does it, the photographer, the darkroom/studio assistant or the publisher.The muck and glare are as much a part of the life of a refugee girl living in a camp, across the Afghan desert in Pakistan as the dry lips and the torn head scarf.

Thirdly, linking the two, the apparent discrepancy between the different versions of the Afghan Girl image, should not be looked at from the perspective of how easy it is to alter images in Photoshop now. The software was only introduced in 1990 (six years after the Afghan Girl image was published on the cover) and finally came directly into the hands of photographers much later with the advent of the digital era. Manual alterations have been done on prints (and then subsequently copied onto negatives/ slides from the prints) for quite a while.

To extend the argument further, I would like to bring W. Eugene Smith’s following image forward. 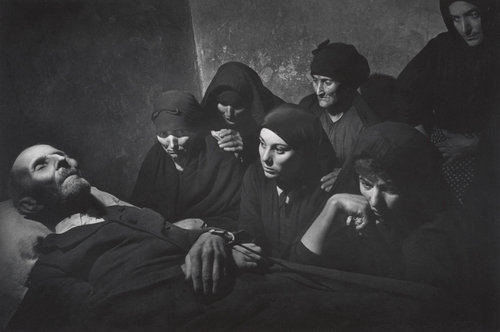 This photograph titled “Spanish Wake,” captured an intimate scene of the death of a villager in a spanish village.  LIFE magazine captioned it as the following- ” His wife, daughter, granddaughter and friends have their last earthly visit with a villager.”

This image was a part of Eugene Smith’s photo essay titled “Spanish Village,” published in LIFE magazine in 1951 which depicted live in a small rural village in Spain.

In actuality, in the original version that Smith photographed, two of the women (one identified as the widow of the person) had been looking into the camera and towards the photographer, delivering a completely different image. Later when printing the image in the darkroom Smith printed their eyes darker and applied bleach (most probably potassium cynide) with a fine-tipped brush to create new white areas, redirecting their eyes downward and thus altering the mood of the photo and ultimately making a completely different photograph. Later in 1956 Eugene Smith famously admitted to his use of staging and retouching in a gathering of American Society of Magazine Photographers.