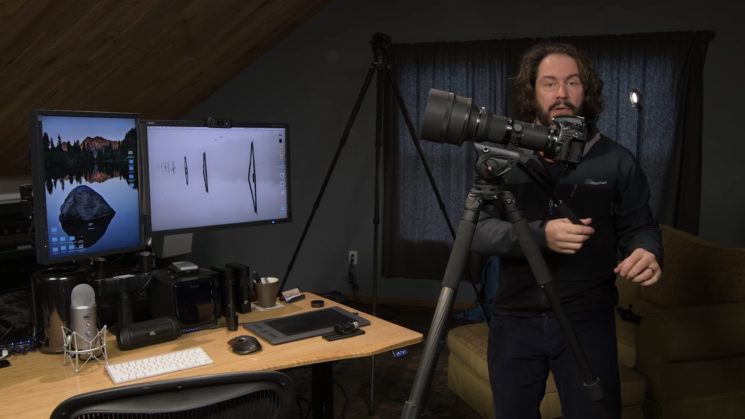 I switched over to mostly using fluid head video tripods for stills photography about 8 years ago. I still have a couple of Manfrottos with ball heads. I also use ball heads with sliders. But, my go-to is a Libec video tripod with a fluid bowl head. They just make life so much easier, especially on location.

It seems I’m not the only one who prefers to work with video tripods for photography, either. In this video, photographer Hudson Henry talks about why he likes to use fluid heads for photography. The advantages he lists are some of the reasons why I also like to use them. If you’re shooting a lot of video anyway, it definitely makes a lot of sense to make the switch, even for stills.

For me, the single biggest advantage, being a location shooter is the whole concept of a bowl head. Often I’m on unlevel or just plain bumpy torn up ground. A bowl head allows me to get the entire head system level independently of the legs. That way, as I pan around my scene to follow my subject, I’m not constantly having to readjust to keep the camera level.

Sure, you can’t flip the head 90 degrees like you can with ball heads and 3-way heads, but do you really need to be able to? Long lenses come with tripod collars. These can usually be unscrewed and the lens will rotate freely within them. L brackets are available for pretty much every camera out there. So, as long as you’ve got an adapter that gives you an Arca Swiss compatible mount, you’re good. Horizontal or vertical orientation is still possible.

Even though I shoot portraits, I want my environment level. I also want it to be level quickly. For landscape photographers, even though they may often have more time to setup a shot, it still makes life easier. If you’re doing stitched panoramics, even with multiple rows of images, the workflow goes so much faster. You can ensure everything is level and that you’ve covered everything you need to.

For sports and wildlife, once balanced, it’ll work equally as well as a gimbal head like a Wimberley. And as fluid heads designed for video are usually built to hold hefty loads, they’ll typically have no problem with big 300-600mm lenses. They can also shift to follow the action pretty quickly, too.

A few years ago, video tripods and fluid heads like these would’ve been too impractical for many. Not to mention expensive and heavy. Over the last few years, though, as more and more have started to shoot video, the prices have dropped a lot. The technology’s also come a long way, too. They’re now lighter, stronger, and cheaper than ever.

I do still have a couple of ball head tripods, and I use ball heads on my sliders. But, the Libec fluid head video tripod is still my go to.

Do you use a fluid head for stills? Have you thougth about switching to one?

« Abstract: The Art of Design – a new Netflix series to inspire all kinds of creatives
Snapchat Spectacles are finally available for online purchase »