Hi, this is Jay P. Morgan. Today on The Slanted Lens I’m back out here where we photographed last week. We photographed this little pizza cart called Dracari’s Pizza. It’s a great little cart with neon lights on it. I’ve been shooting food trucks for the last little while and have really enjoyed it. I still have the Hasselblad X-1 D. So I was not happy with the image I got here last week, it looks strobe-lit. The lighting was not integrated with the scene. And I felt like it kind of missed it. So tonight, I’m going to take that same image. 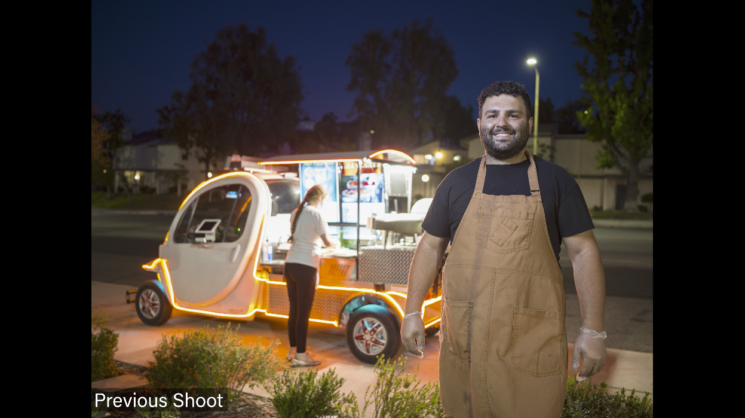 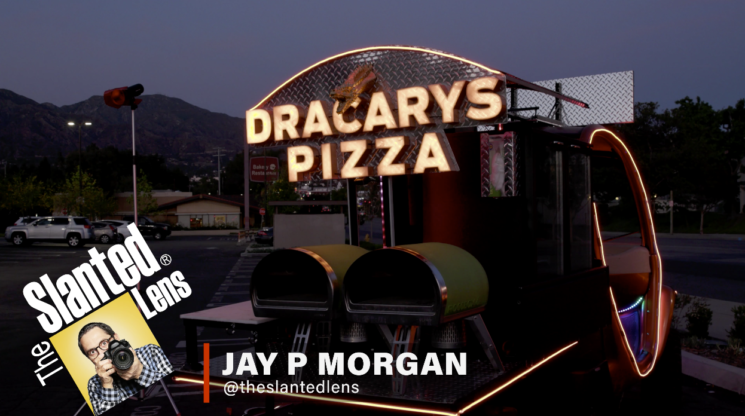 Lighting outside with strobes is a balancing act. We have several things going on. Let’s say from zero to ten with intensity, ten is the sun and zero is completely dark. Well, there are two constants in this equation, and one that is not constant. The one constant is the cart in the background. He turns all those neons on and that’s like a three on the scale. So it’s going to flatline at three. It’s going to always be three. It’s not going to get brighter, it’s not going to get darker, it’s always going to be three. With my strobes, I can dial them up or down. And I can get them to match that three of the cart. So that it looks good on his face with the rim light and things we’re going to use. 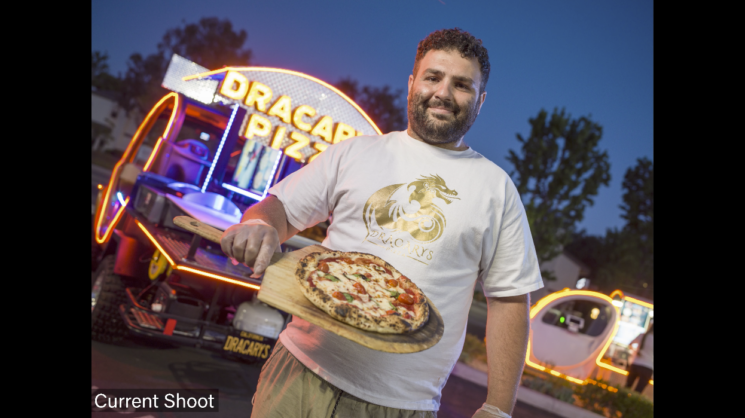 But now the part of the equation here that is going to change constantly is the sun. So the strobes and cart balance off at a three and the sun is up here at a 10. And then the sun slowly drops. Well, when the sun crosses the line at three, I’ve got about 5,10, and maybe 15 minutes where I have a stop to play with. And where I can get the cart correctly exposed and my strobes are correctly exposed on his face. And the sun is bright enough in the background that I can see some blue in that sky and it just looks really interesting. So that’s the balancing act. So we’re going to balance the strobes to the cart. Now we’re going to watch that sun go down. When it hits the right point, we’re going to shoot like crazy. 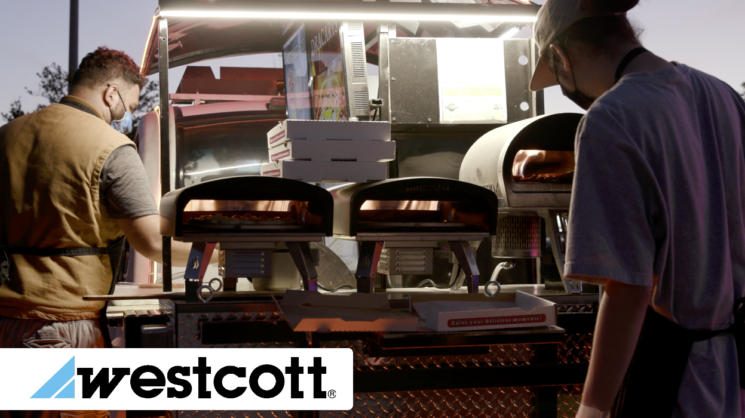 Okay, so number one is where you place your light. If the light is on the right of your person in the background, then put your key on the right of the person. It doesn’t matter if the light from the background couldn’t possibly be lighting his face. It’s a matter of getting it on the same side that visually the viewer is looking at it and saying, “Oh well, there’s a light to the camera, right. Well, then your key should come from the camera right.” And that feels comfortable for the viewer and it works. So put your light on the side that is motivated by the lights you have in the scene. 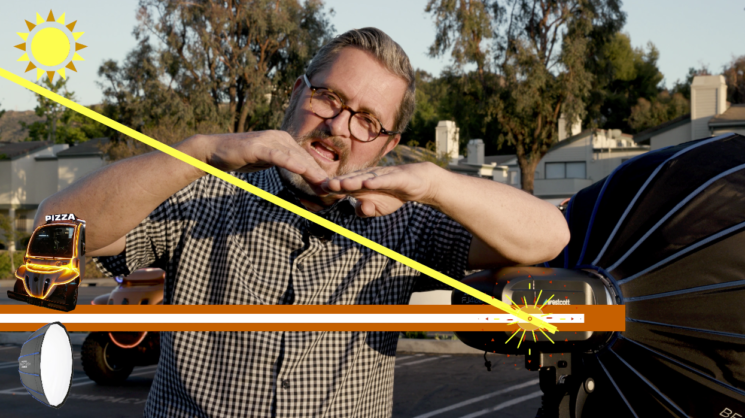 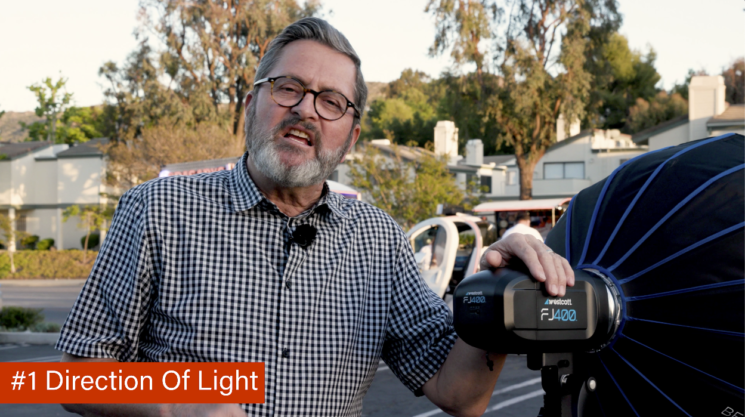 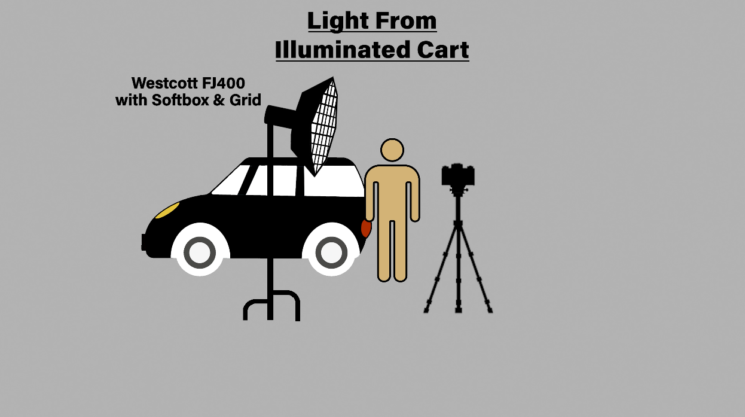 Now number two is the color of your light. If the background is kind of a warmish color, don’t leave your strobe at 5600 degrees. Warm it just a little bit. I’m talking about a quarter sun or a half a sun. It doesn’t have to be huge as all the way to 3200 degrees, but just warm a little bit. It will feel more comfortable with the scene in the background. It’s going to feel more seamless. I’m going to use a beauty dish with a grid because I want to keep the lighting from falling onto his legs. And then I’m going to put a quarter sun inside of it, just so you can see it. If the scene is very cool, then cool it just a little bit. Not a lot. I’m talking about just taking the edge off from it and moving the color balance just a little bit away from 5600 and closer to tungsten or to something more blue. 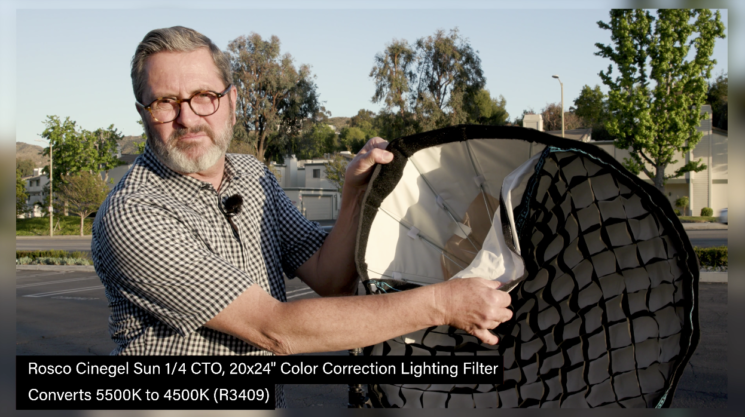 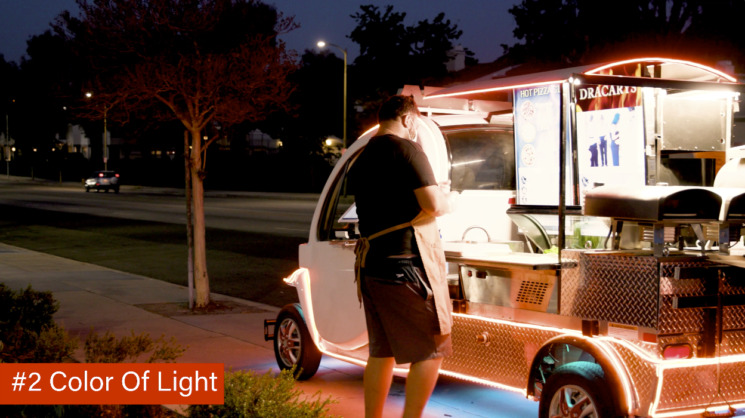 Number three, your rim lights are really important. They’re key to integrating your person into the background. If I’m looking at my image, and I’ve got a red light on the right side of my person, then I’m going to put a red rim on that same side. It’s going to get a little red light on his face. And it’s going to look as if the cart is lighting his face. It’s not, but the viewer thinks and makes that connection. Same on the left-hand side. I’ve got blue up in the sky on that left-hand side. I’ll put a blue rim light on that left-hand side and it’s going to make it feel as though the light is coming from the right and left from behind and it integrates him better into the background. 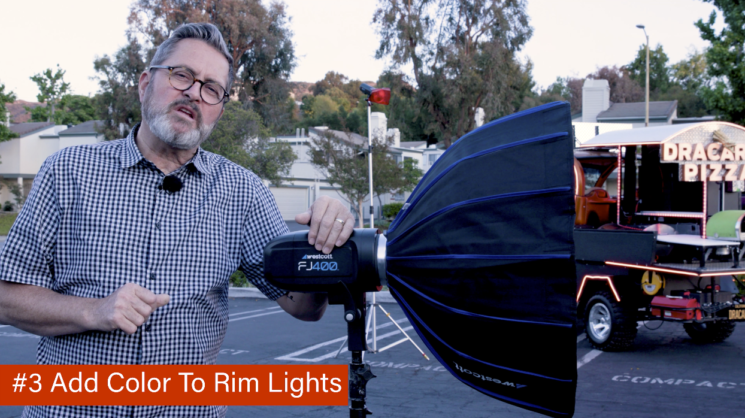 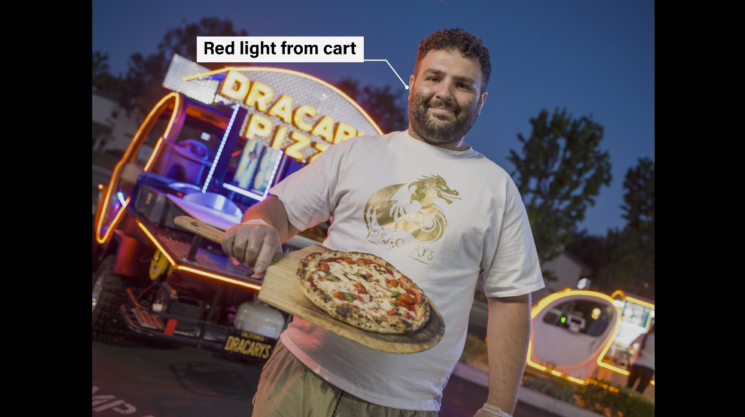 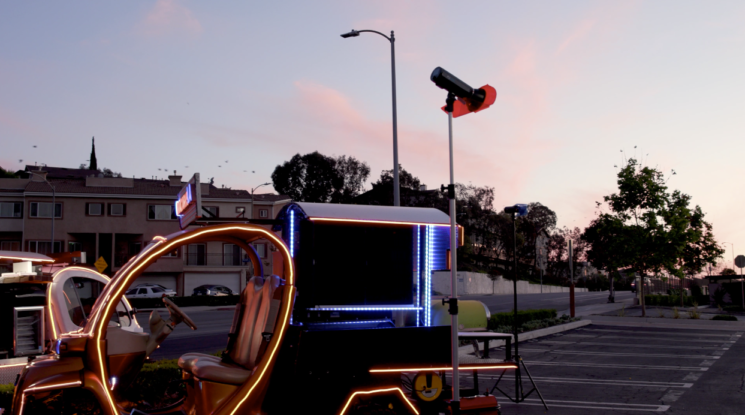 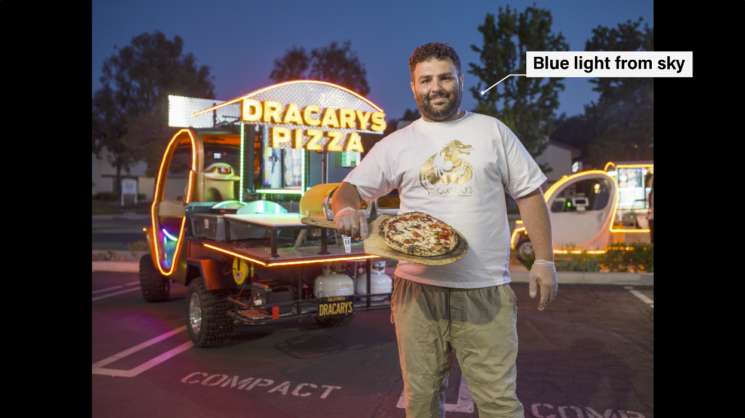 Number four is to drag your shutter and open up the shadows in the background. Now your shutter is going to affect the lights that are on the cart, the practicals as well as the background light. So you want to make sure you don’t make your cart too bright. There’s that moment where the sun’s going down and it crosses the line of the intensity of the lights on your cart. At that moment, you have about 15 to 30 minutes to shoot. You can drag your shutter to make it a little longer. But eventually it’s going to get too long. It’s going to overexpose the lights on the cart. But what this does for me is it opens up the shadows. That gives me a much nicer look to the image. The person feels more integrated into the scene because we see a little detail in the trees in the background. We see that deep blue in the sky and it makes the image much nicer. 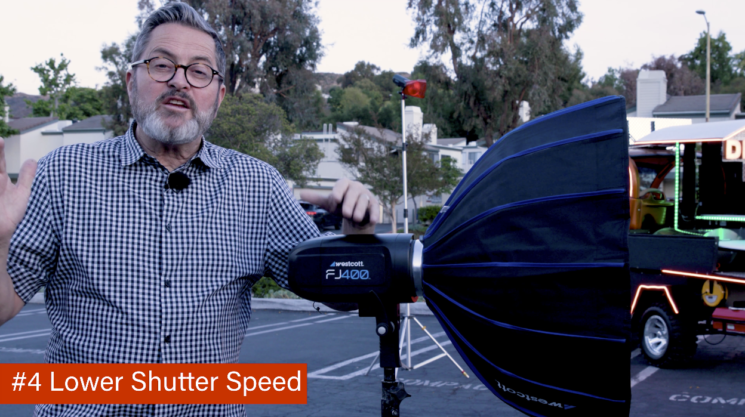 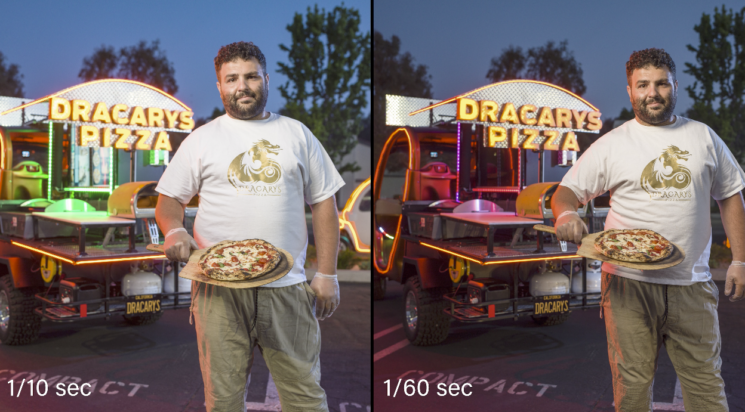 Number five, be subtle with your strobe. Either use a grid, which I love because it narrows the area of coverage. And now you can just light the person’s face and upper body and the light starts to fall off. Anytime light gradates It feels more comfortable like it’s natural lighting that we see every day. If you don’t have a grid, then just feather the softbox. Tilt it up to get it off the ground, off the shirt and feather it towards the camera. Aim the light towards the camera. What that does is now it takes it off of the background and it’s going to make it look much more natural and much more subtle like a soft handed approach to using a strobe. Rather than aiming it straight at the subject and it just looks blown out and overlit. 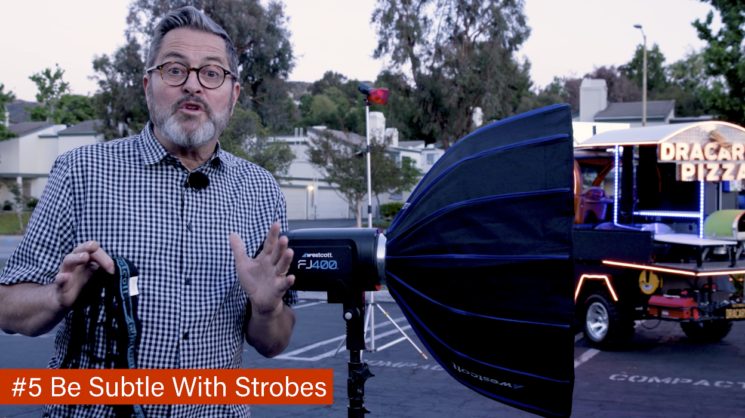 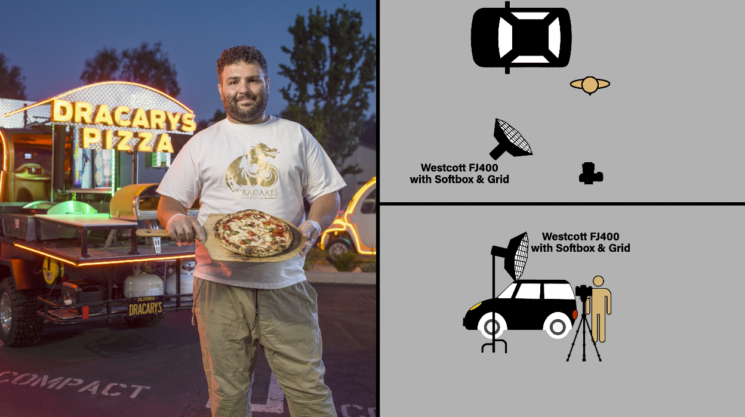 Let’s take a look at this lighting breakdown. There’s my key light with that beauty dish up front feathered up and it has a grid on it. There’s the rim light from behind on the camera left side with a red gel on it. It gives a little bit of red cast on his face. There’s a rim light on the camera right sidegiving a little bit of blue light that integrates with that blue background back there. Now I’m going to lengthen the shutter to give myself a nice blue background. 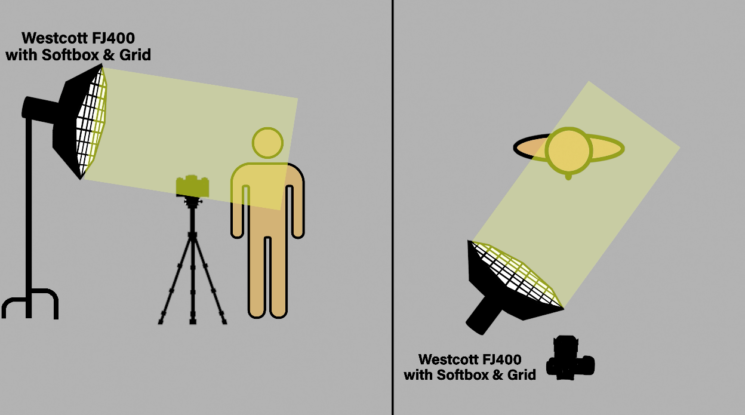 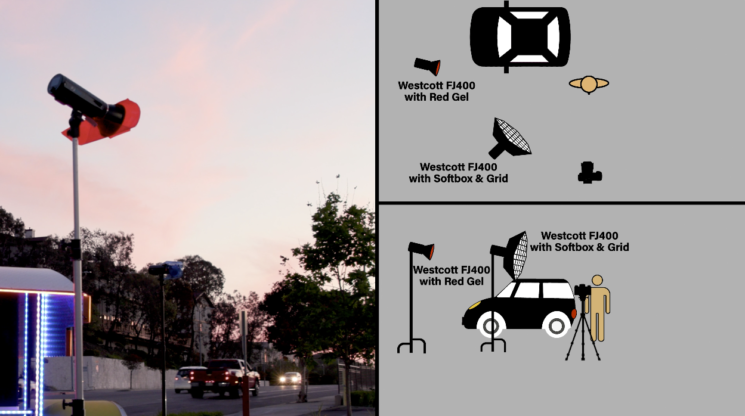 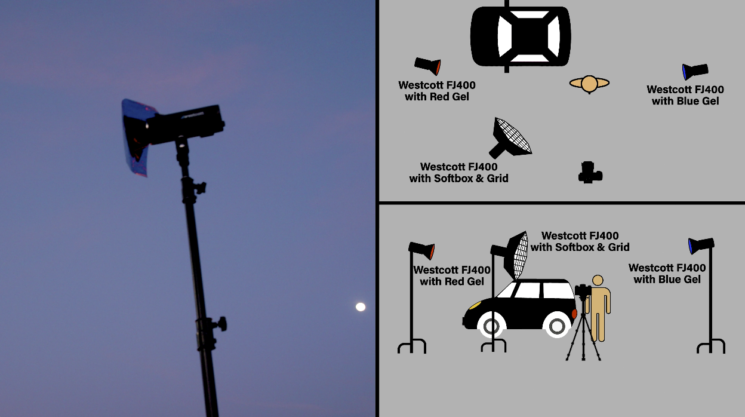 So here’s a portrait I did the other night. It was nice enough, but it needed something. Here’s that same portrait, using those five principles. It makes a huge difference. 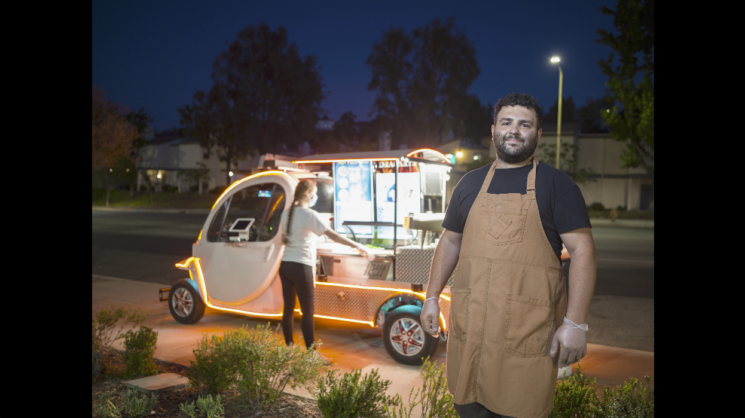 So there you have it, five tips on how to use your strobes to integrate your person with the background and feel like they’re not strobe-lit. I love lighting with strobes and if they’re done correctly, it looks fabulous.

So make sure you subscribe to us here at The Slanted Lens. Leave us a comment on our YouTube channel. We’d love to hear from you. Post some of your images over on our Facebook Community Group. Go over and check out our downloads at TheSlantedLens.com and keep those cameras rollin’ and keep on clickin’.

Who needs the sun? How to make your own golden hour