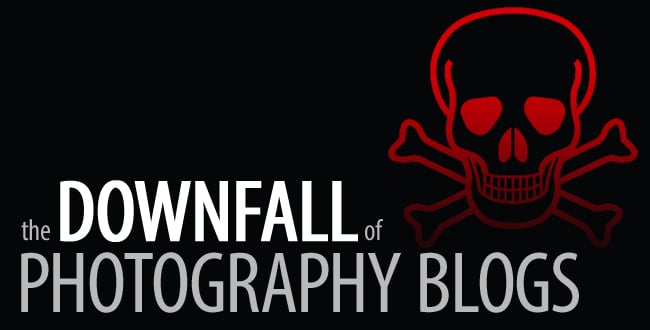 There is a problem plaguing photography blogs, waiting in the wings, ready to ensure their demise. And, as all of you armchair pundits are excitedly clicking to the comments section to inform me of my blatant hypocrisy, allow me to save you the effort and admit right here: I know there will be multiple examples of hypocrisy throughout this post. Good…I saved you thirty seconds of valuable input.

Certain issues have besieged every medium throughout history and have invariably worked their way into every facet of our lives, so photo blogs are not alone. One problem arises that, when a particular medium becomes more accessible to the average Joe, you begin to see an influx of voices crying for attention and a surge in differing information. It happened with books, where any maniac began putting their expertise into print. It’s happened with television and the countless talking heads who drone on throughout the day. As Lewis Black’s script writers so eloquently put it in Man of the Year, “TV scares me. It makes everything seem credible. … If everything seems credible then nothing seems credible. … On one side, there’s this certifiable lunatic who says the Holocaust never happened. And next to him is this noted, honored historian who knows all about the Holocaust. … Everything they say seems to be credible. And so, as it goes on, nothing seems credible anymore! We just stopped listening!” Hell, that’s been around since the concept of verbal communication revolved around grunts and groans!

And, so, we have photography blogs, the number of which seems to be increasing every day. We have giant, industry-leading blogs that hit us with the news and opinions from the Big Guys. We have individual blogs where a photographer touts their views and expertise. And, we have everything in between, including photography learning blogs and blogs about creating your own gear (yes, a shameless plug). We have Photographer A moaning about how “all these amateurs” are ruining the industry, while, on the other side, we have Photographer B who claims that aspiring amateurs are actually strengthening the industry and that the sands of time will separate the wheat from the chaff. Photographer Q lambasts those who don’t spend $20k on their gear while Photographer K blasts Mr. Q for being a gear snob. Photographer C publishes an article listing the ten most stupid photographic practices while Photographer G believes she is a successful entrepreneur BECAUSE she carries out a number of those practices.

Photography blogs are also readily falling prey to the BuzzFeed mentality, inundating their readers with posts about how “you won’t believe how these pictures were captured” or “372 Photos You Won’t Believe Aren’t Fake.” While that trend was great at its peak, many readers are becoming wary of it and annoyed with the tactic. And, there’s no faster way to lose readers than by annoying the bloody piss out of them. (NOTE: While blogs are great, if you observe blood in your urine, please contact a medical professional for further assistance.) And, like was mentioned above, if everything is the “best” or “most unbelievable,” then nothing in best and we no longer give a crap about believing any of it.

But, the greatest problem lurking in the shadows is not confusing or annoying readers to the point of throwing their hands in the air and screaming, “Fudge this spit!” The greatest problem plaguing photography blogs is an undiscerning readership. Today’s society has been programmed to act like a herd of mindless sheep simply following the voice of their shepherd wherever he might lead. We aren’t taught to analyze. We aren’t taught to think. We are taught to do what we are told and blindly swallow what the alleged experts are telling us. If you don’t believe me, take a look at higher education — young people are conformed to believe their only path to success is to saddle themselves with tens of thousands of dollars of debt so they can spend four years sitting in a room echoing what an instructor is telling them, and those who question this process or the academics taught are ostracized.

So what happens when you have a herd of sheep thrown into a vast field with countless shepherds calling for their attention? Chaos. Lack of progress. Animals dashing from one leader to another. And, in the end, all you are left with is a bunch of exhausted livestock that went nowhere in a field that is now trampled and muddy and good for very little.

As this trend continues, readers will weary of not being able to simply swallow every opinion or piece of advice and still find success in their careers. Just like a person who spends their lives pursuing meaning by following one religion after another, they will eventually slap all photography blogs with a label as “worthless.” A lack of discernment will cause them to throw it all away rather than sift through the information to find that which is of relevance and worth listening to. Readership will decrease, advertising will flounder, and the feasibility of continuing operations will come to a close. But, perhaps that would be for the better anyhow…

Multiple voices AREN’T bad. In fact, the chaotic din brings a paradoxical sense of order and ushers in a whole realm of creativity and drive. But, I’m not discussing that, just like I’m not discussing how Lisa Frank was actually a Soviet spy on a mission to control our minds with neon-colored unicorns.

What I’m saying is, for the love of all things holy and a few that aren’t, wake up, think, and stop drinking the Kool-Aid from every source that tries to pour it down your throats! Don’t necessarily write it off, but be willing to challenge it. Stop running from one social media cult leader to another because they dazzle you with their charisma, fanciful images, or exciting, new techniques! If it wasn’t for the mindless masses, half these guys might actually be forced to create genuine work rather than host a weekly video broadcast!

Think for yourselves, and stop trying to be a clone of everyone else! For, when you tire of aimlessly running with the herd, the only one you are left with is yourself.