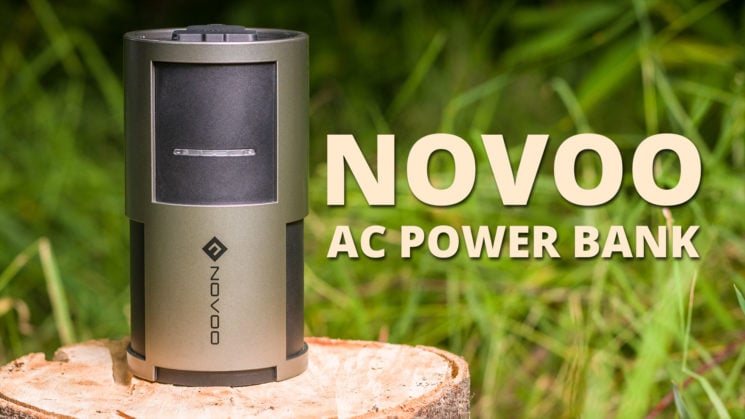 I’ve been keeping an eye on portable power options for probably about a decade now. Most of my work is on location, I’m often away for several days at a time, and much of my equipment requires power or some kind or another.

Recently, I was asked if I wanted to check out the Novoo AC Power Bank. It looked an intriguing little unit so I agreed to have a look. While I waited for it to arrive I was expecting to be entirely underwhelmed, but it’s actually really impressed me.

With a total capacity of 72.36Wh and a maximum current of 60 Watts, you’re not going to be plugging big strobes into this thing. Fortunately, that’s not a need I’ve had since switching from Bowens to Godox strobes. And what it will happily do is charge those Godox lithium-ion batteries. But we’ll get back to that.

The unit itself is cylindrical in design and pretty compact. It’s 8cm (a little over 3″) in diameter, and 15cm (about 6″) tall. So, similar in size to something like a travel mug. So similar, in fact, that some of the advertising material for the device shows it in a car’s cup holder. 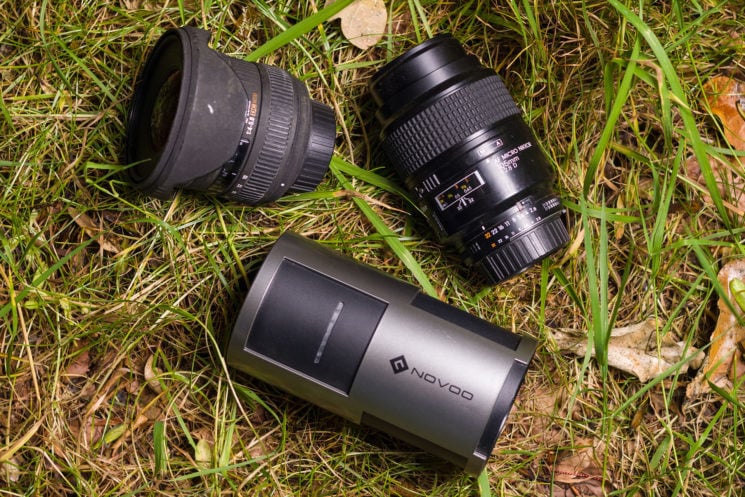 This size also means that it’s actually pretty close to many lenses. In length, it’s not much longer than my Nikon 105mm f/2.8 Macro and in diameter, it’s pretty much identical to the Sigma 10-20mm f/4-5.6. So, it should easily fit into most camera bags wherever you might choose to stick a lens. 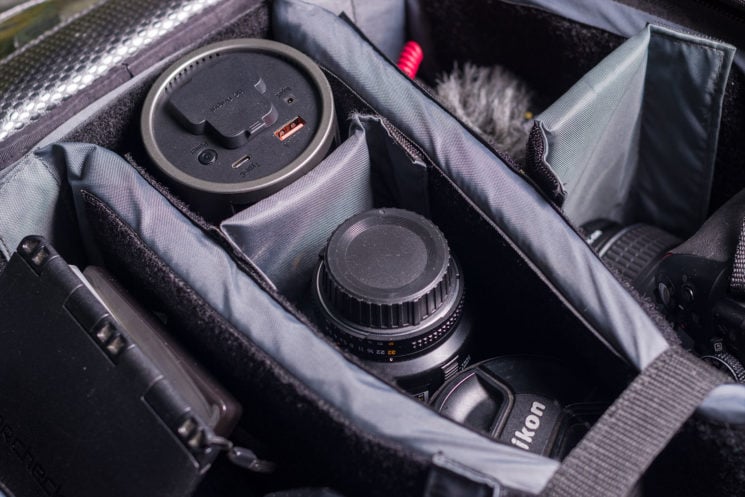 Mine weighs 612g, a little less than the advertised 680g, so that’s nice, and the build quality feels great. While plastic, it doesn’t feel like a cheap toy. It’s nice and solid and doesn’t feel out of place with the rest of my kit.

On the top of the unit are various sockets. There’s a 19v input to charge the unit, a Type A USB socket capable of putting out 5v or 9v at up to 2A, and a Type C USB socket that can put out 5v at up to 3A. 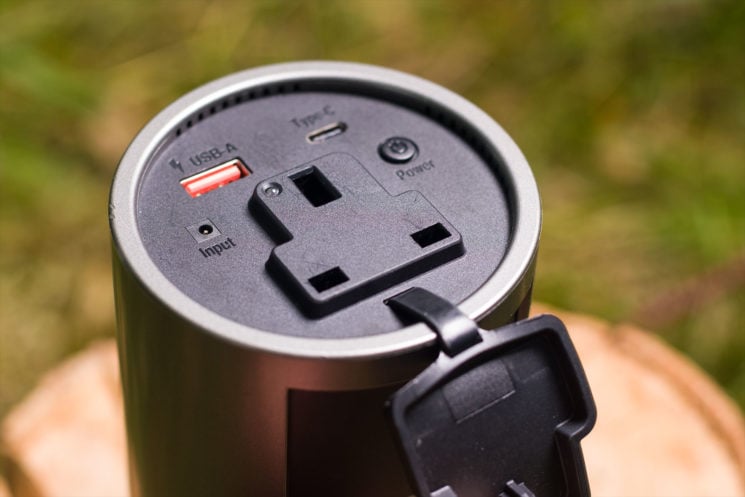 As well as these, and this is what makes the Novoo so great, is that there’s an AC power outlet. Exactly which outlet you get will depend on where in the world you are. Mine has a 220v 50Hz 3-pin UK plug socket. But it’s also available in 110-120v 3-pin for US plugs and various other varieties. 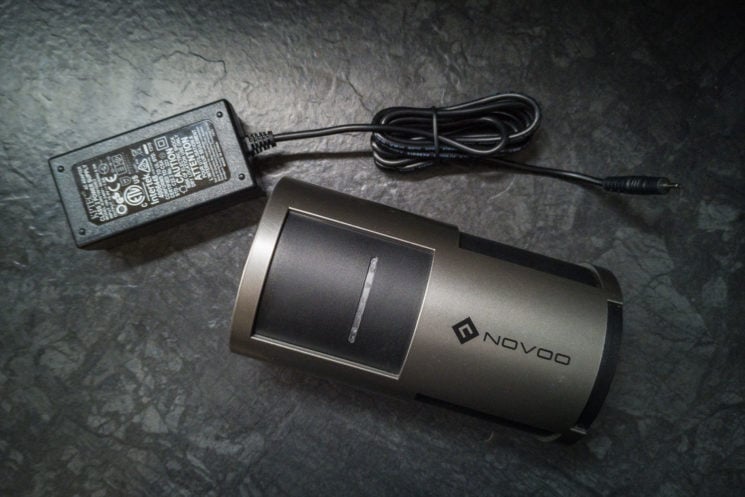 The Novoo charges from a 19v 1.6A charger, which comes supplied. It takes about 3-4 hours to fully charge the device from flat.

How much can it power?

The unit features over-current protection that will shut the device down in the event that something tries to draw more power than the Novoo can deliver.

As I said earlier, you’re not going to be powering big strobes off this thing. It’ll just shut off as soon as it tries to charge up the capacitors. But to put the over-current protection to the test, I pulled out my trusty Spekular LED lights. 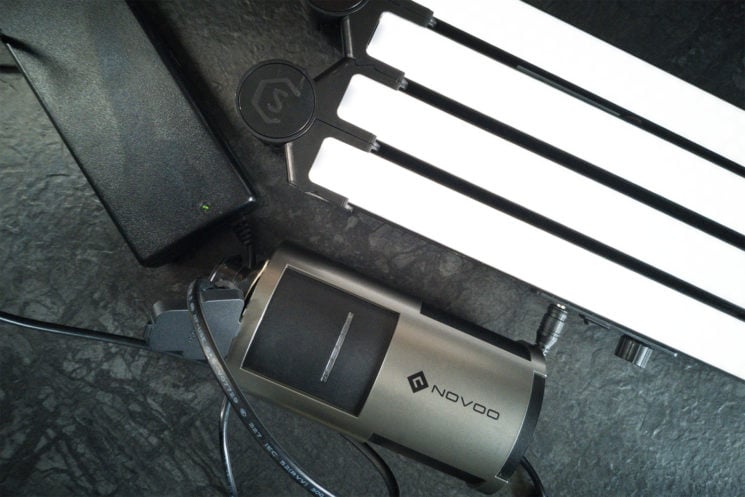 Spekular LEDs are 14.5 Watts per segment. A single set of four segments means a total power consumption of 58 Watts, just under the Novoo’s rated limit. But I have two sets of these, bringing that load up to 116 Watts, much higher than the Novoo can deliver.

I began by plugging four segments into the Novoo’s AC outlet on a low power setting. It didn’t seem to flicker or struggle, so I started to turn the brightness up. Eventually, I got all the way to full power, and the little Novoo continued to deliver the power. Fantastic.

But when I connected up both sets, for 8 total segments, it was a different story. I set the Spekular power to minimum and turned them on. As I slowly turned up the power I could see the LEDs getting a little brighter and then suddenly they cut out completely.

I knew it shouldn’t be able to handle all 8 Spekular segments, but I wanted to see how quickly the over-current protection would kick in and how effective it was. The last thing you want is to have a device pulling too much current and setting wires and batteries on fire.

At full power, with 58 Watts of current draw using 4 segments, that 72.36Wh battery should last around an hour. Which is pretty impressive. And unlike my last portable power solution for Spekular, this one doesn’t void the warranty. It’s also much cheaper, and more versatile than buying V-Mount batteries, which would last a similar amount of time.

The next task, of course, was to test the USB sockets. I have both an ASUS ZenFone 5 and a ZenFone 4. When I’m out on location, these come in handy as scouting & behind the scenes cameras. And with their big screens, I often use them to review photographs and video footage at the end of a shoot. So, they see a lot of use, and their battery can easily be drained by the end of the day. 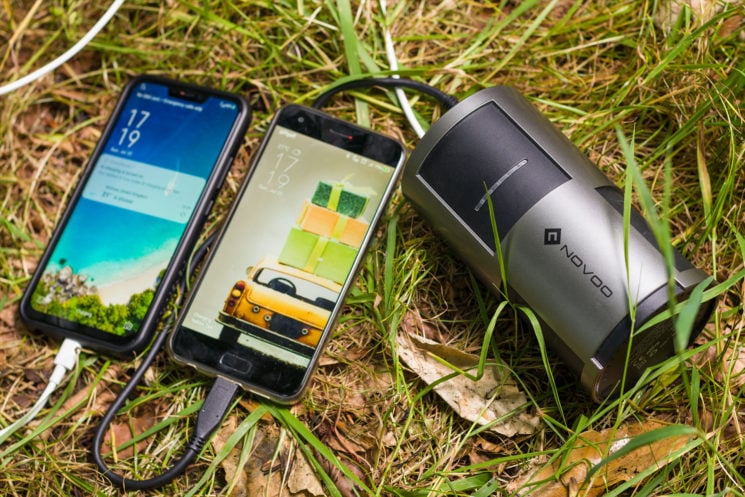 So far, my longest trip away since getting the Novoo has only been a couple of days, but I managed to charge up both my ZenFone 4 and ZenFone 5 twice each without issue. The battery still showed 20-40% remaining, and it easily charged them as fast as my regular AC powered charger here at home. 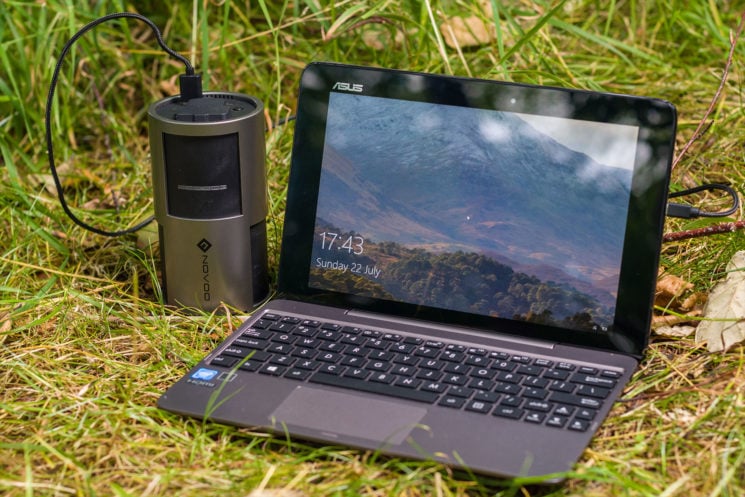 It also had no problem with my ASUS Transformer Book 2-in-1 over USB from completely flat to full, with enough power left over for a phone charge or two.

And if 2 USB sockets aren’t enough for you, there’s absolutely nothing stopping you from plugging a regular AC powered USB charger into the Novoo to provide more sockets. Just make sure the charger you’re using doesn’t draw more than 60 Watts.

Then, of course, there are camera batteries. Those also need charging. If I’m shooting video, I could burn through half a dozen of those little Nikon EN-EL14 or EN-EL15 batteries in a day, easily. Both the official Nikon chargers and my 3rd party chargers work great with the Novoo to get those batteries fully charged again, just as quickly as if I were at home. 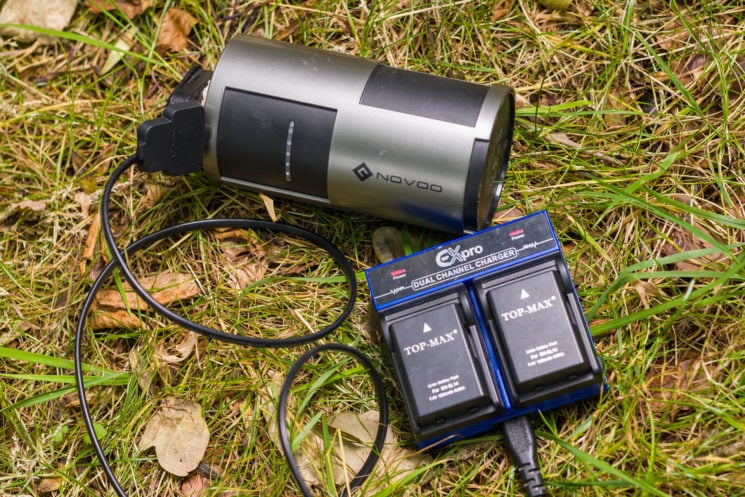 But where it really comes in useful for me, I said I’d get back to this, is charging up flash batteries. Again, you’re not going to be plugging big wired strobes into this thing. Even a 200Ws strobe can draw 600-800 Watts immediately after firing, and that’s way beyond the limits of the Novoo.

But I ditched my AC powered Bowens Strobes in favour of Godox AD360II lithium-ion powered strobes early last year. I also have the Godox AD600Pro and a Godox AD200, which are also powered from lithium-ion batteries.

Just this week on a shoot, I forgot to charge up the battery for my AD600Pro the night before. When I arrived at the location, it was virtually dead. Normally, when you’re shooting in the middle of a forest with the nearest plug socket a mile away, that’s a problem. 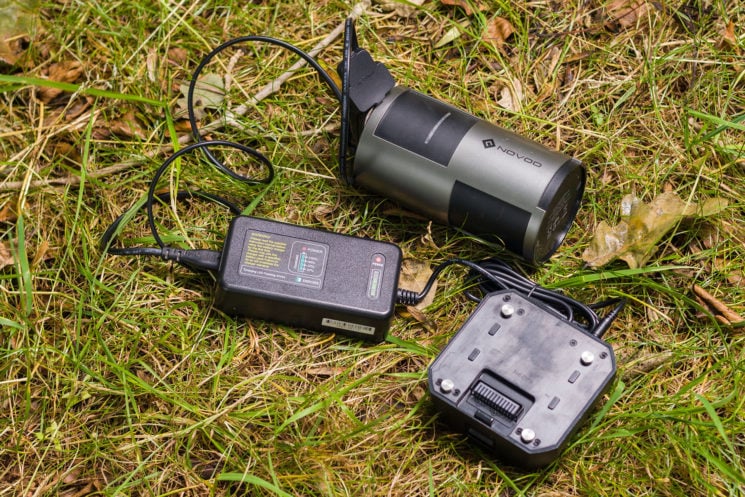 A couple of points…

One thing that does concern me a little about the Novoo, is the connector on the power supply used to recharge it. It’s a barrel connector, like those found on many devices, except it’s really tiny. For comparison here’s the charger’s lug next to a standard 3.5mm TRRS. 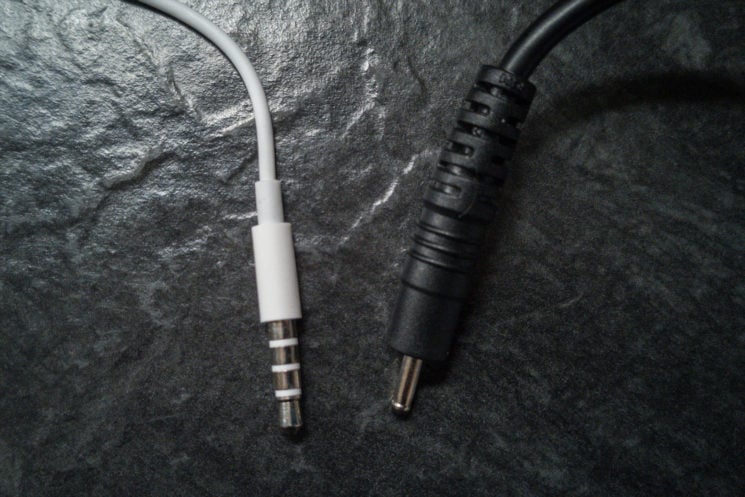 I could see this bending or snapping off, leaving you unable to charge the Novoo if you’re not careful. So, it would be nice if that were a larger barrel jack that was a bit more substantial. With a 19v output, it may be difficult to find a replacement charger with the correct barrel jack in the event that it does break.

My only other complaint is a lack of a car charger. As I mentioned earlier, one of the Novoo’s advertised selling points is its size and that it can fit in a car’s cup holder. So, why can’t my car charge it, too? It’s not a dealbreaker, certainly not for me, anyway. But it would make sense, on a road trip to be able to charge it from your vehicle – of course, you could always get an inverter for your car.

I used to take half a dozen USB batteries with me whenever I went away shooting. Even if I was just going away for one full day. This helps to ensure that my phones and other devices can remain charged. USB charging adapters for camera batteries are painfully slow, and USB batteries really have no hope at all of topping up things like laptops or strobe batteries, or powering continuous LED lights.

The Novoo replaces all of those USB batteries, with more power and versatility and an overall reduction in size and weight. Yes, it’s bigger and heavier than a single USB battery, but it’s a smaller and lighter package in my bag than half a dozen of them.

It’s rare that I’ll be away for a full day’s location shoot and need more power than the Novoo holds. Perhaps, I’ve forgotten to charge a whole bunch of stuff before I leave or I just need a lot of continuous LED power throughout the day. Even a 2-3 day camping trip to shoot in the middle of Scotland’s nowhere shouldn’t be too much of a stretch for most uses if everything is fully charged before I leave. And, I can always plan ahead and buy a second Novoo.

Which is exactly what I do intend to do. I’ll be picking up one or two more of these things for when I do go away on those wilderness shoots for a few days at a time. Mostly for LED power, because that’s what’s really going to drain them.

« The first teaser video for Nikon mirrorless camera has been published
Fujifilm will launch 33mm f/1 autofocus lens, the first of its kind »