This is Benjamin “Von Wong” and I am a Montreal Based Photographer. Recently I just did a tour across Europe and one of the shots that I did that got selected as Editor’s Choice on 500px featured something quite new that I haven’t quite seen around and that’s blending Fire and Multiple Exposures. I’ve outlined the general storyline of how the whole shoot and project came about for those of you interested on my blog but figured I’d give you DIY’ers a little more technical breakdown for those of you who want to attempt to create your own Multiple Exposure shot! Before going into any explanations, be sure to see this video of how the entire photoshoot came together: 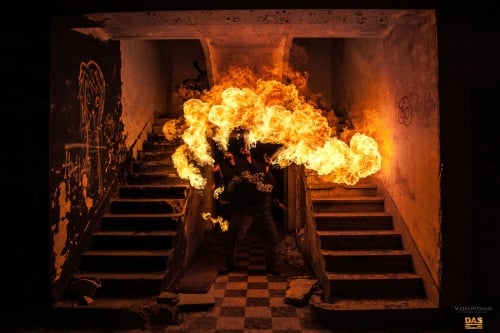 To begin with, you need a system that is capable of creating a Multiple Exposure in camera. Nikon guys have it good because anything above a D7000

actually has it (apparently the D90 does too!) whereas you Canon folks shorter of the 5Dmk3 don’t have this function built in! Although I have heard that other cameras such as the Fujifilm X-Pro 1

also has this awesome feature, I’ll only be covering how to do a Multiple Exposure in a Nikon system since that’s what I own!So let me begin…

A multiple exposure is…essentially images stacked one on top of another. In the old days, that meant simply shooting images on top of the same film before screwing that little knob to move off to the next film. In the digital age it means… you can’t do it unless you have a fancy dSLR!

Well, in a world dominated by photo-manipulated images, it’s quite fun to be able to turn around and tell somebody that scoffs off your work: Nope. This was done in camera. I can still see Udi’s face when I told him that these photos weren’t photoshopped. His expression suddenly changed and out of nowhere, the respect for the final results suddenly increased tenfold. [editors note: true story]

Beyond the simple “wow” factor, what’s really cool about creating Multiple Exposures is that you come out of the camera with a nifty RAW file. This means that your combined image, unlike a PSD file actually has quite a larger range of play.

On top of that, since your camera is actually combining two RAW pieces of data, the blends actually turn out quite a lot nicer than a standard “screen” blend in Photoshop. This means less transparencies and better colour tones. Don’t trust me? Try it yourself!

Alright! Enough talk, how do I do it?

Uh… wait aren’t you going to explain what happens next?

It’s pretty much self explanatory from here!

The short version of it is that Auto-Gain ON means the camera will try to match the exposure on all three images to output one uniformly lit image. This works out semi decently with images featuring a lighter background but completely screws up when playing around with a dark background.

For a more detailed explanation: Google will do a much better job of explaining it than me!

Anything else I should know?

You can actually CHANGE your camera settings in between multiple exposures. This gives you a whole bunch of creative options such as my shot over here of this Angel of Fire which combined long AND short exposure together. For anyone who’s ever played with fire, you’ll know that shooting fireballs requires an extremely short shutter-speed whereas capturing the movement of wing’s (which in my case happens to be long strands of Braided Kevlar Rope

set on fire) requires a longer one. 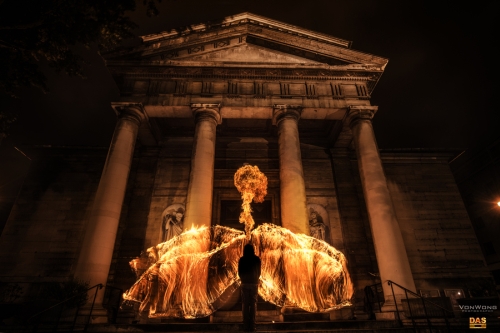 OMG that’s AMAZING! I didn’t know my camera could do that!

Great! Now head out there and experiment. It’s truly the best way to learn. I’ve simply showcased one way of doing it… I’m sure there are millions of more creative options!

For those of you who still have more questions, I’m actually going to be putting out a DVD with detailed camera settings and more for my series of photos. Click HERE to check it out!

How to match exposures on multiple photos in Lightroom