Okay let’s just start right off by saying this image is not just my baby. Anyone who has ever heard of the light painting extraordinaire Eric Paré would see this image and think, “Ummm Robert? You totally ripped off Eric’s work.” To which I would kindly respond, “Good job for knowing who Eric is and for being able to spot his work … because this is his work!” Well, it’s halfhis work anyway. You see, this new image is a collaboration Eric and I created together. If you aren’t one of those people who knew right away Paré must have been involved (or at least have heard of him/seen his masterpieces), then you need to drop everything and check him out!!! Eric is an extremely talented, passionate, and creative photographer who specializes in light painting. Rather than trying to delve too deep into an explanation of his process, I’ll just have you put your eyes on this brilliant video he recently released….

Pretty amazing, right!?! Before we go any further I want to take a second to thank the model Kim Henry for being the most elegant etherial human ever. She is a professional dancer and self-proclaimed “Delicate Warrior” (which I liked so much I decided use it for the title of the picture). I think it is such a poetic couple words, how she is gentle and graceful yet her poses are so strong and powerful. Kim and Eric are a creative team to be reckoned with, and collaborate all the time on these stunning light painting images all over the world. I hope to one day have the privilege to shoot with Kim myself.

Anywhoo, I’ve been talking back and forth with Eric for some time now and we eventually decided to do a collaboration. He sent me a bunch of really awesome images he shot with Kim and gave me free reign to go crazy with them from there. I wanted to come up with something that was still noticeably a work of Eric’s with some obvious “Robert Cornelius flare.” Even though Eric experiments with countless different shapes, colors, and movements of light in his works, one technique that he revisits time and time again (because it’s just beautiful and looks amazing every time) is a large circle of light behind his subject. So I decided to use the image he sent with this technique employed as my base shot for the edit. 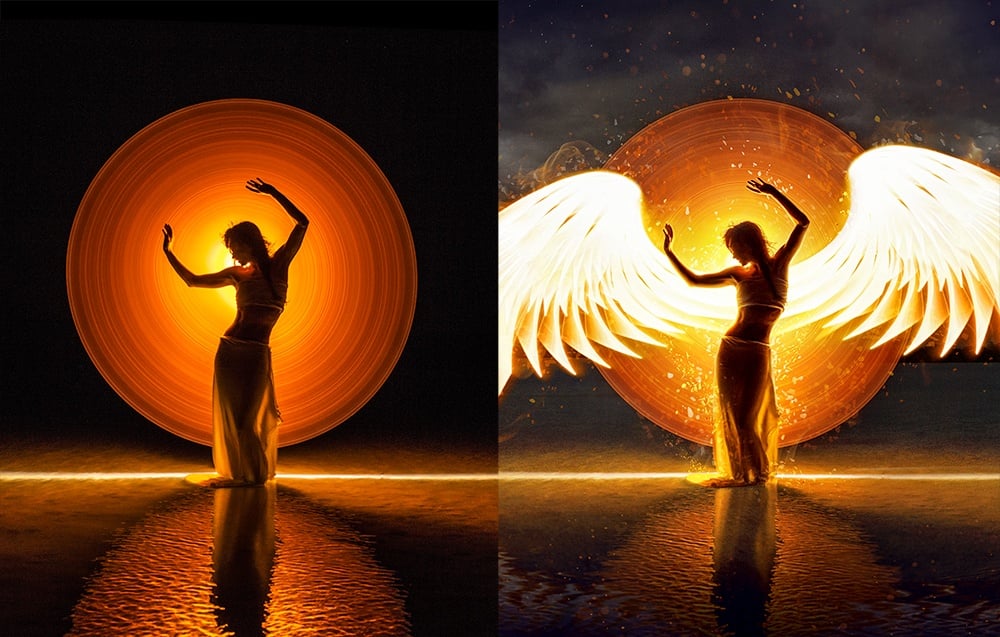 Like I said, I was hoping that the finished piece would still look like one of his works of art, but definitely wanted it to have a little something extra that would make people go, “Oh that’s different, Eric’s never had an image like this before!” I wanted to find that middle ground where our two styles could meld together … hence collaboration. So, what could I build into the picture to give it that extra something? In addition to sending me some gorgeous images of Kim with light painting behind her, he also sent several pictures that were just interesting trails of light by themselves. I was looking at some of the light trail images and thought how they kind of resembled feathers. Why not just revisit one of my favorite things to add to images: GIANT WINGS!From there I set off on a magical Photoshopping journey to create epic wings of light! 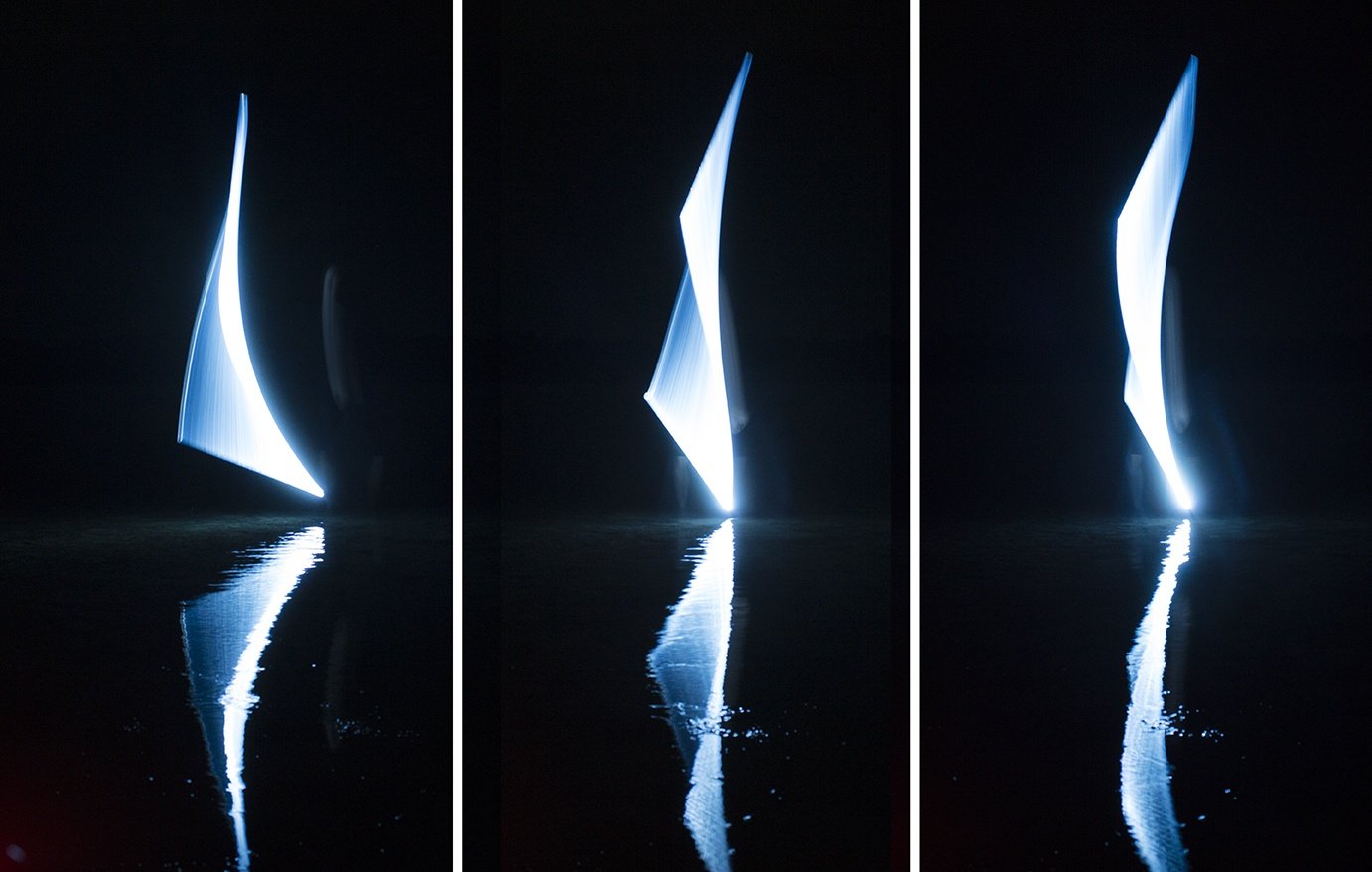 The first task to tackle when assembling something in Photoshop is to get whatever it is you’re using cut out onto its own layer. Because I was using these images of bright glowing light on a dark black background, this first step was stupid easy. Just by setting the layer to the “screen” blending mode (which will only let the lighter pixels show and make the dark pixels transparent), I was already basically there. Even though the backgrounds were very dark, there were still a few pixels light enough that you could faintly see the edges of the light painting image, and we don’t want that – so I threw a quick mask on and painted away the edges. I also obviously had to mask away the reflection in the water so I had just the light streaks by themselves. 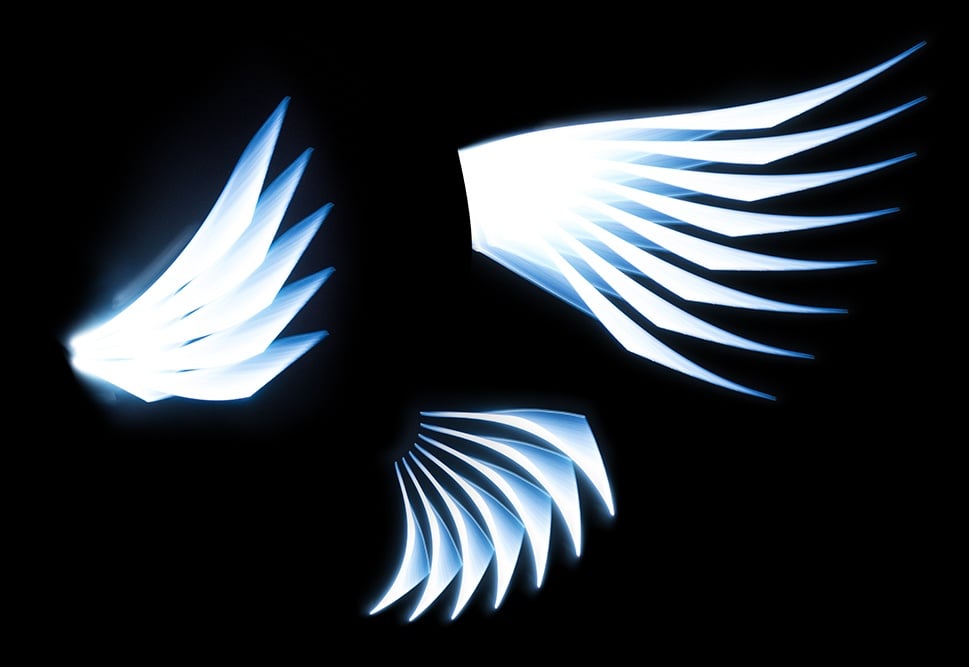 Next I started to build up the different pieces of the wings by assembling small chunks of feathers and then duplicating and merging the groups of them, essentially creating little “fans” of feathers to work with. Part way though building the wings I realized how very handy Photoshop’s “Transform Again” function was. What I would do is place the top feather in my “fan,” then duplicate that layer, scale it down slightly and rotate it a little bit. When you have the transform controls up (by hitting COMMAND + T), you can actually grab that little tiny crosshair in the center and move it to the point you want the layer to rotate from. 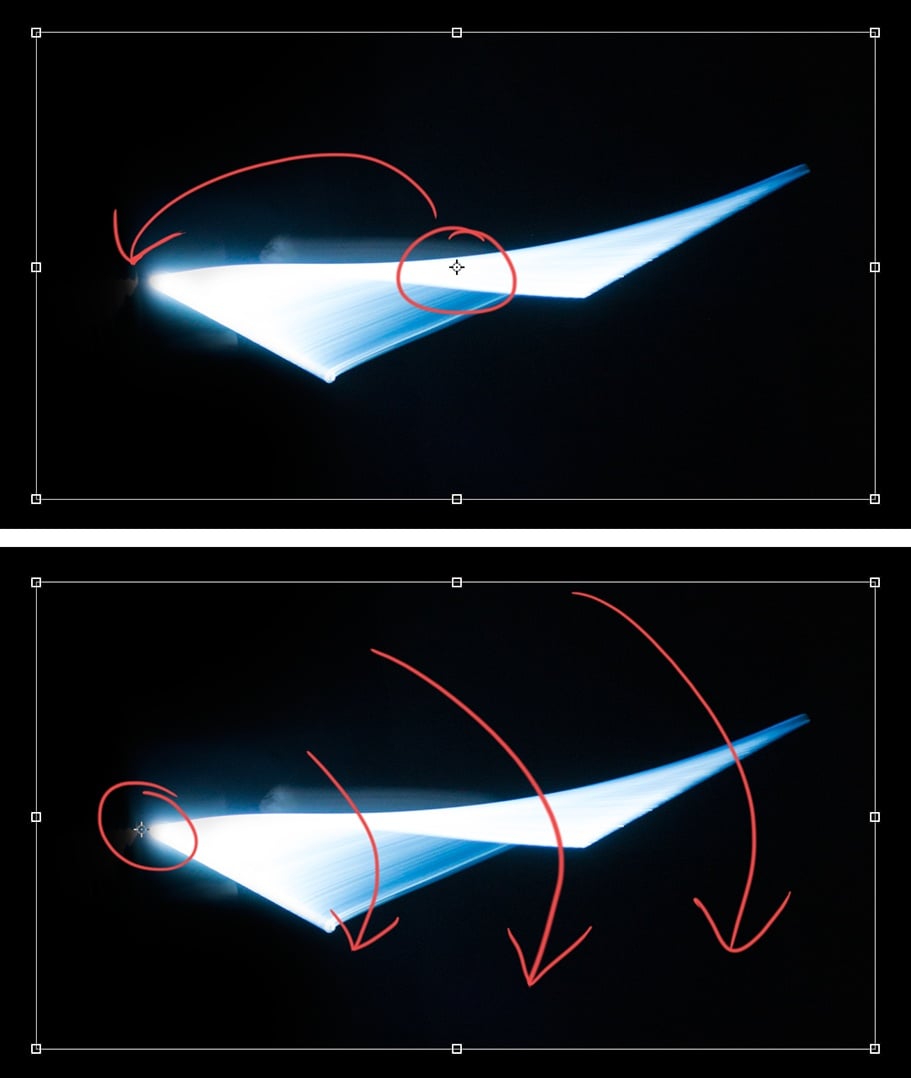 Meaning you can move that point to the inner-end of the feather so when you rotate it, it will spin around that spot. After you’ve made the transform once, Photoshop will remember exactly what you just did. So, now you can just hit COMMAND + J to duplicate that layer, then SHIFT + COMMAND + T to “Transform Again,” and it will move/rotate the next feather in your fan exactly the same way as the last. You can repeat these two quick commands as many times as you’d like and it will keep making a new feather and rotating it. I guess there is a limit though, because eventually you’ll have an entire circle of feathers. 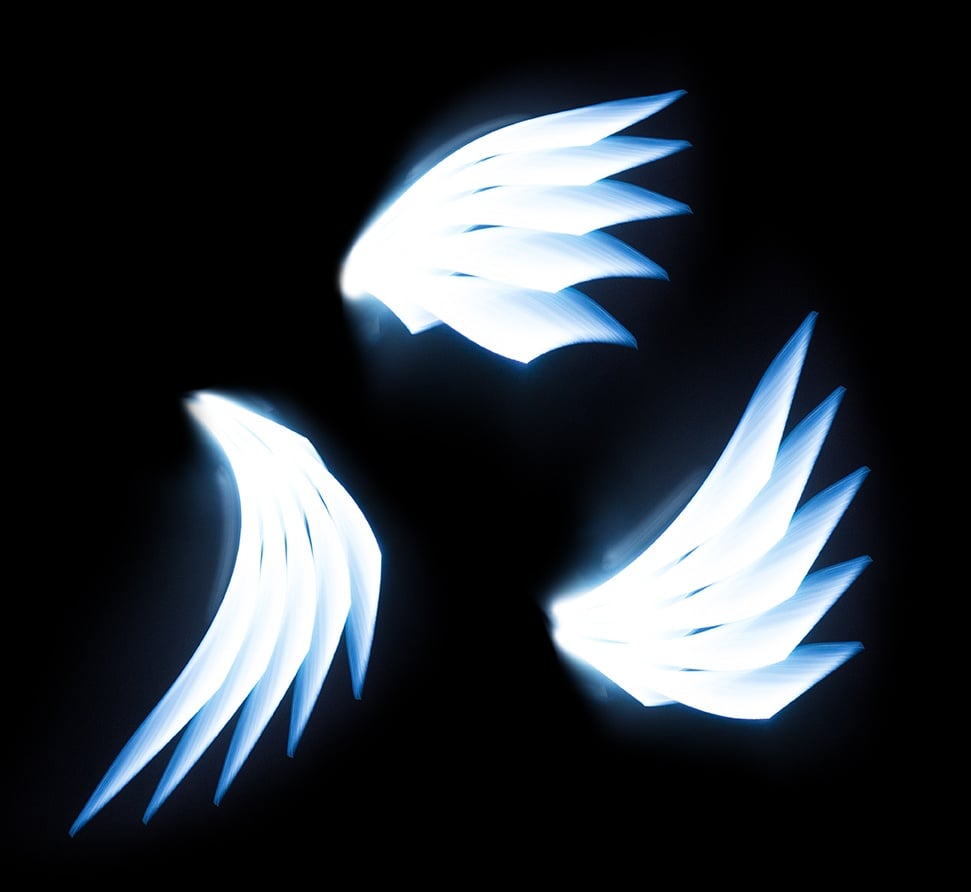 Once I had these little feather-fans created and merged onto their own layers, it was pretty easy to move them around and assemble the wings how I wanted them. Plus I was able to use the warp tool to push and pull the fans around to my liking rather than fussing with each individual feather. I even warped the entire wing once I had it all assembled. The above image is actually the same fan piece warped different ways that I used several times while making the wings. Note that many times throughout my process I would duplicate and merge what I had created so I always had my individual pieces and parts to refer back to if I needed them later. But was able to have my fans, and eventually the entire wings, on one solid layer for easier manipulation. 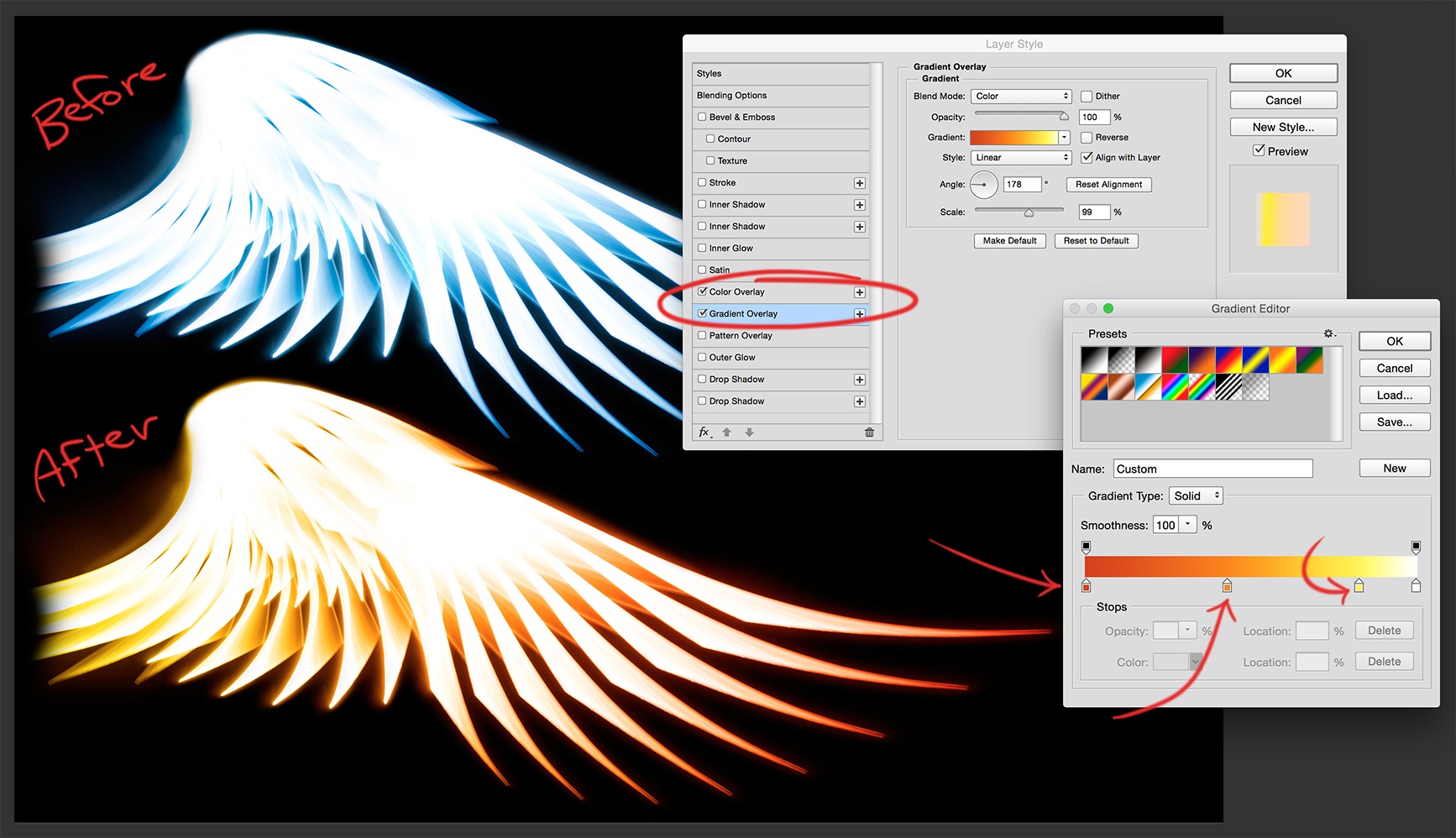 After I had my wings assembled I decided (as you may have noticed … unless you’re color blind … sorry Garry) that I wanted the wings to match the warm tones of the base image of Kim. I used some layer styles to quickly and easily change the wings to a more orange-y tone. You can access the layer styles by double clicking on a layer, or right clicking a layer and going to “Blending Options” at the top of the menu. I applied a Color Overlay layer, selected a red/orange hue, set the blending mode to “Soft Light,” then turned the opacity down to 50%. Next I added a Gradient Overlay (seen above). I set the layer blending mode to “Color,” then double-clicked on the gradient to bring up the Gradient Editor and made a gradient going from red to orange to yellow. You can add extra colors to your gradients in the Gradient Editor by clicking under the gradient box where you see the little colored squares (where the arrows are pointing in the above image). You’ll notice if you hover your mouse in this area that the cursor turns into a little white hand. This is a good sign that you’re in the right place. 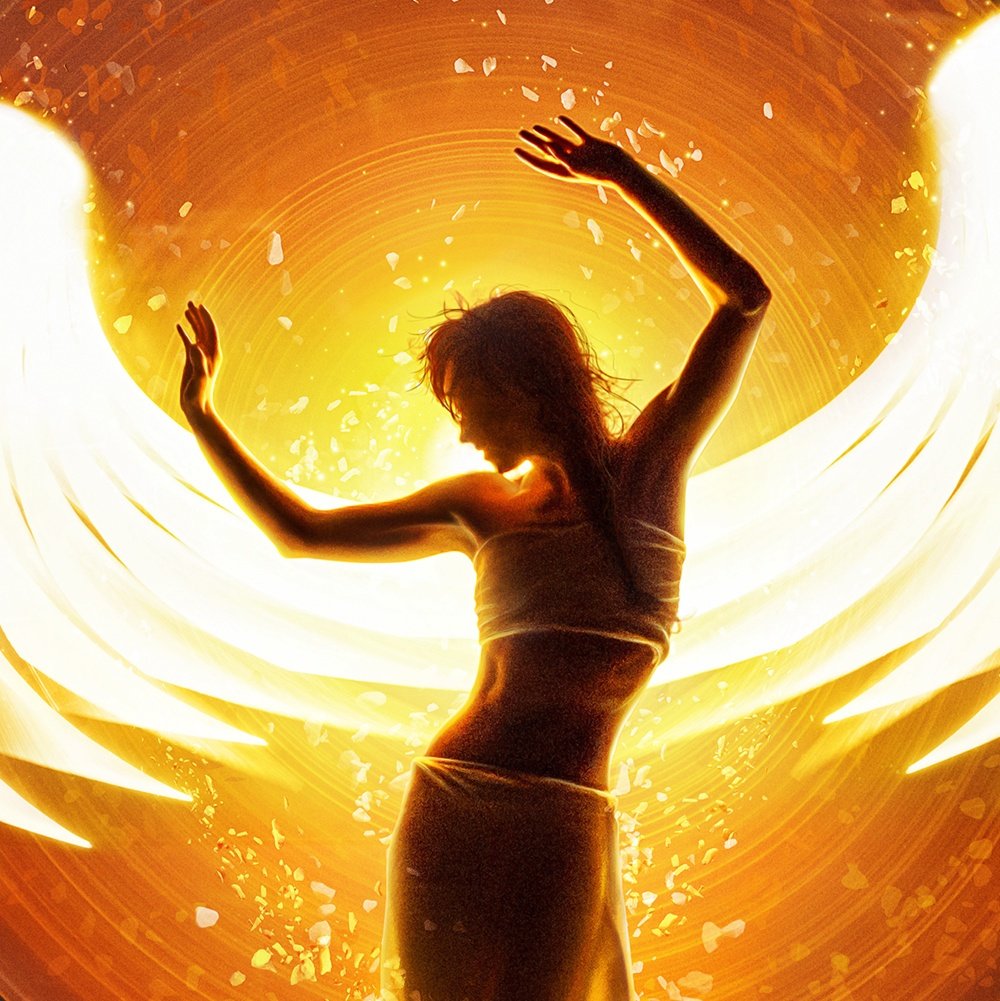 After I had my finished glorious (now warm) wings added onto Kim, it was time for my favorite part … PARTICLES AND CRAP!HOORAY! A lot of the random shaped flecks of … stuff … were actually created using images of rocks and pebbles from this set. Perhaps not what you’d expect rocks to be used for, but these tiny falling pebbles shot on a black background made for excellent little flying particles. I also added some fire to the wings, and just for good measure, lots of little speckle-y embers from this fire and sparks set. Just like I did for the wings, I simply set the various layer to the “Screen” blending mode to make the black disappear.

I also decided that the sky should be a bit more dynamic, so I added some storm clouds I shot at the beach last year. (That storm has come in handy many a time, let me tell you!) Of course as I always do, I exercised a fair amount of digital painting as well – I shaded and highlighted specific areas to bring out all the little ripples and details in the fabric. I also wanted to be sure to pay attention to how light would be falling on her if she did in fact have giant glowing wings, so I paid particular attention to her edges and added bright white in certain areas of the very edges. I also added in some extra wispy hairs, because … why not?

Lastly I made sure to have the wings reflecting in the water. These are the sort of details that can often go forgotten, but really add such a great layer of realism to a very unreal subject matter. By reflecting the wings and attempting to match the way the actual reflection looked helped to sell to the viewer that the wings were actually in the picture. I used a plugin called “Flood” by the company Flaming Pear to make the reflections. I even ended up overlaying the texture from the real reflection to give the fake wing reflections the same look and feel.

Well that about sums it up. I obviously did a zillion more things in my edit than I described here. This would be quite a lengthy (well lengthy-ER) post if I were to type out every little step that went into creating this image. If you’d like a slightly more in-depth look at all that went into it, feel free to take a gander at the speed edit video of my process below! And I’d just like to thank Eric one more time for being such a genuinely nice guy. It’s been really fun chatting with you online and I can’t wait to one day get to create side by side with you rather than through the internet. It was such a fun process to get to play around with your images and put my own spin on them.