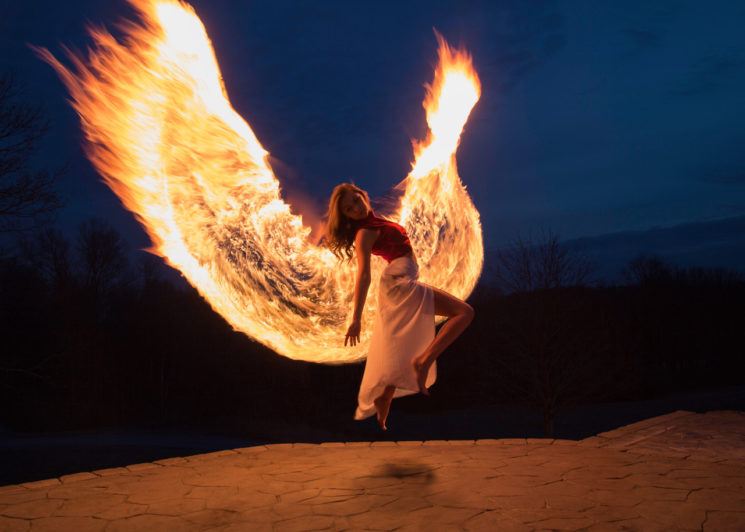 Light painting is something many of us try at some point in our photographic journey. Some of us just make a brief visit into this world, but others make it their home. One such photographer is Derek VanAlthuis, an avid light painter who’s produced some outstanding work. One such image is the one above.

When I first saw this image, I could immediately tell that it wasn’t your average light painting photo.  The fire just looked so real. As it turns out, it looks that way because it is real fire. I got in touch with Derek to find out more about his process, and get some insight into how this image was made.

Like many of us, Derek was introduced to light painting with steel wool photography. He experimented with it with some friends while in film school. From there, he began to question what other forms of light painting might be possible.

I wanted to pursue the technique even more. Upon further exploration, I happened to stumble upon Eric Paré’s Instagram page and was absolutely amazed at what he was creating.

I immediately became obsessed with light painting and wanted to learn everything I could. Due to his incredibly friendly personality and valuable mentorship, Eric inspired me to be the light painter I am today.

Having the help of a such an experienced mentor is certainly a valuable asset for any photographer in any genre.

I am insanely passionate about creativity and inspiration, which is probably why I am drawn to light painting. You use the darkness as a canvas to form and shape light into whatever you can think of. It provides an infinite amount of possibilities to be creative and unique.

And that creativity and uniqueness doesn’t just extend to the images themselves. Light painting by its very nature opens up the doors of inventiveness. Many things can act as a light source for such activity. Whether it’s led lights, a flashlight with or without various attachments, a tablet screen, or an illuminated stick.

It’s that inventiveness that led to the Phoenix. Derek told DIYP about the idea that inspired the creation of the shot.

The symbolism behind a Phoenix has always been inspirational for me. “When the Phoenix perceives its death, it ignites itself into a magnificent fire. Then it re-emerges from its own ashes – reborn, ready to continue life once again.” I wanted to see if I could portray this concept in my work. 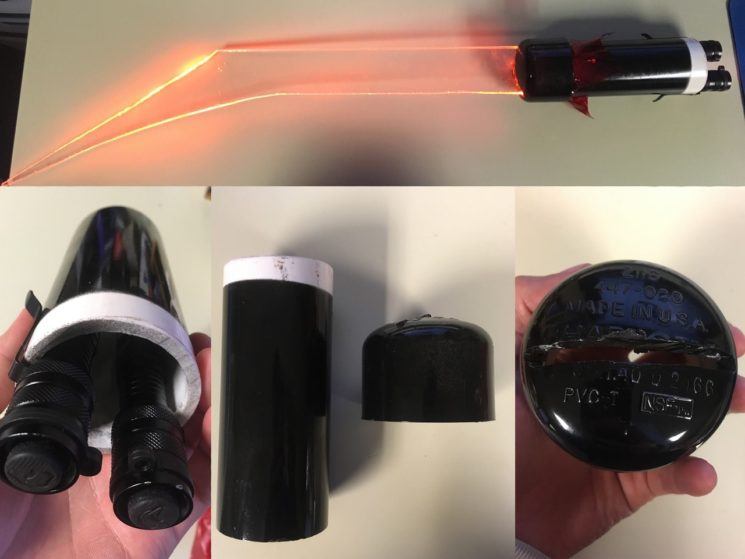 I knew that my model was going to be one of the most important parts of this idea. No question that Faith Leuzarder was the perfect choice to capture the essence of a Phoenix. We started by experimenting how to approach creating the wings. I created my own custom plexi-glass light painting tool to help us shape and create the wings behind her. 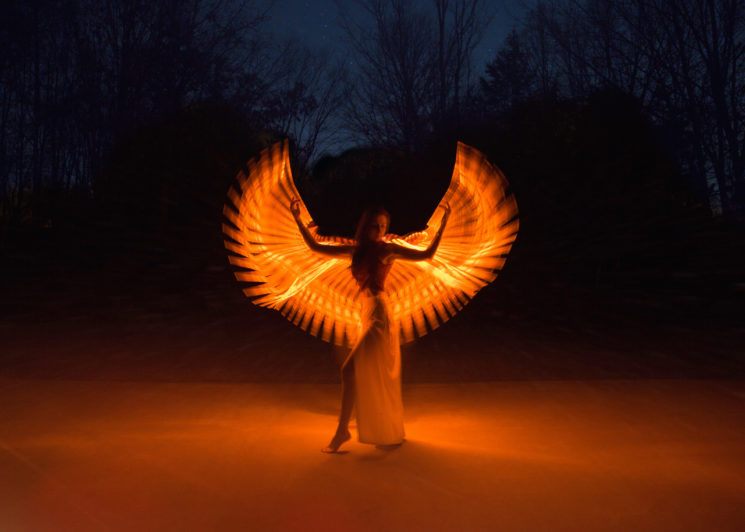 We really loved how it came out, but I knew that we could push the Phoenix idea further. Luckily, I came across the incredible work of my friends Zach Smidt and Juli Thornton, two fellow light painters in our light painting community.

Zach used actual fire to form rings behind Juli to create an amazing aesthetic, and I was immediately inspired to try his technique out with our Phoenix wings. By combining my techniques with Eric & Zach’s, my vision for this photo was brought to life.

Using real fire certainly adds that extra touch of authenticity to a subject like the phoenix. Derek spoke with us about the equipment he used to create the image. He also shared his method for creating the fire that allowed him to get such a degree of control.

I used a Canon 5D Mark III with a Canon EF 24-105mm f/4L IS USM Lens for this shoot. The exposure time was about 3 seconds long. I normally shoot light paintings around f/2.8- f/5, but I shot this photo at f/9 in order to capture more detail in the fire. Obviously, fire is really bright so this prevents the flames from being overexposed and blown out.

It is really important to shoot on a tripod when light painting. Since you are using a long exposure, any movement in the camera during that time can show up in your shot and cause it to be blurry.

Oh yeah, tripods are pretty much essential for long exposures, especially light painting. The last thing you need is blurry environments detracting from your main subject.

The tool used was based on Zach’s fire technique, which involves wrapping and stapling a 100% cotton t-shirt around a wooden dowel. The shirt is then soaked in BBQ fluid and then lit. I used this technique on my own wing-shaped tool to get the effect and look that I wanted. 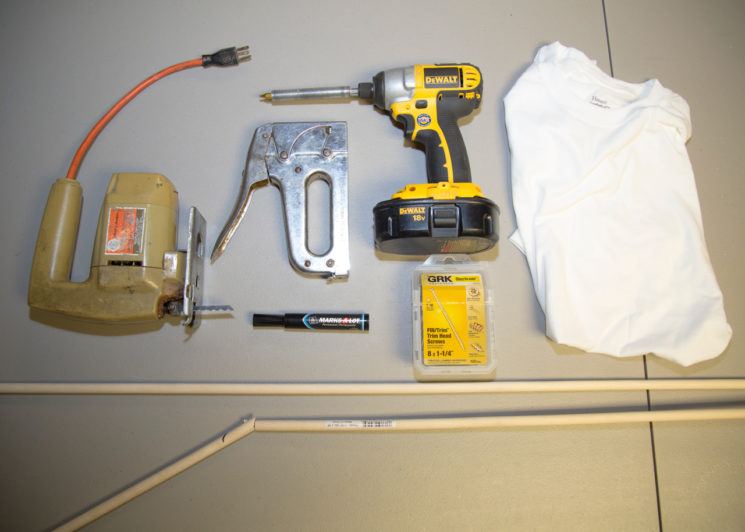 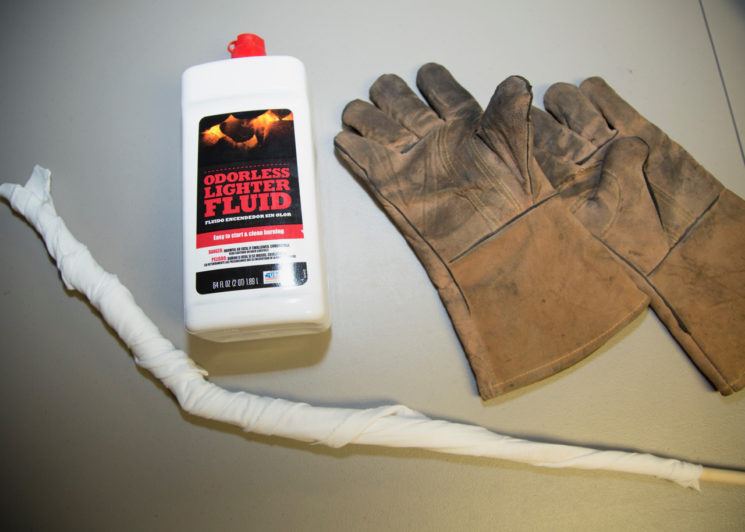 Of course, when working with fire, there are some definite safety aspects to take into account.

It is important that your shirt is 100% cotton, any kind of blended fabrics can melt and cause burns. If you attempt this, PLEASE take all the proper precautions and be safe. I recommend wearing flame resistant gloves and shooting at a place with plenty of water nearby

The shot was illuminated only by the fire in Derek’s hand over about  a 3 second exposure. His subject, however, appears to be flying. Obviously she can’t leap and hold a pose in mid-air for that long, so we asked Derek how he achieved this.

Once we had all of our gear set up and ready to go, we had to set up the composition. In order to give Faith the illusion of her “flying” I had her pose on a small step stool. I also took separate shots of just the background and then separate shots of her feet. This allowed me to remove the step stool in Photoshop and create the “flying” pose. 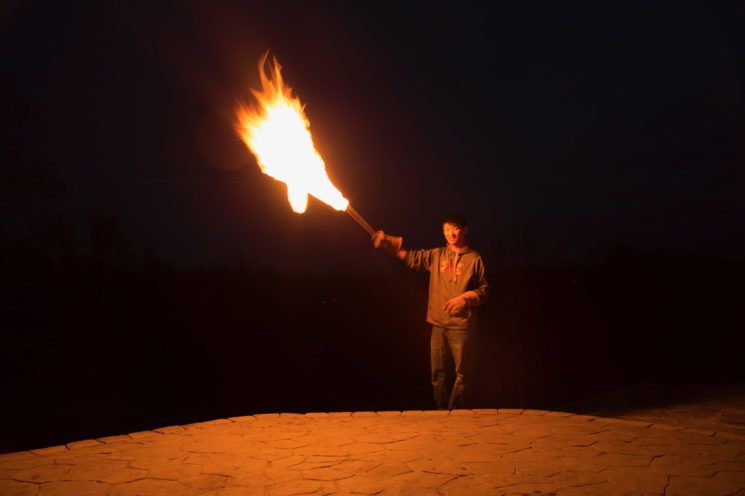 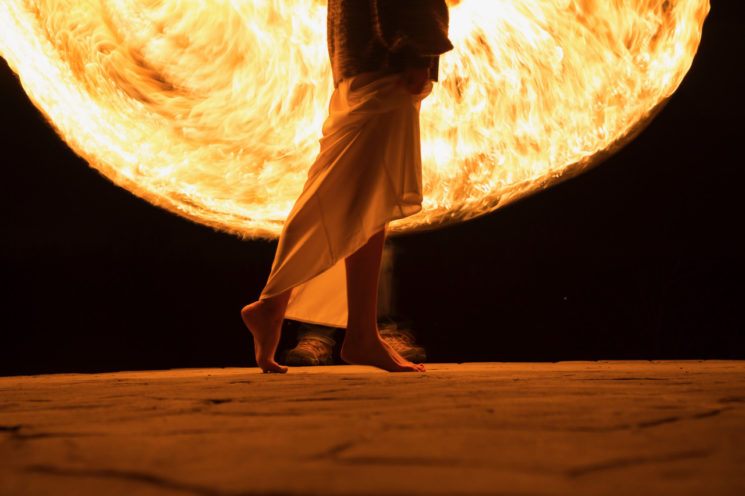 To make the wings during the exposure, I created a wing shape by moving the tool from right to left. It is important to pay attention to how the light is being cast on your model as well so that they are nicely lit in your final image.

Despite working with nice warm fire, two important aspects of shooting images like this on location are temperature and timing. You want to to be late enough in the day that your light sticks out from your scene over a long exposure. But, you don’t want it so late that it’s freezing cold. Derek spoke with us about these challenges on a shoot like this.

One of the biggest challenges when light painting with a model is that they need to stay perfectly still during the exposure. If they move even a little, it will show up in your image and they will look blurred. Luckily, I have worked with Faith many times and she specializes in yoga so she is used to holding poses for a short period of time. 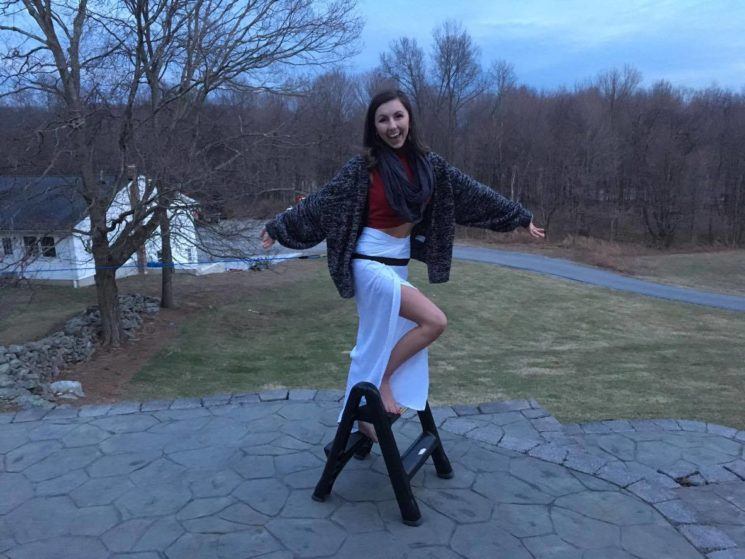 A quick behind the scenes shot of Faith

It is also super important to make sure your model stays as warm as possible! Since you are shooting at night, the temperatures can get cold. If your model is cold, they could start shivering and move during your shot, which is not ideal. I recommend bringing blankets or a sleeping bag for your model to use during down time. To me, my model is priority and it’s important to keep them comfortable.

One of my favorite times to shoot is at blue hour because of the blue color tones (obviously) and because it provides a nice background and depth to your composition instead of just pure black. The only challenge to shooting a blue hour is that it is a very short time period, about 15-20 minutes. So it’s important to make sure you plan ahead and get as many shots as possible within that time frame.

With the shots in the bag, and back at his computer, it was time for Derek to start post processing the photographs. Derek knew before he’d even shot the first image that this would be a composite. So, he told DIYP about his post workflow.

For this shot, I brought my favorite shot of the Phoenix wings into Photoshop, including the shot of the background, and the extra shots of my model’s feet for layer work. Using different layering techniques, masks, clone stamping, and blending modes, I removed the step ladder and replaced it with the background. Then I composited her feet back into the image in order to create the illusion of her “flying” above the ground. 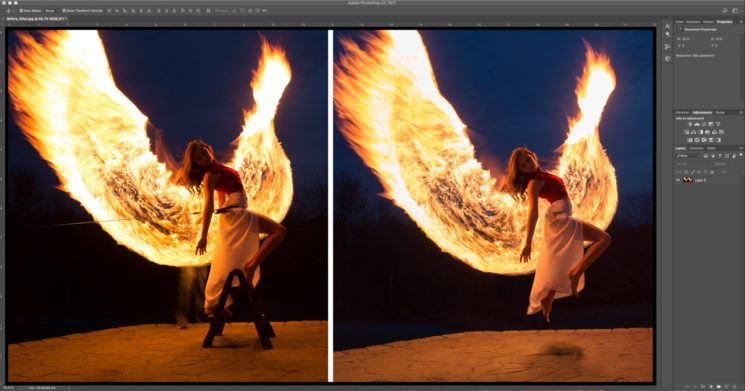 Next, I applied a Camera Raw Filter to the image to make basic adjustments to the exposure, contrast, temperature, highlights and the whites/blacks. Then, I played around with color adjustments and made sure the colors weren’t oversaturated. I also experimented with the color tones. This photo had really strong blue and orange tones so I wanted to make adjustments that complimented each other well.

Whenever I make an edit, there is that one moment where you know its exactly how you want the final image to look. So once I saw that point, I exported it and the result is what you see here!

For anyone interested in light painting, I encourage you to give it a try! What I love most about light painting is the community. There are people who are ready and willing to help you learn and grow in this art form – to help push your creativity further and create amazing images.

After having a brief look through some of the online light painting communities, they are indeed very supportive places. Everybody seems all too willing to lend a hand and help perfect techniques where possible. With that in mind, Derek has a few people he wanted to thank for helping and inspiring him on his journey. He considers his work to be a team effort, and each of them have contributed in their own special way.

I would personally like to thank Eric Paré, Kim Henry, Zach Smidt, and Juli Thornton for being such an inspiration to me. 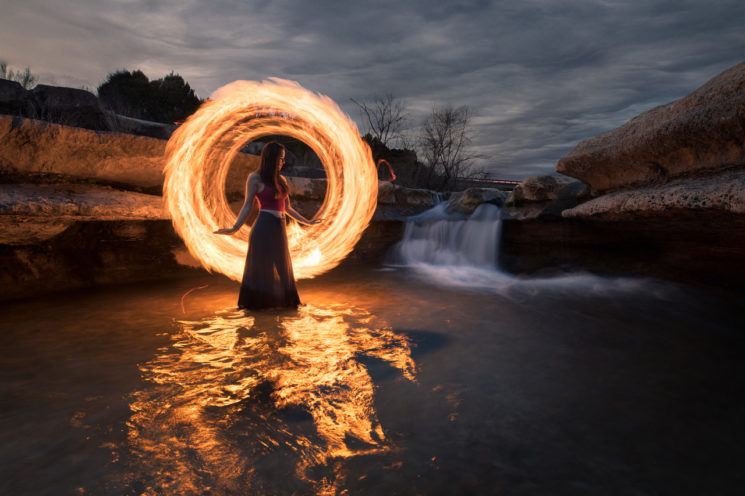 To Faith Leuzarder, for being such an amazing model and person to work with. And to Michael Scalise, Dennis Ulland, and Tim Holt, for always helping me out with all the work behind the scenes. This vision of mine couldn’t have become a reality without all of you. Thank you for fueling my passion to create and inspire.

Also, a huge thank you to all of YOU for supporting my work and my passion.

And many thanks to you, Derek, for taking the time to share your work and talk with us. A fantastic idea, with an amazing final result.