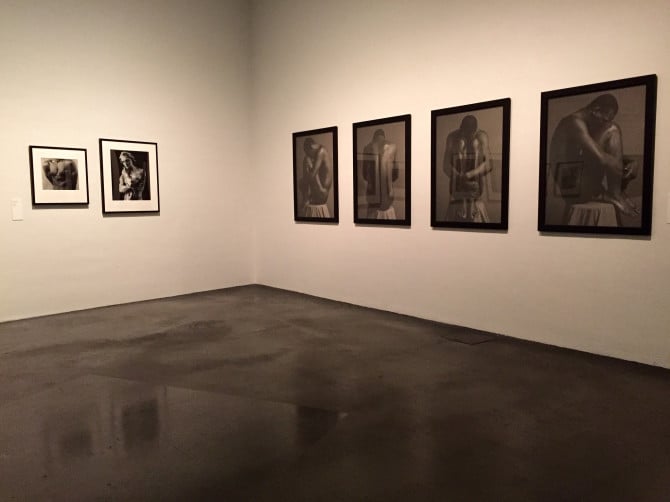 The notorious photograph, Man In A Polyester Suit, taken in 1980 by photographer Robert Mapplethorpe, sold at a Sotheby’s (New York) auction on Wednesday for $478,000. The sale makes the photograph one of the most expenisve photos ever sold, though it’s still quite a ways off from list topper, Rhein II which sold for a whopping $4.3M.

As some of you may recall, Man In A Polyester Suit–a NSFW photo which shows a man wearing a three piece suit with his penis out has had a troubled history. In 1989, Cincinnati’s Contemporary Arts Center put the image on exhibition, which resulted in public outrage and criminal obscenity charges against the Center’s director. He was acquitted in 1990.

In 1992 the image was sold for $9,900, and largely fell out of the public spotlight. That is until this week, when the photograph made it’s way to Sotheby’s.  The selling price of the photograph exceeded auction officials estimations of an amount between $250,000 and $350,000. The print sold on Wednesday was part of a 15-print edition, and the sale marks the first time in 23 years that a photo from this edition was offered for sale.

Man In A Polyester Suit is scheduled to make a public appearance in 2016 at The Los Angeles County Muesum of Art and the J Paul Getty Museum, as part of a retrospective on the photographer and his work.

If you’re unfamiliar with the photo, a quick Google search can remedy that. While it is most definitely is NSFW, I personally don’t feel as though it’s as graphic as all it’s controversy makes it seem. That being said, the 1980’s was a different time. It will be interesting to see the how differently the public reacts to next years retrospective.

« Sunset Selfie Series Shows How One Man Gets Creative With Cardboard Cutouts
Here Is A Clever System For Labeling Your Lens Caps, Body Caps And Rear Lens Caps »