Bitbanger Labs, makers of the popular Pixelstick light painting tool are at it again. This time it’s a module LED strip which bears more than a striking resemblance to the Spekular lighting system released just last month. But, it has a few rather significant differences. Foremost amongst them being multiple colour options, as well as remote control straight from your phone.

The project is being launched through Kickstarter, and it’s already over halfway towards its goal. It’s an interesting concept, for sure. While it seems aimed more toward effects lighting than realistic lighting, it’s an interesting system. For simulating effects like firelight or red alerts on a submarine, it could be just the ticket.

It’s set to ship out in March 2018, so you’re going to be waiting a while if you decide to back the project. But if the success of the Pixelstick is anything to go by, it’ll probably be worth the wait.

The Colorspike is controlled either via an interface on the back of the light or through your phone. An app allows you to create your own custom colour presets, that you can store directly into the light itself. This means you don’t have to control it with your phone once you’ve set it up. You can just dial up any of the preset patterns using the controls on the rear of the unit.

The hue, pattern and speed of transitions can all be controlled from within the app. And you can layer mutliple colours on top of each other, too, acting independently of each other. The app also lets you control multiple lights from your phone simultaneously, too, which is a rather handy feature.

The guys at Bitbanger Labs say that the light is aimed at both stills and video shooters. Personally, though, I’m not entirely sure I’d use it for regular production work. The big drawback of multi-colour LEDs is that they typically have a somewhat low CRI. This means they’re not putting out light that allows colours to resemble their real world values. Particularly to a camera.

This isn’t much of a problem for effects lighting, like, say, the flashing lights of a police car. But it is important for any kind of critical work, especially if you’re trying to balance lights with a daylight ambient glow coming through the window. The last thing you want to do after editing something like an interview is to have to go in and colour correct each and every shot because certain colours didn’t render very well. 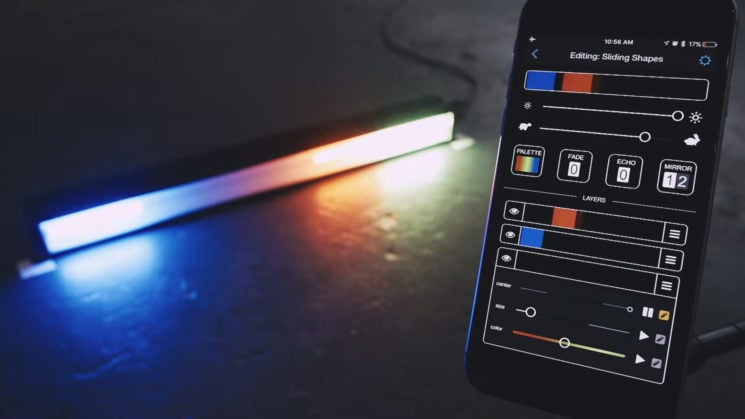 For more creative types of shoot where colour accuracy isn’t all that important, they do look rather good, though. Especially if you’re regularly switching out colours, or want some refined control of just how much of the bar is lit.

Each light is 40cm long and measures 48x48mm on the end. They’re made from anodized aluminium, nylon and ABS plastic. With each light you get the Colorspike, a DC power adapter and a padded carry case.

Bringing a massive niche product like this to market is expensive. This is why Duncan and Steve, the duo behind Bitbanger have again taken to Kickstarter for this project. The early bird deals have already gone, but you can back the project and get your own Colorspike for $299. A pair is $565, or for $1,100 you can get four. Backers should expect to receive their lights in late March, 2018.

« Google Pixel 2 scores 98 on DxO, sets the new record
Google Clips puts AI inside a camera to pick the best moments to take a snap »