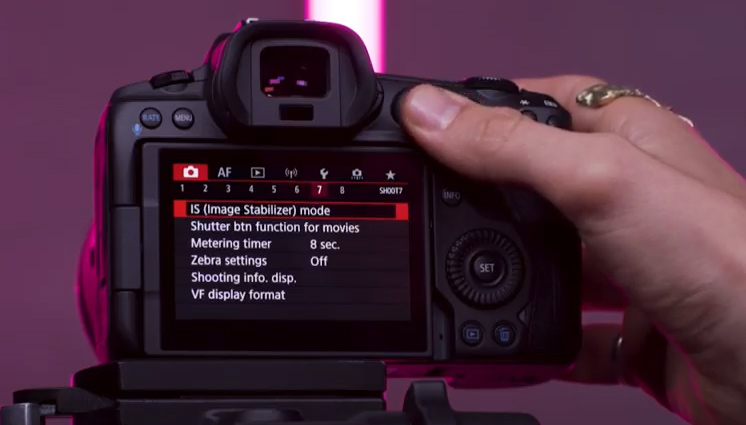 A video accidentally posted to YouTube by SunStudiosAustralia, who seemingly have managed to get their hands on the new Canon EOS R5, has revealed a few more details about the upcoming camera. The video was spotted by the folks at Canon Watch before being quickly taken down – although not before screenshots were made.

The screenshots show that the EOS R5 will feature zebra stripes, an almost essential tool for filmmakers that’s becoming more popular with photographers, too. It will also feature “View Assist”, allowing you to shoot flat LOG footage but preview graded footage. And apparently it can “process 8K video into higher-quality 4K video (up to 120fps)” – which would be a neat trick.

The screenshots from the original video seem to raise more questions than they answer. As it thumbs through some of the menu options, there isn’t much confirmation on how some of the features work or clarification on what they might imply. Although the original video has been taken down, it has since been reposted to YouTube. Some sections have been removed, however, and some of the wording has been altered.

The idea of processing 8K into 4K came early on in Canon’s announcement of the EOS R5. It was sort-of mentioned on the Canon UK product page before the latest round of official updates a few days ago. But most of us assumed it meant in editing software like DaVinci Resolve or Premiere Pro. Now, though, the screenshot seems to suggest that the camera is capable of this internally. And at up to 120 frames per second?

Whether this means the camera will be capable of actually converting your 8K files to new 4K files internally in the camera or it just means that even 4K 120fps video will utilise the entire 8K resolution of the sensor without pixel-binning before scaling down and saving out the file is unclear. I guess only time will tell.

As far as other video features, one screenshot shows that the Canon EOS R5 will have zebra stripes to assist with exposure. Zebra stripes allow you to easily see overexposed parts of your image while you’re shooting through either the EVF or the LCD on the back of the camera, letting you quickly make adjustments. For filmmakers it allows them to more easily match shot exposure and for photographers, it easily helps us to prevent overexposing our scene without relying on our subjective view of the screen’s brightness.

Canon News also talks about a “View Assist” feature which allows you to change what the EVF/LCD output looks like while recording flat LOG video files. Essentially, it means you don’t have to just watch the flat view on your camera’s LCD or viewfinder and can get an idea of how it will look after grading – even though the actual footage is flat. This is similar to how external monitors work using LUT files. Whether or not the EOS R5 will actually support LUT files or you just have to pick from a set of internal processing options is unknown.

The stabilisation shown in the video is a little confusing. Canon has repeatedly said that it offers 5-axis IBIS, which one would take to mean that the sensor itself physically moves to help compensate for things like camera shake. But it also seems that the EOS R5 also has “Digital IS”, too. Does this mean that regular IBIS is only available for stills? Does it have 3-way stabilisation that includes lens OIS, sensor IBIS and electronic image stabilisation?

Canon seems to be primarily focused on the video aspects of the camera, which isn’t too surprising, really, when most companies had the stills features figured out years ago.

While Canon has not confirmed it, it does appear that the EOS R5 will indeed feature around a 45-megapixel sensor. If the 8K video is utilising the entire width of the sensor and not throwing anything away, then the sensor contains as many pixels horizontally as 8K video does. 8K video is 7,680 x 4,320 pixels – only around 33-megapixels. But DSLRs and mirrorless cameras shoot a 3:2 aspect ratio, not 16:9. When we extrapolate up to a 3:2 resolution with a sensor that’s 7,680 pixels wide, that means it’s about 5,760 pixels tall. 7,680 multiplied by 5,760 is 44,236,800 pixels – a little over 44-megapixels.

Hopefully, it won’t be too much longer before Canon spill the beans on the complete spec.