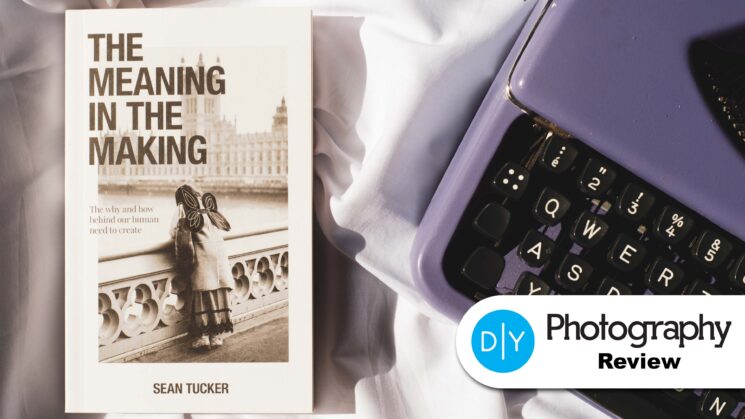 In a recent interview with DIYP, Sean Tucker presented you his new book The Meaning in the Making. We talked about the book and various challenges, secrets, and anecdotes about writing it. Naturally, I read the book before the interview, and it was one of the best things I did for myself lately. So, I figured – it’s time to write my first book review that isn’t a bunch of scribbles on Goodreads. Sean shared his thoughts as the author, and I also wanted to share mine as a reader, hoping to show you another look at it.

The Meaning in the Making is Sean’s second book and the first one published by Rocky Nook. It’s paperback, but there’s also an audiobook and an eBook available, and Sean hopes to publish a limited edition of hardback so there will definitely be something for everyone.

It has 319 pages and it’s divided into 14 chapters. Some of the chapters have a QR code at the end that you can scan with your phone and they will take you to photos and videos that add to the article. The book ends with a clever wrap-up that I’ll tell you more about later. Now that you know what you get when you buy it, let’s go to my favorite part: what you get when you read it.

As you may have concluded from the interview, The Meaning in the Making is not your average photography book. Nothing wrong with those, of course, but Sean’s book is more about the whys of creating than the hows. That’s what draw me to it in the first place, and following Sean on YouTube, that’s pretty much what I expected. It’s worth noting that you’ll recognize some of the topics that Sean has already covered in his YouTube videos. However, they are expanded in the book, and there are many new topics that he never covered in his videos.

Speaking of the videos, the book covers similar topics. It’s filled with facts about psychology and human nature and how they relate to creating. There are many stories and anecdotes from Sean’s personal life as examples, too. While some of them are heartbreaking, I never felt uncomfortable or thought that the author was oversharing.

The book was written in a tone that radiates pure honesty that’s always there with a clear purpose. While reading the book, you can almost hear Sean talking directly to you. He encourages you and helps you on your creative journey. But sometimes, he gives you the truth that’s harsh, but essential for you to hear. Like that favorite teacher of yours who always maintains strict discipline, but who is wise, profound, and has a heart of gold.

As a non-native English speaker, I think it’s also important to mention the language of the book. For me, it was ideal: not overly complex, but still eloquent and well-composed. Sean is an eloquent and educated individual and it shows in his writing style. And yet, it was easy for me to follow, understand, and visualize the stories he told in The Meaning in the Making.

You can probably tell by now that I liked this book. And when I like what I read, I usually can’t stop reading while I finish the entire book. I’m a fast reader, so I can easily finish a 400-word novel in a day. However, it was different with this one. It actually took me around two months to complete it! The thing is – you will need some time after each chapter. Each of them has its importance and its weight and it requires you to stop and think for a while before you go to the next one. Some sentences will punch you in the face but, you know, in a good way. They’ll turn your way of thinking and doing upside down, and you’ll definitely need some time thinking time after reading those. Ideally, treat yourself to a retreat and spend some time thinking. For me, it was this snippet:

“We don’t ‘feel’ our way into in-spiration, we ‘work’ our way in. […] In-spiration doesn’t strike as a feeling while you’re sitting on a couch waiting for it. In-spiration most often strikes when you’ve already gotten yourself up and begun to create. On the hardest days, ‘making’ has to begin with a rational choice.”

Sean wraps up the book nicely with the chapter titled Benediction. It’s a legacy from his days as a pastor, and it’s a rather beautiful way to say goodbye to his listeners and readers. Through a series of beautifully written “well wishes” or even “blessings,” Sean wishes well to his fellow makers while at the same time briefly resuming what you’ve previously read in the book.

Even though I generally read fast when I enjoy the book, I’m really glad I savored The Meaning in the Making. In my opinion, it’s a book that anyone can benefit from, whether they’re a creator or not. After all, all humans have the potential to create, so this book might help them become conscious of it.

Personally, I loved this book both as a highly creative person and as someone who’s deeply interested in psychology and human nature in general. It has given me valuable insights into some psychological theories, into the nature of creating, and even made me reevaluate and adapt some of my own beliefs and behaviors. It’s one of those books that you definitely need in your collection because you’ll want to read it many times. And I believe that each time you’ll be moved by something else – which is what adds value to it.

If you’d like to order a copy, you can do so via Sean’s website or Amazon. As I mentioned, there’s a paperback version, an eBook, and an audiobook to choose from, and the prices range between $15 and $20, or you can get a printed and electronic version as a bundle for $30. Don’t forget to follow Sean’s work on his website and Instagram, and make sure to subscribe to his YouTube channel.

The Meaning in the Making: An interview with photographer and author Sean Tucker