Usually I write about stuff that has to do with DIY, or Photography. If it is a good day, I’ll write something that is both DIY and photography. But being the guy that I am, sometimes I want to share stuff that does not answer the strict definitions of either. So, if you are only interested in building stuff from junk around the house or learning the ins and outs of photography, feel free to skip this post. If you’ll read through, you will learn how to be cool on Flickr. 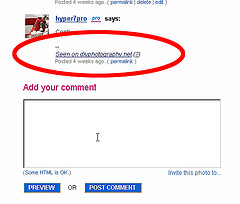 Browsing on Flickr, I often see a small trailer at the end of a comment "seen on this and that site" or "seen in your photo stream". Now, this is a very cool feature, because it helps the person who uploaded the image to know how you got to see it. This is a lot of fun for the photographer. Like the comment written here for an image featured in the Painting With Light article. (Click on the image to see the actual Flickr comment)

At first I was really amazed. I thought "Wow those posting comments persons are really nice to invest all this effort in helping the photographer know where they came from" then I noticed a small question mark at the end of the comment which was the key for understanding how this trick can be done with no effort at all.

The trick is a little nifty script that goes on top of the Grease Monkey. The Grease Monkey is a firefox extension that allows you to customize the way you look at pages. You can add scripts that will do almost anything to almost everything in the big WWW. (They also have the cool monkey logo that you see on the top left there). You can read more about it on the Grease Monkey Wiki.

Once you have the monkey, you need to get the add referrer into comments script. Restart the browser, and there you have it. From now on, each time that you will view a Flickr image, the place that brought you to this image will magically appear at the end of your comment. All you have to do now is write the comment and hit preview or post. (There is also an internet explorer version on the same page. I didn’t check it. Firefox rules!!!)