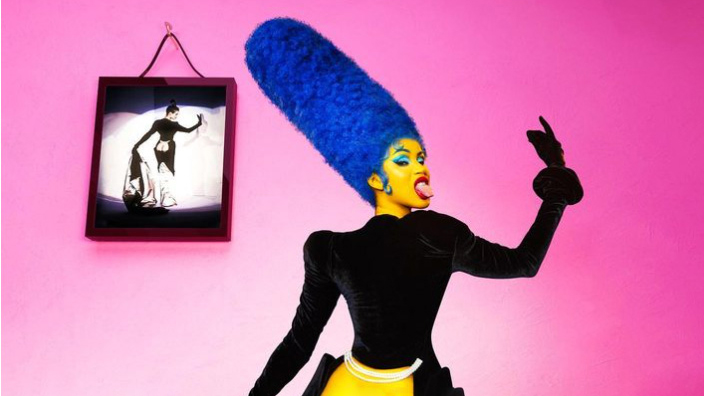 Rapper Cardi B recently got herself in legal trouble that broke the internet. On Halloween, she published photos of herself dressed like Marge Simpson in an iconic Thierry Mugler dress.  But as it turned out, the photo was inspired by work from another artist. And no, it’s not (just) Matt Groening.

The artist is now filing a lawsuit against both Cardi B and her photographer, and the whole case has reached the level of ridiculousness when it just becomes amazing.

Photographer Jora Frantzis is the one behind Cardi B’s photos, as well as the costume in them, inspired by the 1995 Thierry Mugler dress. By the way, the rapper didn’t bother to credit the photographer in the Instagram post she published – but that’s not what we’re talking about today.

Both Cardi B and Jora Frantzis posted the same series of photos showing the “Cardi B Marge,” a photo of the dress that inspired the costume, and an illustration of Marge Simpson wearing that same dress. Frantzis at least credited everyone involved in the shoot… Everyone but the person from whom she drew inspiration. By “drew inspiration” I mean copied the concept completely.

That person is an artist and activist, aleXsandro Palombo. The photo Frantzis took of Cardi B looks incredibly like his illustration of Marge Simpson from 2013. The dress, the pose, the color scheme, the photo of the dress on the wall – everything is exactly the same.

Palombo’s illustration is a part of the “Marge Simpson Style Icon” series, made with the intention of “transforming Marge in a style icon; a work of reflection on women’s emancipation and gender equality through the most iconic moments of the last 100 years in fashion costume.”

“We wrote to Mrs Cardi B and collaborators how come that they never contacted us for authorisation to use the artwork and didn’t [mention] or credit the artist, violating Meta policy about [intellectual] property rights,” Palombo wrote in a statement on Instagram on 1 November, adding that he hadn’t heard back.

“Cardi B and her collaborators have used my artwork without any authorization, debasing its original meaning and only to amplify their image with a clear commercial purpose that has nothing to do with that path of social awareness that has always characterized my works.

(Extra)ordinary people are welcome to use my artworks images for personal and non-commercial purposes.

To everyone else: STOP STEALING TO ARTISTS.”

Palombo’s lawyer, Claudio Volpi of Barberi & Volpi, said in a statement that the artist is taking legal action against the rapper and her “closest collaborators” for unauthorized use of the artwork.

“Cardi B has illegitimately appropriated the work of aleXsandro Palombo for mere business purposes in defiance of the most elementary rules on copyright and Instagram policies, with the consequent serious risks, both of compensation and of discredit for her public image,” Volpi said in a statement sent to Newsweek.

So, to recap: in 2013, aleXsandro Palombo was inspired by Thierry Mugler dress from 1995 and illustrated Marge Simpson wearing it. Then Jora Frantzis was inspired by his illustration and created a photo set based on it. Then Cardi B posted her photos and credited no one (which is an issue on its own). I literally had to draw a diagram to figure out who stole from whom.

This whole charade reminded me of the time when photographer Jeff Sedlik sued tattoo artist Kat von D for using his photo of Miles Davis for a tattoo. Although this is a bit different, I think. If I’m not mistaken, Frantzis’s photo is what we call derivative work. If that’s the case, she should have asked Palombo for authorization to take the photo based entirely on his illustration, which she didn’t do. Maybe she believes that “good artists borrow, great artists steal”… Although, that’s hardly the case if you are already an established artist working with superstars.

I only wonder what Matt Groening would say to all this.

Photographer sues Miley Cyrus for sharing his photo without permission