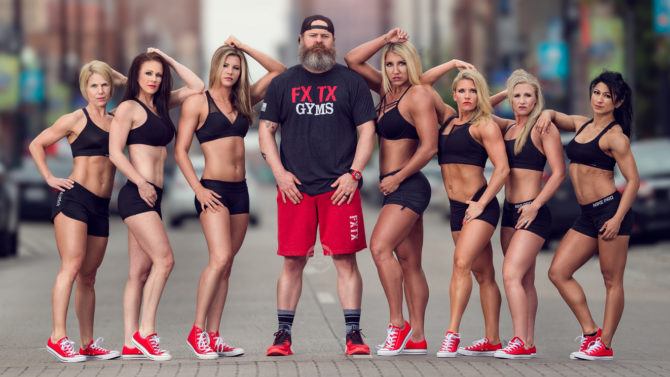 I’ve been following the work of Texas based portrait photographer Keydrin Franklin for a while now, but a recent Facebook Live stream of this particular shoot got me very interested.  It’s certainly not every day you see a group of people walking out into the middle of the road to have photos made.

As well as resulting in fantastic photographs, Keydrin’s live stream for this session illustrates the kind of effort and care required on a location shoot in unpredictable surroundings while ensuring the safety of all those involved.

After the stream was over, DIYP got in touch with Keydrin to find out more about about him, how he got started in photography, and to get some insight into what went into the creation and execution of this shoot.

About five years ago, my wife, Kara, and I took our first cruise vacation.  At that point, we only had a little point and shoot camera but we were expecting to get some pretty good shots.

I had spoken with another passenger on the cruise ship about the Nikon D5100 he was using.  He offered insight and I was impressed with his photos.

Once we got back home and started looking at our images on the laptop, we were disappointed to find that most of them were either blurry or too dark.

On September 24, 2011, my wife and I marched into Best Buy and purchased my first DSLR camera, the Nikon D3100.  It is from the date of purchase that 924 Photography came to be.

Keydrin quickly learned some valuable lessons, which helped him to refine his photography and figure out what it was he really enjoyed shooting.

Like most new photographers, I began shooting any and everything I could… in AUTO.

I soon realized that this would not yield the results I wanted.  Almost obsessively, I began reading literature about photography, watching YouTube videos from established photographers, and talking with a few co-workers that were experienced with shooting in manual mode.

I dabble in all genres of photography including landscape, animals, HDR, and motorcycle.  I also enjoyed macro for a while, followed by night photography and light painting. Although these were fun, my true passion came to be portrait photography.

I am proud to say that I am a completely self-taught photographer.  I am constantly seeking out new information to further my knowledge of photography. 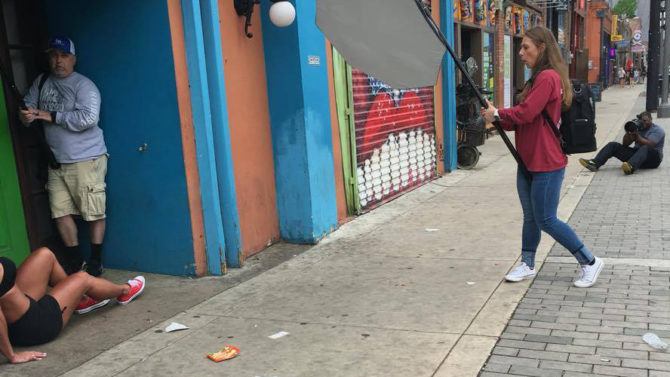 Whether one has been shooting for five years or fifty, the big thing that all the best photographers have in common is that they’re continually learning more about photography.  Each shoot gives us new experiences, chances to experiment and teaches us something new.  It’s this constant learning process that keeps us motivated to push ourselves to keep creating new work.

It was this drive and passion that inspired the session highlighted in this post.

My wife and I are great friends with one of the personal trainers and group fitness instructors at the gym we go to. She is also an NPC figure competitor and trains at CrossFit FXTX in Allen, TX. I was asked to shoot their competition team in October 2015, but we were limited to shooting inside the gym at that time.

Fast forward to March 2016, and only a few weeks out from a competition, the team wanted to have updated photos done.  I decided that I wanted a more urban look to these photos in comparison to the mundane gym shots from the previous shoot.

I had also been itching to do a shoot on the beautiful graffiti walls in the Deep Ellum area of Dallas, TX.  The girls loved the idea and the rest is history.

Fortunately for us, that history was live streamed and preserved for the rest of us via Facebook.

Going live is always my idea!  I have utilized the live stream feature on Facebook since making its debut.  I feel that it gives fans and other photographers the opportunity to engage with me on a more personal level and get to know my family a little better.

For new and seasoned photographers alike, it also gives them a chance to see what goes on behind the scenes and how I set up my equipment.  Before this particular shoot, I gave a 24 hour notice via Facebook that we would be live and invited everyone to tune in.

I also ensured that each client was comfortable being shown on live video.

You can see from the videos that Keydrin had several people with him to help with this production.  Keydrin told DIYP a little about them, and their function on the shoot.

I had my wife, Kara, and good friend Sammy Ashkar with 2K Studio Photography, assist me on this shoot.  Their main job was assisting with lighting but they also acted as spotters to ensure the safety of everyone.

Kara also double checks to make sure hair is in place, clothing is adjusted properly, and that the pose looks natural and relaxed.  She is a stickler for details!

Natalia Renteria, one of the CrossFit FXTX NPC bikini competitors, also directed much of the posing. 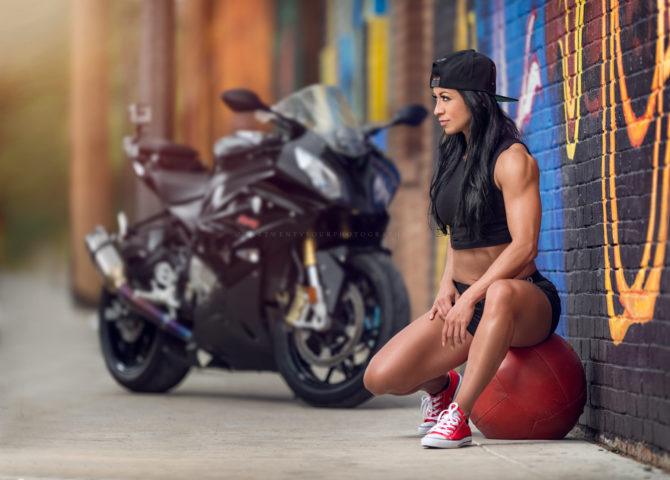 Obviously, shooting in the middle of the road can be risky and challenging.  We asked Keydrin how he dealt with these challenges.

Shooting on an active road is risky and quite tricky.  I was also using a long, telephoto lens that required me to be further away from the clients.

To prepare for the street shot, I first had the clients practice the pose on an empty sidewalk.  They lined up and we discussed spacing and hand and foot placement.  Once we were confident that they could replicate the pose, we moved to the street.  In addition to Kara and Sammy acting as spotters, CrossFit FXTX coach, Dylan Gautreaux, was an additional look out. 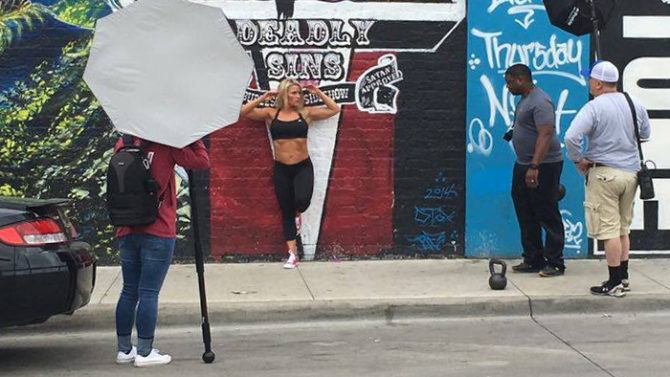 We were shooting at about 11:15am, so traffic was not extremely heavy.  For the most part, drivers were patient and considerate.  Our method was simple though – get in, get out, repeat until desired shot is produced.

Advice – don’t be the person that holds up traffic for an extended period of time.  If traffic is steady and you’re having trouble finding a window of opportunity to get in the street, move to a less populated street. Never compromise anyone’s safety (or your own) for an image.

Safety is one thing that can never be stressed enough on a shoot of this nature.  The unexpected can happen on any shoot, but when the dangers are obvious you need to use some common sense, plan ahead and take everything into account that you can in order to minimise those risks. 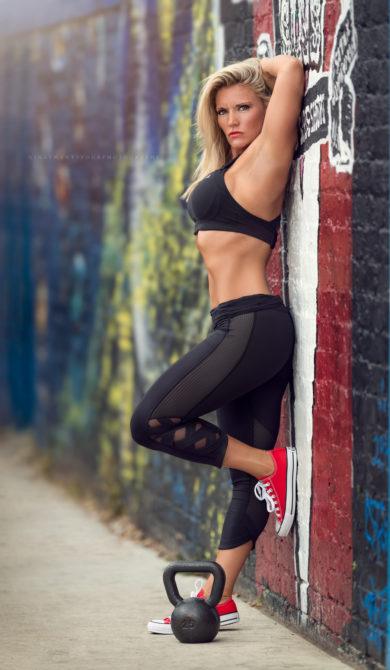 One of challenges of shooting models in bikinis, however, is the attention it brings.  Many bystanders and even other photographers on their own shoots would interrupt to ask if they could get their picture taken with the girls. 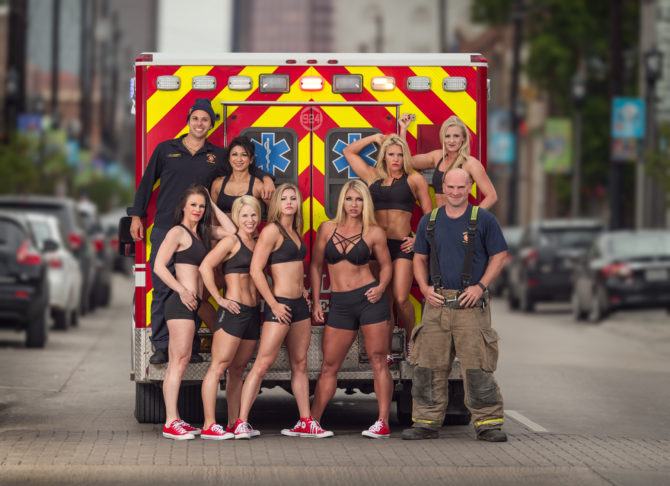 Additionally, a Dallas Fire Department ambulance stopped in the road to pose with the girls.  This did work in our favor though, as they turned on their lights to briefly stop traffic!

FYI – This street shot took at least 7 tries to be perfected (or close to it). 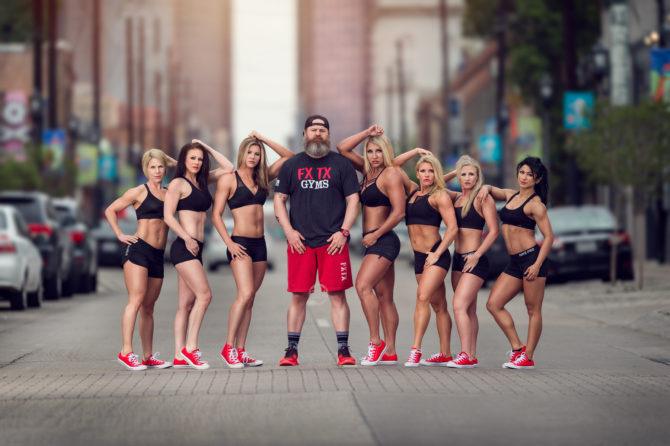 While introduced to some of it in the videos above, Keydrin told us about the equipment he used on this shoot.

I would like to preface this by saying that although I have high end gear, similar shots can be achieved using speedlites and a telephoto lens.  Many times I see comments such as “this is supposed to be DIY photography.  Not everyone can afford the gear he’s using.”

Remember, it’s not about the owning the most expensive equipment, it’s about the operator and their knowledge.

This image illustrates just how far you sometimes have to be from your subject in order to get that unique look with a very long lens on a full length shot. 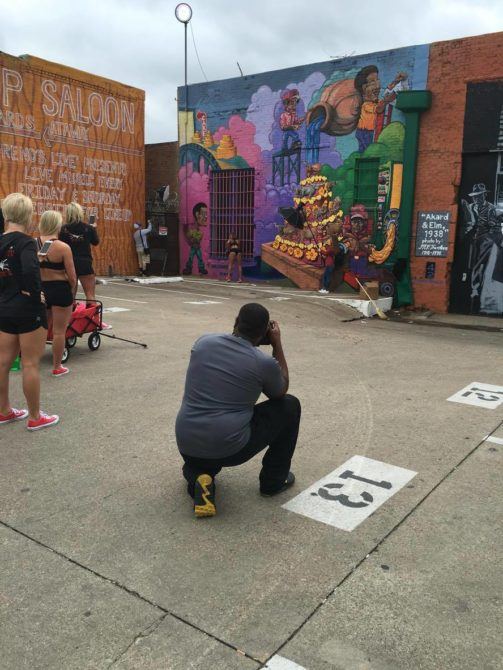 When it comes to post workflow, Keydrin likes to keep it efficient.  When working in environments with many visual factors beyond our control, some cleanup is inevitable, but when retouching the subjects themselves, subtlety is the key.

After importing the images into Lightroom CC, I began my search for the best group shots.  Once I narrowed it down, I had my wife provide a second set of eyes.  I truly value her opinion on these things!

In Lightroom, I do basic edits including adjusting the exposure, temp, and toning with the HSL tab.  I then export to Photoshop to complete the edits.

My Photoshop workflow began with cleaning up the scene, followed by removal of any visible blemishes on the clients.  I used frequency separation to feather the hard shadows and achieve the soft look that I love so much.  To add depth to the clients, I dodge and burn.  Next, I color tone through the utilization of color balance and selective coloring.  These settings vary by image, so I experiment with the shadows and highlights in color balance . I almost exclusively go very subtle. 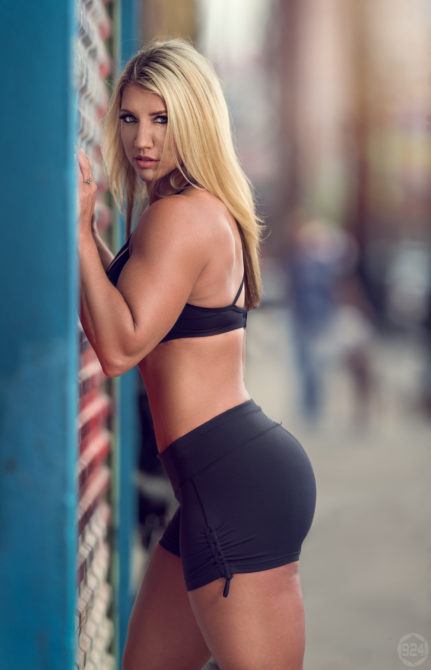 Keydrin offered DIYP his final thoughts on this shoot, and spoke a little more about some of the challenges.

The most obvious challenge was getting seven people to do the exact same thing at the same time!  Just when you think the shot has been nailed, you notice one person’s leg is straight when it should be bent or that someone wasn’t looking at the camera.

Oftentimes, this can be a person’s first time having professional photos done.  This can be extremely uncomfortable, especially for women.  One client in particular was very tense, so it took some time to get her to relax a bit.

Side note – I bring a portable jambox (speaker) and play music during my sessions.  This fills the sometimes awkward silence and seems to loosen the clients up.  It makes the shoots really fun.

Overall, I had an amazing time shooting this group and the outcome (beautiful images and satisfied clients) far outweighs any of the challenges that were encountered. 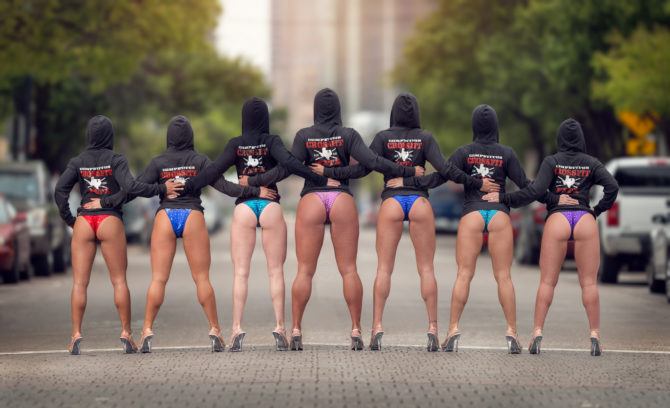 With the shoot now behind them, we wish the ladies the best of luck with their upcoming competitions, and we would like to extend a big thank you to Keydrin for being so generous with his time and sharing his story with us.

On Being a Female Street Photographer

« The ABC of photography ‘types’
Humor: A Letter of Complaint from Her Majesty, The Queen »