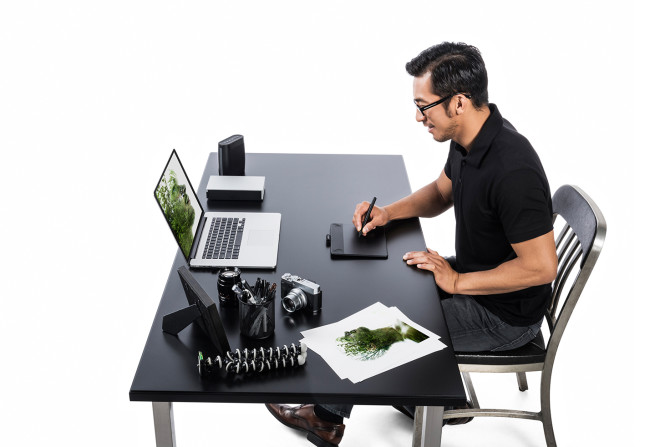 If you’ve been thinking about picking up a graphics tablet to help you get your post production workflow on lock, you may want to check out the latest addition to the Wacom family. The popular graphics tablet manufacturer has added new Pen & Touch tablets, which will come in four different “models”–the Pen & Touch Intuos Art, the Intuos Comic, the Intuos Photo, and the Intuos Draw.

The reason for the quotes is there is no real difference between the Art, Comic, and Photo models, except for the software which comes bundled with the hardware.  The Intuos Draw differs in that it only works using the pen and offers no touch functionality.

The software which comes with the Photo model is Corel AfterShot Pro, which probably won’t replace Lightroom and/or Photoshop for most of you. (Maybe you could gift your license to a friend who is just starting out?) But, the reason to buy a graphics tablet certainly isn’t for the free software that comes bundled with it, it’s how much time it can save you during editing. If you’re already a graphics tablet user, you know exactly what I’m talking about (and how hard it is to go back to editing without it once you’ve gotten the hang of using one.)

As far as the Intuos Photo goes, it’s a relatively simple design, but one that has enough features to be useful to most photographers. It has four programmable ExpressKeys, plus two more customizable buttons on the pen. The small model features a 6.0 x 3.7 inch active area, whereas the medium offers an 8.5 x 5.3 inch active area. Both have 1024 pressure levels and ships in three different colors (blue, black, white). The tablet will set you back $99 for the small and $199 for the medium. (I use a medium sized tablet, but it takes up a lot more desk real estate, and to be completely honest, I think a small tablet would be perfectly adequate for my needs.)