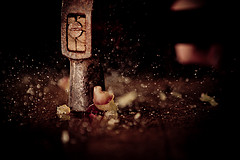 Ok, I’ll be the first to admit, Lego makes some awesome stuff, and I spent countless hours as a kid, Playing with those bricks. My favorite birthday gift for my 8th birthday was the legendary 497 Galaxy Explorer system. With passage of time Lego systems became more complex and involve electronics, special plastics and even programmable pats. Complex to the point where you can turn a Lego Mindstorm NXT set to a device for taking high speed images. This is by no means a cheap solution (unless you already have all the parts), it is a fun project for the engineeringly capable. So photographer and strip light master Silver Paul did just that – converted a Mindstorm set to high speed photography trigger..

The following is not a full tutorial, here is the obligatory disclaimer from Paul: This is in no way a guide or how to, it’s a documentation of my observations of what I did. Enjoy, try it for yourself, but on your own head be it! I take no responsibility for you being idiot enough to follow some random geezers instructions on t’interweb!

What? A system for freezing action automatically. The minimum flash duration used here is in the 10,000ths of a second range. Ideal for freezing all sorts of fun things….

My ultimate goal is to photograph bats in flight. With the gear that I have available to me….

Sooo, I have a Lego Mindstorms NXT, some radio triggers and a bunch of flash guns. The NXT will trigger a flash from a variety of sensors, the light sensor being the one I’m using here.

These are the first steps to this goal, the start of a remote trigger system. Fortunately it’s also useful for highspeed photographs too :)

By sensing the interruption of a beam of light the Lego computer will trigger the flash via radio. This is done in the dark with the camera shutter open for the duration of the action.

I have to assume you can use or understand Lego Mindstorms systems at least a tiny bit!

The major mod, if it can be called that, is to the cable joining the NXT to the radio trigger.

It’s ridiculously simple. You need to cut a mindstorm cable and put an appropriate connector on the end. Of the six wires in a mindstorm cable, I need to connect the ground-RED and the BLACK, forward motor power wire, to a jack plug that fits the radio trigger. (Wiring info source: brickengineer link )

WARNING: these cables can put out 9v at a power level enough to drive a motor. Trigger circuitry may not like that! There also appears to be a residual current that can cause constant triggering issues if the power setting is too high.

NOTE: Two of the wires are for feedback from the motor, without this info, the program can hang if it is asked to run the ‘motor’ for distance rather than time. 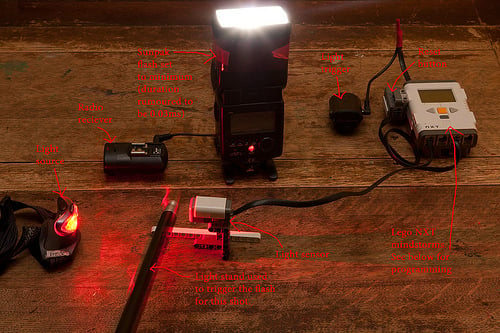 On to the program, I’ve stuck with the NXT system because I haven’t experimented with other languages that the NXT will support. I suspect they may offer better timing responses and I’ll be thrilled to see how it’s done! 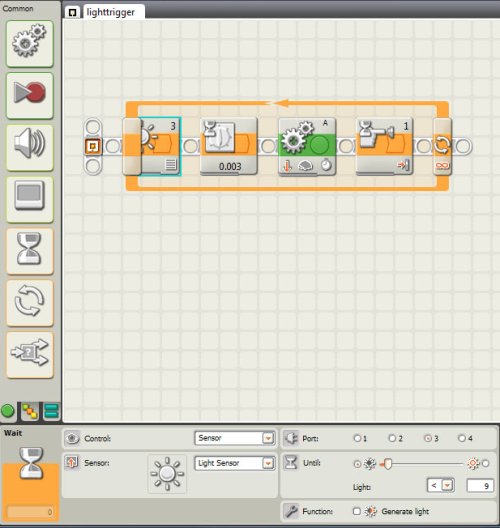 on the ‘wait for light’ unit, uncheck ‘generate light’ and set it to <10, this number will depend on the ambient light and how much it drops when interrupted. Experimentation is required. 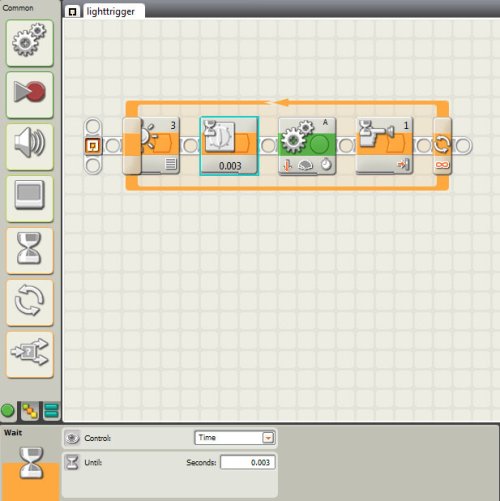 This is the delay unit for fine tuning your timing. This is set for the Lego splash drops I have done. 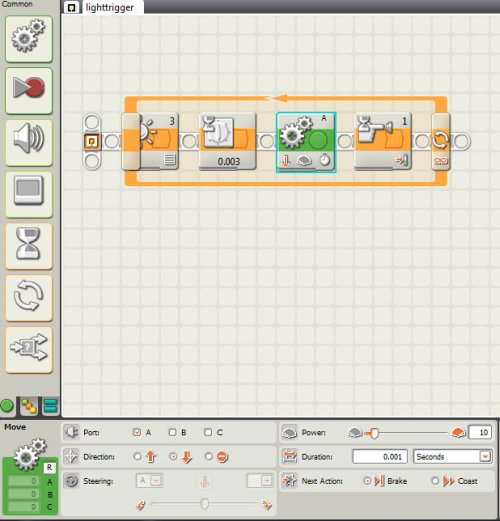 The trigger action: this is a signal sent to what would normally be a motor, but is here a radio trigger. I got the wrong wires(red and white), so mine says reverse! the power is set really low so as not to fry the trigger and the duration is short and, most importantly, in seconds. Without the distance feedback from the motor, the program will hang if, instead, we asked it to go a certain distance or rotation. 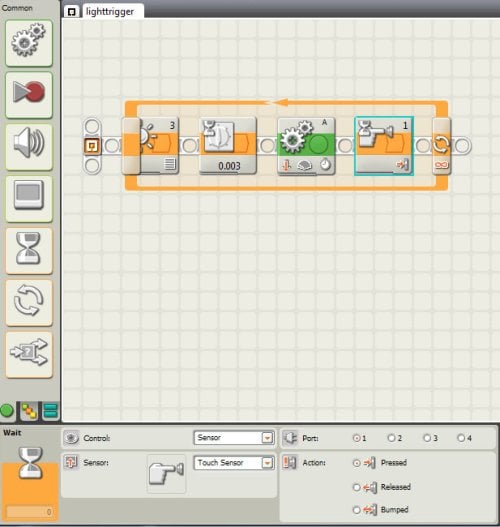 This is the reset button, preventing multiple flashes for each exposure

By setting the light beam in a place relevant to a photo, it is possible to have the flash fire at the appropriate moment for, say a grape being splashed under a hammer… 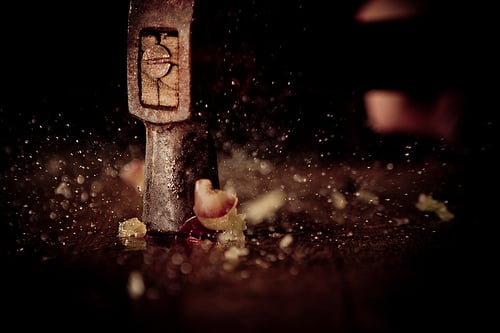 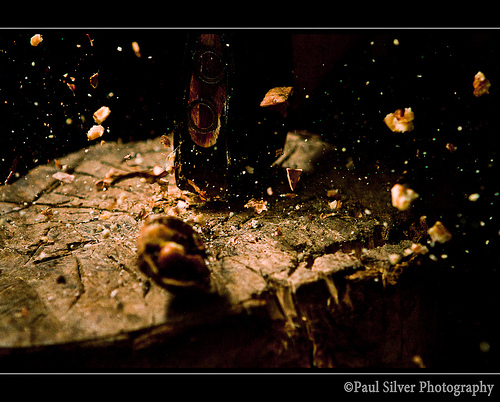 ..or a Lego man into a martini… 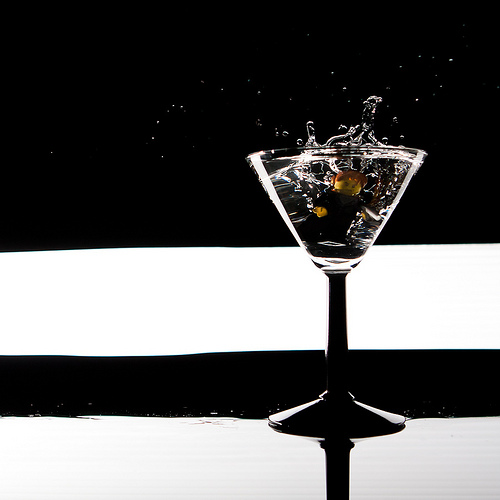 And just because I know you are going to Ask, here is the lighting setup: 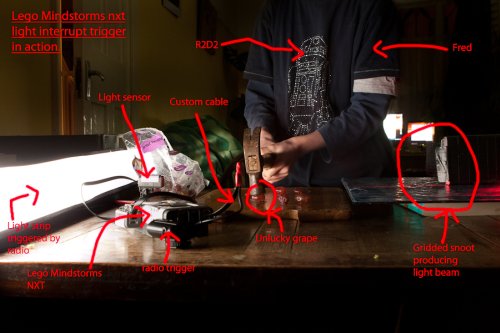 PS – Paul has a thing with strip lights (like the one on the left in the setup shot), check out his Flickr strip light group.

How bored are you from 1 to this: Making a working lens out of Lego