If you’ve ever seen a high-budget movie, you know that some of the magic is in how the camera moves. If the Director of Photography did their job well, the camera will move seamlessly from one position to another. But when you think about it, there is actually no way that a camera could do some of those moves. Take the chase shot from The Raid 2 for example (embedded below). I mean, there is no way the camera just floats in the air like this?

And this is what we’ll do today. We will look at how to create three shots that defy physics all with a very minimal budget. All you need for these shots is a gimbal – we’ll be using the Manfrotto 300xm and some pipes and cables. For all the shots below we had our camera secured via extra cables and security cords. If you put your camera in the air, always make sure that it is well secured.

There is a great use of this technique in The Raid 2 chase scene. It has not one, but two handovers through a car window. Not only that, one operator is dressed like a car seat so the transition is smooth. Take a look at this video starting at about 8:52.

In our version of the handover, the camera closes in on a subject. It starts from far away in a wide shot and establishes a location. Then the camera slowly closes in on the subject until it gets extremely close. Here is the thing though, the camera “flies” through a window between those two positions. Of course, the camera can not make this pass without some sort of assistance.

This effect can be quite claustrophobic if you close in very tight on your talent. Or, it can be just an interesting way to start your story.

While this shot may seem impossible at first it is actually a very easy shot to create. All you need are two gimbal operators, one to handle the exterior shot and another operator waiting behind the window. Specifically, for this shot, we also used a monopod-like kit called the Gimboom, because this shot is easier with a long handle.

The first operator starts walking towards the house and once they arrive at the window, they hand over the gimbal to the hidden operator who then completes the shot. 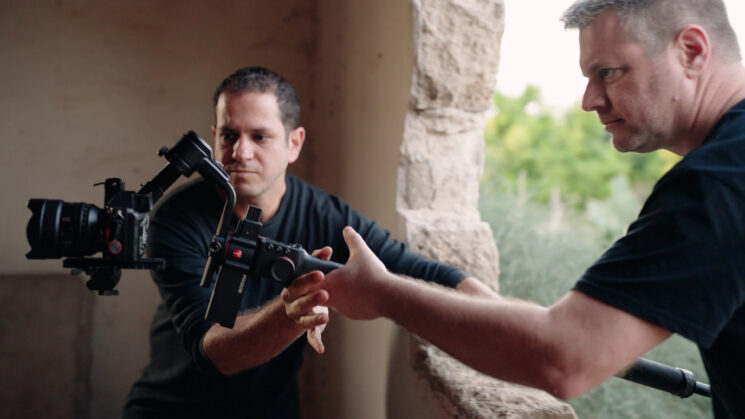 Despite the name, there are no fishermen in this shot. But once I go over this shot it’s easy to see how it got its name.

In this shot, the camera starts very low and follows the talent through a flight of stairs.

Remember that scene from Mission impossible where Tom Cruise descended to the super secured safe, and the camera follows? Something like this. only in reverse.

This is a great shot to add some suspense to a moving talent.

While the fisherman is not as easy as the handoff, you can still pull it off with almost no budget.

Start by mounting the gimbal to the pipe. Here, we are using the Manfrotto Move quick release which we have prepared in advance so we can start shooting ASAP. Then, put two ropes on each side of the pipe and run them through the pulley. We are doing that so make sure the gimbal does not move sideways. You’d also want to make sure that the camera has quite a few secure connections to keep it safe.

Now you secure the pulleys to a rail and gently pull the camera up. I love the 300XM because you can control the gimbal using a detachable remote as it moves on the cable. OK, now you get why we call it the fisherman. 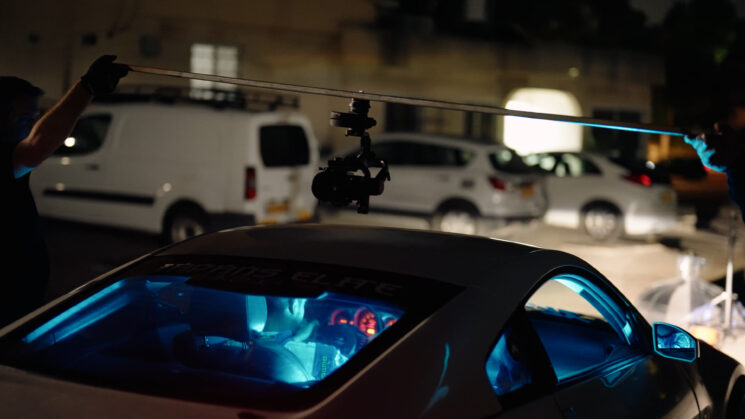 Our last shot for the day flies a camera over a car. Now, you could do this with a drone.

Or you can use “the middle shot”, where we use a long pole to get the gimbal precisely over a car. And again we are using the move quick-release to get the 300 on the pipe. We are also shooting upside down to work with gravity and not against it.

For this shot, we got two operators, one on each side of the car so the gimbal is standing right in the middle. This allows us to slowly go up and look at the driver. Then we can fly the camera over the car as it moves forward.

making a “complex” shot is easier than it may seem and if you take some time for planning you can get amazing results. The tree shots above – The Middle shot, The Fisherman, and the Handover – are not hard to execute. They just require a little planing and a good team.