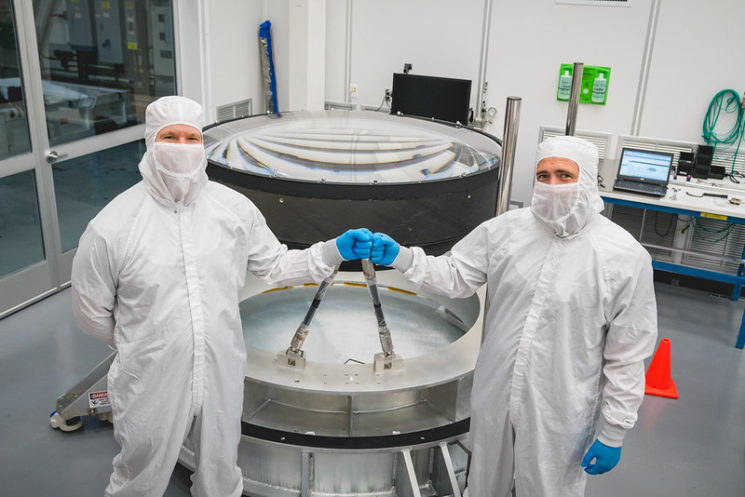 Have you ever wondered what the largest lens in the world looks like? It belongs to the Large Synoptic Survey Telescope (LSST), and its diameter is 1.57 meters (5.1 feet). It will be paired with a massive three-ton camera to study the sky and take enormous 3.2-gigapixel images every 20 seconds.

The LSST is currently under construction in Northern Chile and it will be placed atop of a mountain at an 8,800 feet high peak. Its optical assemblies are designed by Lawrence Livermore National Laboratory (LLNL) researchers and built by Lab industrial partners.

As you can probably imagine, everything about this telescope is massive. LLNL writes that its key feature is certainly a set of three lenses. One of them is over 5 feet in diameter, which makes it the world’s largest high-performance optical lens ever made. It’s paired with a smaller lens 1.2 meters (3.9 feet) in diameter and another smaller one, 72 cm (2.3 feet) in diameter. It took over five years to build this massive lens assembly. The two lenses were recently mounted together in a carbon-fiber structure and shipped from Tucson to the SLAC National Accelerator Laboratory in Menlo Park. After a 17-hour truck journey, they arrived at the destination intact.

The lenses will be integrated into a 3,200-megapixel digital camera the size of a small car. It’s already more than 90 percent complete and due to be finished by early 2021. Along with the powerful lenses, the camera will capture full-sky hi-resolution images. LLNL explains that the images’ resolution will be high, that it would take “1,500 high-definition television screens to display just one picture.”

Once completed, the LSST will take digital photos of the sky every 20 seconds, making a high-res photo of the entire visible southern sky every few nights. Over a 10-year period, LSST will detect about 20 billion galaxies, LLNL writes. This will be “the first time a telescope will observe more galaxies than there are people on Earth.” What’s more, it will create a time-lapse “movie” of the sky.

The LSST is set to start shooting the southern sky by 2023. It will help the researchers to better understand many mysteries of the universe such as dark matter and dark energy. They will also be able to study the early universe, track potentially hazardous asteroids, and observe exploding stars.

Gemo Copter is the world’s fastest-climbing drone, with a top speed of 117 MPH and 0-to-60 time of 1.3 seconds