I’m a big fan of step-up rings. I buy all my circular filters in 77mm diameter (the largest diameter of all the lenses I own) and then use step-up rings to be able to use them on lenses with a smaller diameter. It’s a great approach that saves you an absolute fortune because you don’t have to buy your polarizers and variable NDs in five different sizes. You buy the largest size you need and then spend $1-2 each on step-up rings.

But this new device, the REVORING looks like it wants to be the only step up ring you’ll ever need. It’s currently launching on Kickstarter, where it’s already more than quadrupled its goal, and it’s a pretty interesting concept. Although, it’s not going to be ideal for everybody just yet.

The REVORING comes in three sizes of filter thread; 52mm, 67mm and 82mm. So if, like me, all your filters are 77mm, you’re going to be buying them all over again. And even if I had all 82mm, each filter thread diameter only supports lenses up to a certain diameter, too. The 82mm one, for example, only supports lenses with a thread diameter of 67-82mm (although, why you’d use an 82mm step-up ring with an 82mm filter on an 82mm thread lens I’ve no idea). 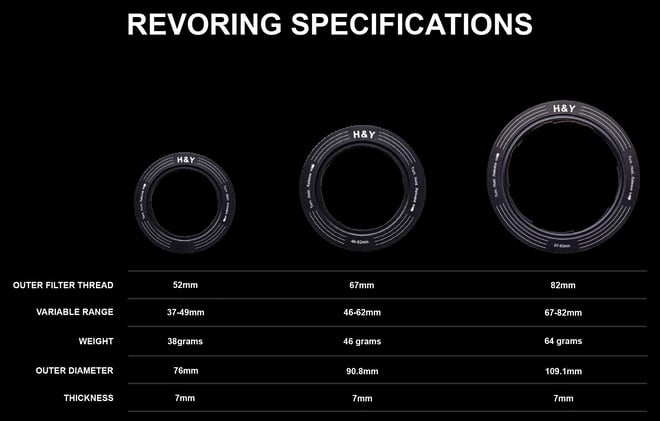 So, they’re not going to be ideal for everybody with this initial offering. Hopefully, they’ll start to offer more sizes and a wider range of variable inner diameters in the future. But even if they’re not for you just yet, one has to marvel at the engineering of the variable diameter locking mechanism that’s gone into this seemingly simple idea. 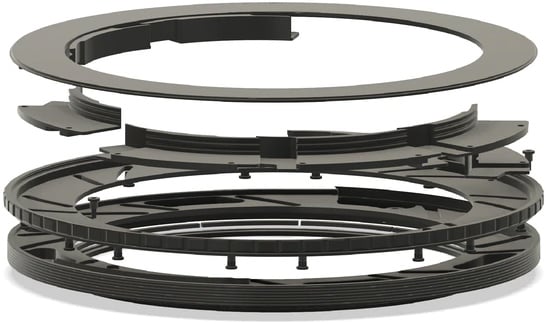 If you don’t already have filters and all your lens diameters are fairly large, then they’re also offering REVORINGS in kits with a variable ND + circular polarizer combo filter made from Schott B270 glass with anti-reflective coatings in each of the three sizes, too.

The bare REVORING starts at around $23 for the smallest size up to around $30 for the largest or $75 for a bundle containing all three. If you want it with the VND+CPL, you’re looking at around $140 to $150 with the complete set coming in at $412. Or, for around $475 you can get the “Full Monty” bundle which includes the regular REVORING as well as the VND+CPL versions, both in each of the three sizes.

Naturally, once they go on general sale, the prices will be increased. The current pledge prices on the campaign say that they’re at around 30% discount on the final price. If you want to find more about the project and back it for yourself, head on over to Kickstarter.

While the idea is pretty neat, I think I’ll be sticking with the filters I already have and my step-up rings. How about you?

A step by step tutorial on building an IKEA beauty dish

A step-by-step guide to using the Waveform Monitor

« This Insta360 ONE R teardown shows they packed a whole bunch of tech inside that tiny body
This Nikon SP review is about 60 years too late, but what a beautiful camera »