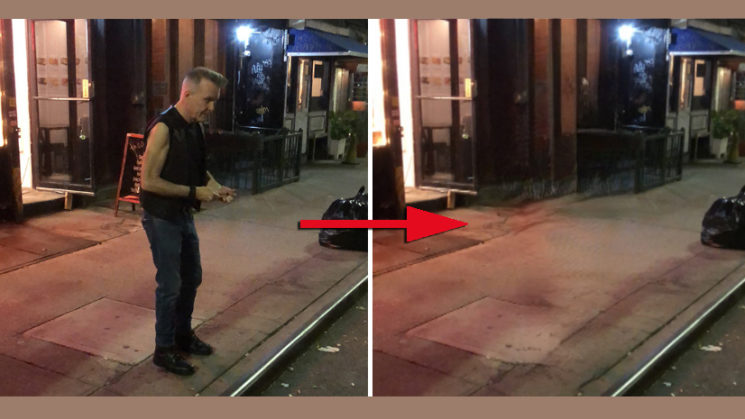 The problem with photographing busy locations is that people will always be there to ruin your shots. But not anymore! Bye Bye Camera is an app that automatically removes people from your smartphone snaps. It’s an art project, a camera “for the post-human era,” but it definitely has a practical application, too!

The Bye Bye Camera was designed by an artist who goes by Damjanski and his collaborators Andrej and Pavel from Russia. Damjanski describes it as “an app for the post-human era” which “takes out the vanity of any selfie and also the person.” In an interview with Artnome, Damjanski talked about his idea behind the app:

It’s a gentle nod to a future where complex programs replace human labor and some would argue the human race. It’s interesting to ask what is a human from an Ai (yes, the small “i” is intended) perspective? In this case, a collection of pixels that identify a person based on previously labeled data. But who labels this data that defines a person immaterially? So many questions for such an innocent little camera app.

As I mentioned, Bye Bye Camera is more of an art project than a practical solution. It’s intended to make you think about our world, humanity, and our future. But if you’re more into practical than philosophical stuff, the app sure lets you focus on them, too. As you may assume, the Bye Bye Camera uses AI to automatically remove people from photos. It combines an image recognition app called Yolo with a neural network which analyzes the background. The neural network repaints the background after humans are removed, something like Adobe’s content-aware fill. The results aren’t always stellar, but the app still does a pretty good job in many cases.

The Bye Bye Camera is available through the Apple store for $2.99, and it’s not available for Android. So, I guess that us with Android phones will have to do it the old fashion way and just scream at tourists to move.