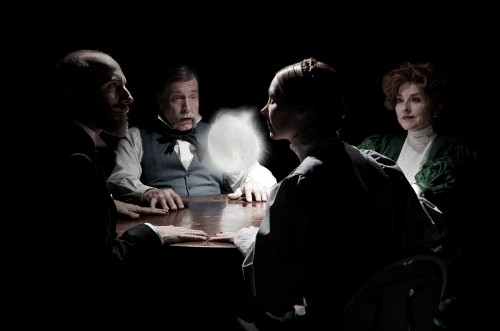 This story tells the tale of how Jolene Lupo shot her high speed spirit photograph. While some of the stuff is pretty specific, I love her holistic approach and the way both the concept and final image were built. this is how she describes it:

Anything worth doing isn’t easy. For my senior thesis project I was inspired by Louis Kaplan’s The Strange Case of William Mumler, Spirit Photographer. For those of you who don’t know him, William Mumler was a ghost photographer controversial photographer in the 1860’s who used experimental methods to create the appearance of ghosts in his portraits.

From the beginning I knew that I wanted to use an exploding balloon to represent a ghost appearing before a séance but with no prior experience working with high-speed photography, I started by contacting Edward Horsford. Following his advice I purchased the camera axe with a microphone attachment and hot shoe attachment.

Since it was important to shoot the subjects in the same frame as the balloon, it had to be planned perfectly (as everyone would be wet after the first balloon). My project started with shooting tests in the bathtub. 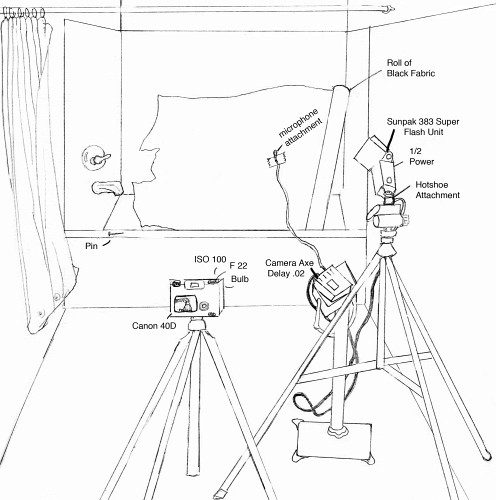 I learned a few things fast:

If you missed the past articles on photographing bursting water balloons, here’s a quick rundown on how it all works: The mechanism is built from a trigger (set to General Sensor Mode) with a flash attachment and a microphone attachment. So when the balloon pops, the sound triggers the flash. In order to sync the camera up with the flash, everything is set-up in the dark and the camera is set to the bulb setting.

I acted as the guinea pig for the early test images. At first I was popping the balloons by hand with a pin. However I needed to create a tool that would pop the balloon without needing to physically hold the pin. I ended up crafting a device out of a chopstick, 3 pins and some gorilla glue.

For my next image, I had affixed the popping device to my dress with gaffer’s tape and had my assistant hold the shutter open with one hand and throw a balloon at me with the other. I later came to realize that I could have been shooting tethered to a laptop with Canon’s free EOS software to open and close the shutter. 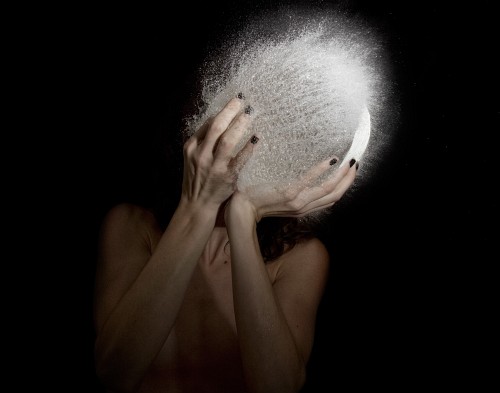 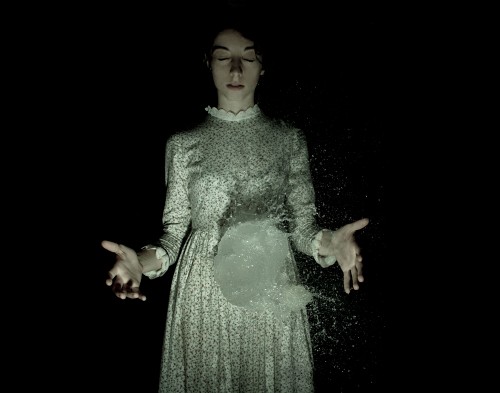 The next step was moving out of the bathroom and changing the lighting to look more like the orb is lighting the subject. I started by covering my bedroom in plastic sheeting, which was taped and clipped to all of my furniture. By this point I had found a round table for the final image so I used it as a starting point for the next shot. The flash is sitting on the table angled to light the orb and the subject while having the shadow cast by the orb fall below the subject’s face. 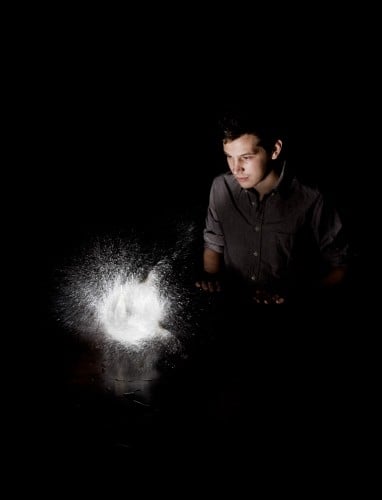 Once I had gotten down the lighting, I needed to find costumes. Through a friend I was referred to the Community Center of the town of Roxbury, located in the Catskills of Upstate New York. The town puts on turn of the century reenactments and has a whole barn full of clothing. Lucky for me; they were willing to let me borrow a few outfits.

For the big shoot, I needed to find a team of people to help out. I had several assistants helping with setup, and two stylists for the models. We started by constructing a small room out of V-flats with a window leading to the back of the scene for the person throwing the balloon to stand. We covered the floor in plastic sheeting and set the furniture in place. 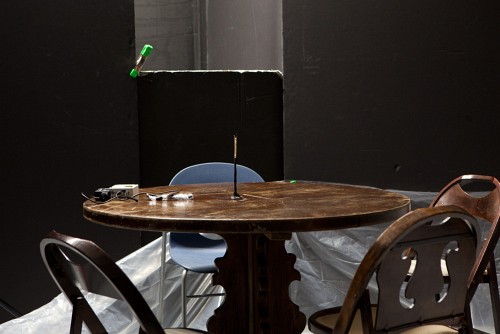 The set-up for this was slightly more complicated than what I was using for my tests. Since the camera is shooting on the bulb setting, I had the option of setting an unlimited number of cameras to record the scene. I decided to use this to my advantage by setting up two cameras: the 5D Mark II and a Calumet 4×5 view camera. Usually I shoot with film, but because of the experimental nature of the project and the cost of Polaroids, digital just made sense. Shooting tethered to the Canon EOS Software definitely helped when testing the lighting and composition.

The camera axe is again connected to the microphone but instead of connecting the hot shoe attachment to my flash, I attached it to a Pocket Wizard (wireless transmitter). This enabled me to shoot with two flash units and set the flashes much farther from the trigger than the short hot shoe attachment allows. I had the other pocket wizard connected to 2 Canon 580 EX Speedlites which were super clamped to a cross bar hanging above the scene. 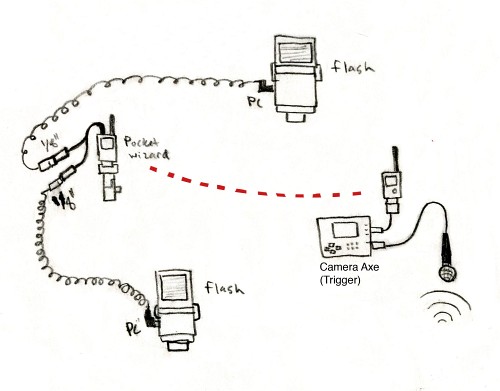 Hidden on the model’s lap was a zippered plastic bag containing the trigger and the other pocket wizard. The microphone wire slipped out from the bag and was taped in place on the table near the popping device. 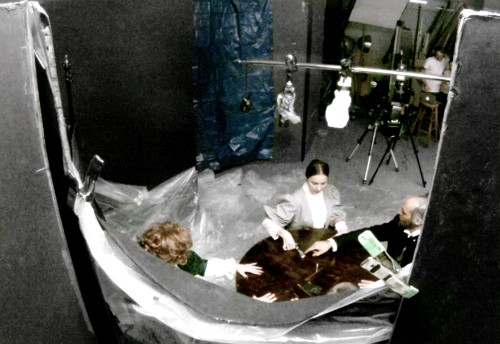 Balloon thrower’s POV-Shows the model taping the microphone into place. 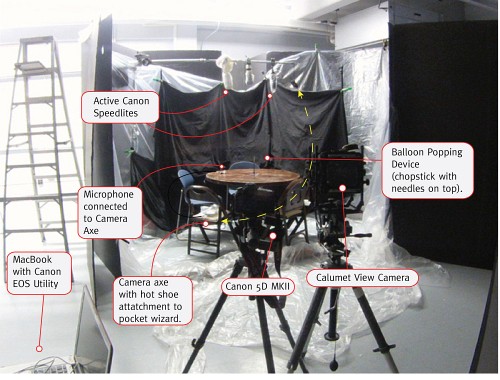 Through test shots, I had perfected the lighting and the models perfected their expressions. It was time. I got into position behind the scene, with a water balloon in my hand, staring at the location where the popping device was located. A second later the lights went out and after listening for both shutters to open, I tossed the balloon into the scene. The flash went off, the shutters were closed and the lights turned back on.

Luckily, the first shot was all it took. But I still had the models pose, begrudgingly, for one more.

The final image was the frame shot with the 5DMark II, as the composition was slightly stronger than the film version. The exposure was set to F 22, bulb, ISO 100, with the camera axe set at a delay of .03, and the speedlites set to their lowest setting.

The final framed image went over exceptionally well and was printed 40x60in for our gallery exhibition. Special thanks to Mike Falco, Louis Lucci, Edward Horsford, Sophia Cifonelli, Holly Marie Hills, Howard Michalowski, Brian Emery, Kelsey Riordan, Ron Amato, Rebecca Karpus, and Tatiana Mitina, and of course my parents without whom this project would not have been possible. 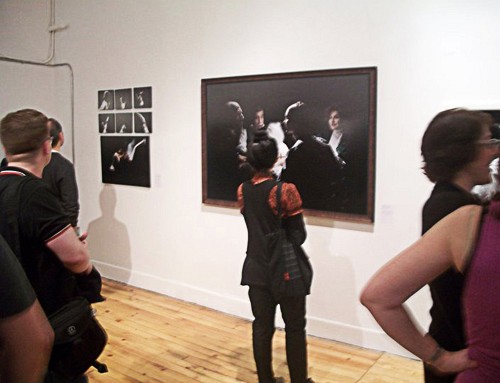 Jolene Lupo is a photographer and recent graduate from the Fashion Institute of Technology.