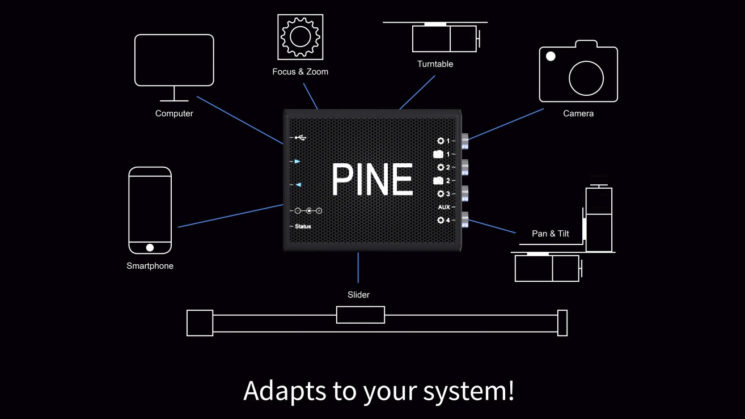 Motion control has so many applications for both photographers as well as filmmakers. From creating 360° stitched stills with your DSLR to moving timelapse and video sequences. There are a lot of complete solutions out there for this, and there are also many plans out there for completely scratch built DIY projects. But there’s very little that sits in between.

PINE aims to change that. It’s not a complete motion control system, it’s just the controller. It lets you control up to four motors from a single unit, and you can chain multiple units together. And it will let you do this wirelessly using a mobile app on your phone. PINE is currently being funded through Kickstarter,

What’s interesting to me about PINE, is the fact that it has so many applications. It’s not like an all-in-one Gigapixel unit, or a motorised slider. It can be anything you need it to be, because it’ll talk to just about anything. And yes, it seems quite expensive for just the controller, but when you can use the same controller on four or five different systems that price starts to look a little more attractive.

What PINE is and isn’t

PINE is a motion controller. Just a controller. You can connect it to almost any motorized slider or pan-tilt unit on the market. PINE will control your connected systems, allowing you to do fascinating things.

PINE is not a complete motion kit. It doesn’t include any sliders or pan-tilt units. You are free to choose by yourself or choose one of our bundles to get started with PINE.

The PINE unit itself has a bunch of connections. There is USB connectivity, along with a couple of expansion ports, four motor connections, two camera trigger sockets, and an auxiliary input. This means you can control up to four axes with a single unit, fire two cameras and even hook up an external sensor.

Each motor connection offers six pins. Four of these are for your four wires on a standard dual phase stepper motor, and the other two pins are for limit switches. This lets the device know when the motor has hit the end of its run, say on a slider, and doesn’t burn the motor out trying to keep pushing it along.

If you need more than four axes, say for a pan/tilt head on top of a slider with both zoom and rack focus abilities, you can hook up multiple PINE units to your creation and control them all wirelessly from within the single mobile app.

The app comes pre-loaded with a bunch of different motion control features including timelapse, gigapixel imagery, 360° stitching, turntable mode, astrophotography and even 3D scanning. Naturally, it also automatically triggers your camera where needed while it works through the sequence of movements, too. Example videos showing each of these are on the Kickstarter page.

The price for the unit currently starts at €399 (this’ll go up to €499 once they hit retail) for a pre-production unit. The production units are €449, or you can get a pair for €799. It seems quite pricey, but when you consider that you can use this with multiple devices, it works out a whole lot cheaper than buying a slider, Gigapan and all the rest of it each with their own controller.

Even though it’s not a complete solution, there a couple of bundles on the campaign. One contains the PINE controller and N-O-Tilt pan/tilt head along with all the required cables to connect everything up for €1,499. The other is a 3D photogrammetry (3d scanning) bundle for €1,999. This includes one controller, a turntable unit, a slider, a tilt unit, and all the necessary power and connection cables.

€1,999 is already a pretty amazing price for a quality all-in-one 3D scanning unit, but to also be able to reconfigure this to work as a regular motorised slider, or create Gigapan/360° images is very cool.

I’ve been looking more into motion control lately as part of my 3D printer research. I want to build my own systems to let me control cameras in various ways. A unit like PINE would save me a lot of time and headaches when it comes to actually programming the things, but I almost feel like buying this would be a cop-out for me. I like to punish myself and learn how to do this stuff myself.

But with wireless control from my phone or tablet is very tempting, though. Especially at only €499 for the basic unit once it goes on general sale.

If you want one though and to find out more and back the project head on over to Kickstarter.