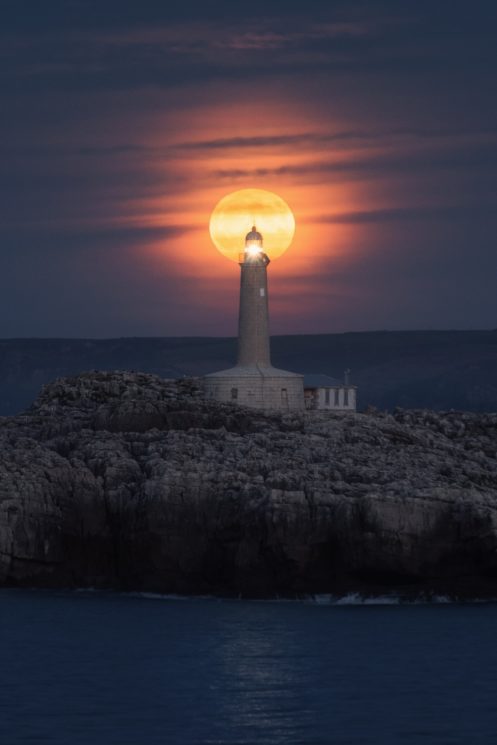 Pablo Ruiz Garcia captured a spectacular image of this Halloween’s blue moon. A full moon occurring on Halloween is rare and only happens every 18 to 19 years, and a super moon is even rarer. We do not know for sure why blue moon is the name of this super moon. To the casual observer a full moon in general can have a slight blue tint due to smoke or particles in the atmosphere.

Pablo captured this image at the lighthouse of Isla de Mouro, Santander, Cantabria Spain. He will in the following tell us a little about how he captured the image.

Pablo informs DIYP that he planned the image using the PhotoPills app, and that is was shot from the Magdalena peninsula. According to Pablo the distance was around 1km from the peninsula to the island. The image is shot with a Nikon D810 and a Nikkor 70-300 lens.

Pablo tells us that the forecast was very promising predicting clear skies, something that is rather rare in this area of Spain. The opportunity was too good to miss so he and some friends made the journey out here.

That day the sun set at 18:07 and the moon appeared at 18:23. Twenty one minutes after the moon rose Pablo captured the image. He further informs us that clouds somewhat hid the details of the moon, but the moon served to enhance the warm lights in the clouds something which yielded a very nice end result.

Pablo Ruiz Garcia is a landscape photographer based in Santander, Spain. You can see more of his work on his Webpage and follow him on Instagram. The image is shared with permission.