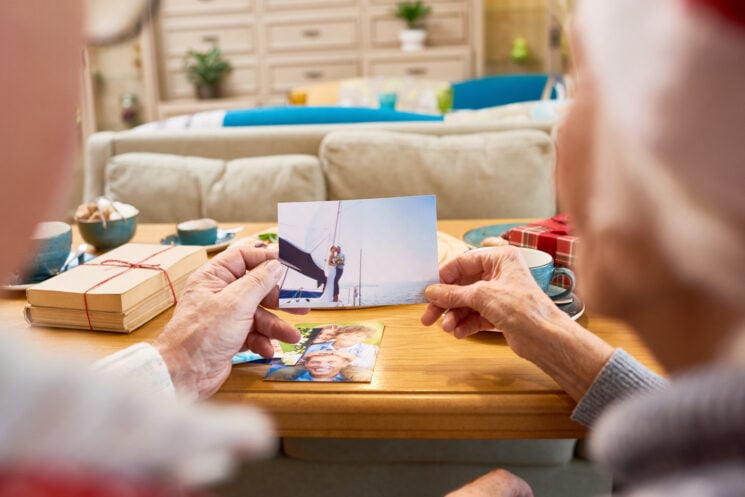 Photos, especially printed ones, have the power to throw us back in time and evoke strong emotions within us. But they also have healing power for those suffering from dementia. Recent research has shown the benefits of photo reminiscence therapy (pRT) for dementia patients. But it’s even more interesting that they don’t need images from their lives – even generic stock photos will do.

A coalition of organizations joined forces to conduct the research, including National Institute for Dementia Education (NIDE), CERTUS Institute|CERTUS Senior Living, Vivid-Pix, Tellegacy, and achi. The goal of the project was to “fill the gap of knowledge and provide a nonpharmacological intervention that uses photo reminiscence therapy (pRT) to improve the quality of life for those living with Alzheimer’s disease and related forms of dementia.” But also, it’s aimed to help caregivers better connect with those in their care.

“Reminiscence Therapy (RT) involves the discussion of past activities, events and experiences with another person or group of people, usually with the aid of tangible prompts such as photographs, household, and other familiar items from the past, music and archive sound recordings.”

As I mentioned, this study focused on photos and it was conducted in three five-week phases. The first two phases served to identify the influences of generic/general-themed stock photos on the patients. The third included personal photos provided by the family of the person with dementia. Both groups of images included family, self-portraits, pets, landmarks, newspaper articles, nature, and abstract themes. The researchers used black and white as well as color images. Personal photos provided by patients’ family members were enhanced using Vivid-Pix to improve color, contrast, clarity, and overall quality so that they’re more recognizable and relatable.

University students were educated and prepared to conduct this study. In the first two phases, they used color and black and white generic photos featuring family portraits, landscapes, famous landmarks, pets/animals, and comical and abstract images. Each session used five to 12 photos with themes including self-image, family, emotional events, homesteads, and pets.

The CERTUS team measured patients’ level of interest in photos as they were shown to them.” Throughout the process, we noticed that residents who liked the photos would talk more about them; there was a strong emotional pull to photos of things they recognized, including pets, people, and familiar landmarks” the study writes.

An interesting thing scientists noticed was that subjects would try to relate generic photos to their own lives. “For instance, a generic or stock photo of a little girl encouraged residents to talk about their daughters, and photos of pets inspired stories about childhood dogs and cats,” the paper reads.

The final five-week phase consisted of personal photos, ranging from six to 58 photos throughout the session. In this phase, the researchers “noticed a stronger emotional pull and increased engagement” with the images. Just like the stock photos, themes included family, self-portraits, landscapes, landmarks, and pets/animals.

“We noticed that word structure formation and narrative storytelling were more vivid and took place more organically when students used personal photos. The CERTUS team also documented that residents were more successful at remembering specific details during and after the session when they related to their own personal photos. This makes sense as research shows a person with dementia processes their world primarily through sensory/emotions — they are better able to remember things to which they have emotional ties [6,7,8]. Overall, the team noted that residents smiled more frequently and engaged in deeper conversation when photos were recognizable.

Furthermore, CERTUS residents had greater verbal and somatic responses when engaging in conversations about their own personal photos. In many cases, residents shared detailed recollections of the time and place of photos with students, details that were later confirmed by a family member or friend. Many of these family members or friends were surprised and grew emotional upon learning that the resident vividly remembered the event or time captured by the photo, events the family member or friend had assumed were forgotten memories. These recollections typically occurred within 10 to 15 minutes of the session for several residents participating in the pilot study.”

According to Freitas and Holloway, over 6.2 million Americans are currently living with Alzheimer’s disease, which is one of the main causes of dementia (70 percent cases). “This number is expected to triple within the next few decades,” the scientists warn, and “it is an epidemic that is soon to be classified as a pandemic.” While there’s still no cure in sight, it’s encouraging to know that there are ways to make lives easier and more pleasant for those suffering from Alzheimer’s or other dementia-causing conditions. And on this journey, photos could be a powerful ally.  Make sure to read the full paper here and find more info about dementia on NIDE’s website.