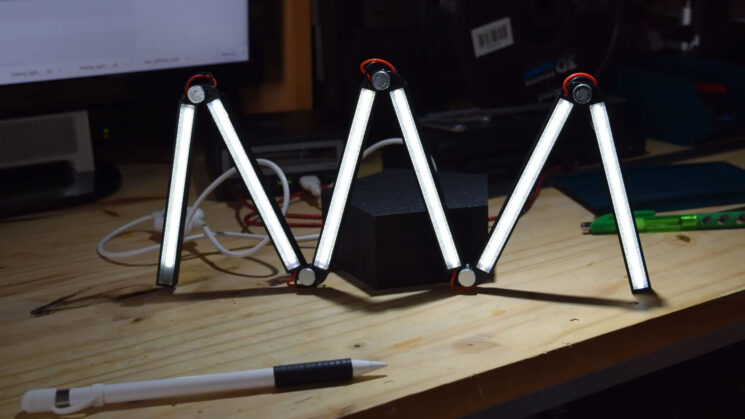 Spekular, the lighting system released by Spiffy Gear back in 2017 was a particularly unique lighting system at the time. Offering a modular setup with interlinked joints that would let you chain a bunch of them together in order to create all kinds of rings, triangles, stars and even panels. I have a couple of Spekular kits myself and they’ve been fantastic for creating light in situations where more bulky LEDs and softboxes would have been impossible.

Recently, though, while browsing for something on Printables, I found a 3D printed lighting system that looked awfully familiar. It seems that somebody, who goes by the name of cfaulkingham, has designed a system that basically looks like a mini open source Spekular clone that you can 3D print yourself. What makes this one particularly useful, though, is that it runs on only five volts.

#3dprinting i am making a foldable photo light.

As you can see from the photo above, the 3D printed solution is a little smaller than  Spekular, but from a design standpoint, they work very similarly and have been released under a Creative Commons CC0 Public Domain license. This means that you can do whatever you want with them. Scale them up to sizes that are similar to the original Spekular system, modify them to accept even more segments, or for use with 12v LEDs. You could even swap out those white LED strips for something like a WS2812B addressable RGB LED strip and control them with an Arduino or ESP32.

Other than the cost of the filament to make the printed parts, there are very few extra items you need to actually buy. A few bits of hardware, the LEDs themselves, obviously, and some wire.

Overall, your total cost for a set like that in the photo at the top of the photo should be less than $40. And way less if you’ve already got wire lying around, find a better deal on the LED strips and order the other hardware from somewhere like AliExpress or eBay (that often takes a while to arrive, though). Of course, you can always spend way more if you do go the WS2812B or high CRI LED strip route, too.

While perhaps not as versatile as the original Spekular kit, these should be great for lighting up small sets for things like toys, products or food photography. They should be pretty good for macro photography, too, or if you do go with RGB LEDs, as accent lights in dark corners of your scene.

If you want to make your own, you can download all of the files from Printables.

Want to own a print by Dr. Jane Goodall? Check out this charity print sale

« 7Artisans has officially announced its 225° 4mm f/2.8 circular fisheye lens for APS-C and MFT
OWC releases Copy That for Mac to let you quickly copy, backup and verify your media cards »