So, the whole 3D photos thing that’s been getting blasted all over Facebook the last year or so has typically been an iPhone thing (thanks to its depth sensor). And, sure, you can take any image and create your own 3D photos in Photoshop, but it’s a bit of a long-winded hassle. What if there was an app that could let you create 3D photos automatically on any phone? Well, now there is.

The product officially launches in the second quarter of 2020, and it’s coming to both iOS and Android. But it’s available in the Google Play Store right now as a development version. As such, it may be a little unstable on some devices, and the final quality likely isn’t as good as it will be when it hits official release.

The app lets you add a 3D frame to a photo, shoot a new 3D selfie, or convert a photo you’ve already shot into 3D from the main app screen. 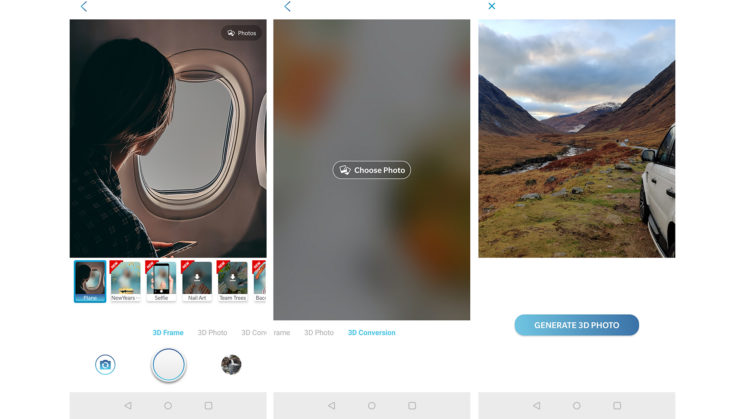 The 3D photos you create within the app only seem to be shareable from within the app, too. They don’t even show up if you try to load them from the regular Facebook app. This is a bit of a pain, because you have to login and use the web-based version of the Facebook UI (and it keeps bringing up the desktop version, not the mobile version), but it works. I posted a couple of test shots to my Facebook page from my Christmas trip to the Scottish Highlands.

Considering the app is only working from 2D data, and it’s making a best guess, it doesn’t do too badly, all things considered. It does a fairly good job, except for the water between Rich’s arms, and cutting out the edge of the rock at the bottom right. I did give it some pretty awkward photos to attempt, though, to be fair. Some results definitely aren’t quite as good as others. I’m not sure what’s going on with Rich’s head here.

As I mentioned, the app is still a few months out from an official final release. So, hopefully, the AI engine will better be able to distinguish cleaner outlines and figure out what is somebody’s head and what is the background.

If you want to check it out for yourself and mutilate photos of your friends, head on over to the Google Play Store and download it or visit the LucidPix website (it’s also coming to iOS).