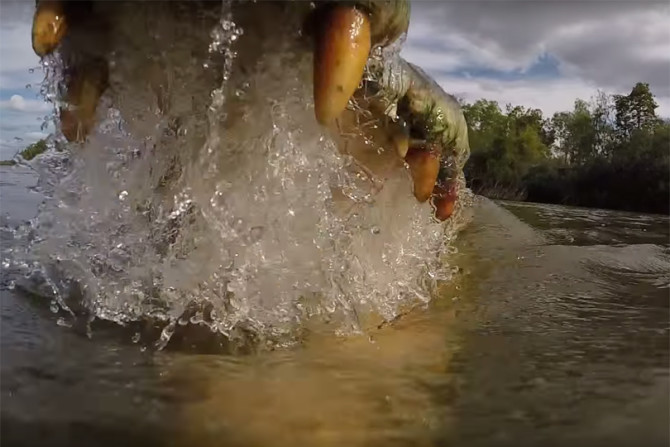 His goal: get the “salties” to take a shot at the unusual prey.

The results: National Geographic worthy point-of-view footage of how the crocs bite their prey.

Frost, together with videographer Melissa Lesh, travelled to Northern Australia to film the powerful reptiles near the city of Darwin.

Considering the massive size of the crocs, with males averaging 5 meters and 450 kg, the duo’s camera setup was surprisingly small and lightweight. The team simply mounted a GoPro to the top of a remote-controlled boat and used duct tape to attach protective foam blocks around the camera.

Clarifying that there was nothing fancy about their rig, not even the RC boat, Lesh told NG that it was “the kind you would find at a toy store or hobby shop”.

Frost and Lesh spent a month with the crocs and have nine POV bites, as well as other awesome footage, to show for it. This unique footage also shows various strategies the crocs use to capture prey.

I bet by this point some of you are wondering how many GoPros were sacrificed in the name of science, and unbelievably the answer is none! That’s right, nine times the animals with the strongest bite ever measured (4,900 kg per square inch of pressure) chomped down on the flimsy contraptions but the duct-taped foam worked like magic.

An example of one of the bites, although unsuccessful, can be seen below:

The prehistoric-looking reptiles were almost hunted to extinction, but preserved habitat and regulated hunting allowed the Australian salties’ population to recover over the last 30 years to roughly 100,000. The impressive recovery of the crocodile population, along with the never ending increase in human populations, has lead to a number of fatal interactions and some are now calling to kill some crocs to control their population.

That being said Foster, as well as other crocodilian experts, claims that culling is not the answer and that people need to be educated about safety around the animals.

According to Business Insider this was Frost’s first feature story, and he hopes the feature will be the start of an education campaign.

Foster and Lesh will be returning to Darwin in December to capture more footage of these incredible crocodiles.

By the way, remember I mentioned the pair captured awesome footage other than the bites? Check this out: