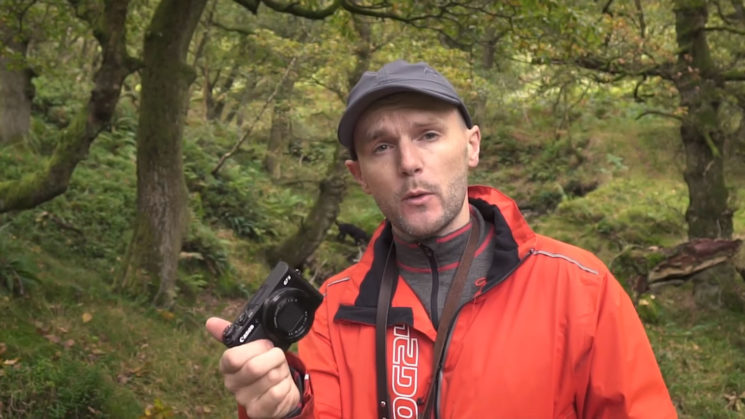 Landscape photographer Simon Baxter uses days like these for location scouting. In this video, he explains how he finds new locations to explore, and the things he’s thinking about while surveying the scene. Simon also explains why does this during those bad weather days.

I’m not really all that much of a landscape photographer. I do shoot portraits in wilderness locations like these, though. I also often spend the dull days seeking out new places to photograph people, using similar methods to Simon.

Figuring out where to go

The first job is to figure out roughly where you’re going to go. For me, it’s quite easy. I’m either looking in my immediate surrounding areas or heading to the Lake District. Outside of that, it’s typically planned trips and I know exactly where I’m going to be – as happened during a visit to Scotland earlier in the year. If you’ve absolutely no idea, try starting with the areas surrounding your town or city.

Simon mentions using the Google Maps satellite view to get a good overhead perspective of a general area, and look for details. Look for forests. Look for gaps in forests. They can be an indication that you’ll get sunlight streaming through at certain times of day. Blobs of water hidden amongst the trees can also provide some great insight.

But don’t forget to look at the regular illustrated version of the map, too. It can often show streams, ponds and small lakes otherwise hidden by the trees or landscape.

Why to go when the weather sucks

The thing about grey dull days is that it helps to remove distraction. You’re not seeing the gorgeous light. You’re just seeing the landscape. The shapes and the forms. You’re seeing a clean scene that lets you figure out your compositions, where you want the light to fall, and pre-visualise your shots.

Seeing things this way, lets you envision far more options for a location. Seeing it on a day with perfect beautiful light often locks your mind into getting that one shot, that one lighting scenario.

What gear to take

Simon’s location scouting camera is his former vlogging camera. A Canon G7X Mark II. It’s a fantastic little camera for this sort of thing. It’s lightweight, fits in your pocket, but has enough capability to let you get some really great tests shots, and it lets you shoot raw.

But you don’t need to go out and buy a camera specifically for location scouting if you don’t have something like this already. I used to use my iPhone for my location scouting photos. I didn’t want to have to carry around a whole ton of gear with me. Also, the fact that my locations are typically in the middle of nowhere, GPS tagged photos is really useful. I have since switched over to a Nikon D5300 as my main location scouting and vlogging camera. Like my phone, it features a built in GPS, but also offers me a lot more control.

Sometimes, when I’m scouting with friends, I’ll throw a couple of lightweight light stands, TT600 speedlights and 60cm softboxes into the car, too. This lets me try out some quick lighting tests if I get the urge. As a rule, though, they stay in the car when I get out to look around, but they’re always handy, just in case.

It helps to print out a map of the place before you go. Or have it on your phone if you’re going somewhere that still gets signal. Mark off a few eye catching spots that you think you might like to visit. But don’t set your heart on them. Usually when I go out, I’ll have a final destination marked out and a couple of stops along the way. Usually, though I’ll get distracted by 20 other things while we’re driving around (to be clear, I am the passenger, not the driver) and never reach our final destination.

That brings up another point. For me, I love location scouting with friends. It means that one of us can concentrate on driving while the other is able to be safely distracted by all of the things one spots along the way. Some of my absolute favourite locations have been found simply by noticing an intriguing gap in a row of bushes along the roadside. Locations like this one. 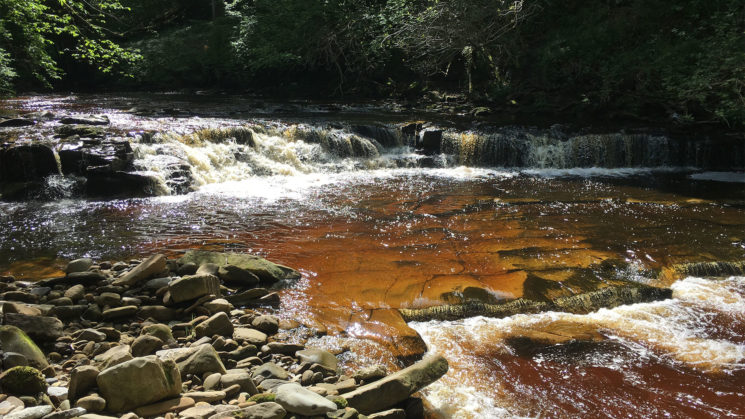 Shot on my iPhone. Without a person in the shot, you don’t really get a sense of scale. The water at the top actually drops about 4-5ft.

At each spot, I take my time to really look around and explore. With the location shown above, downstream is a bridge and then a small town. Upstream there’s about another 500 metres of wilderness. A vertical rock wall on one side, with trees growing out of its side. A slope going up the other covered in ferns and several varieties of trees. An ideal location for me.

I use apps like Sun Scout to determine where the sun’s going to be at different times of the day, and on different days of the year. Again, the above location is gorgeous from shortly after sunrise until about noon. After that, the sun goes behind trees for the rest of the day until half an hour before sunset. And even when it does come back, it only lights up a small area of the water.

Depending on the type of location you’re checking out, other apps will tell you the times of high and low tide, and can project those way into the future for shoot planning. If you want to do a night shot, yet more apps will show you at what time of year certain constellations will appear in the sky overhead.

But the key thing is to just take your time, explore, plan ahead. Even when I shoot with my D5300, I still have my phone with me. So, I have a checklist of things that I jot down. How far away it is from the nearest parking spot, best estimated times of day to shoot, how many people a location can safely hold – Is it just me and my subject? Can I fit an assistant or two, makeup artist, hair stylist? Is there room to lay out a whole ton of gear on a tarp for easy access throughout the shoot? Even in big locations, safe prep space can be in short supply.

Something Simon doesn’t really mention in the video is what to do when you get home. Personally, I transfer all the shots from my phone and D5300 over to the computer and them map them all out. Exactly where each was shot, what time of day, in which direction I was facing, and gather all my notes together. I keep a handy reference database of locations, some of which I’ve shot at many times, and some I have yet to return to.

So, on those bad light days when you don’t think you can get the images you really want, you can still be productive. Get out, explore, find new locations to shoot. Places to come back to when the weather is good. It means you’re wasting less of that good light trying to find the shots.

When you show up to a location you’ve already visited at least once, you’ll have a fairly good idea of what you want right away. Having a database of locations you know you can shoot at is also handy for when those surprise shoots pop up. Or for when your main location isn’t available and you need a backup option or two.

Finding locations with great light with the King of the urban jungle!

Tips for finding and shooting abandoned locations in an unknown city

Is there really bad light: how to take awesome travel photos in all lighting conditions