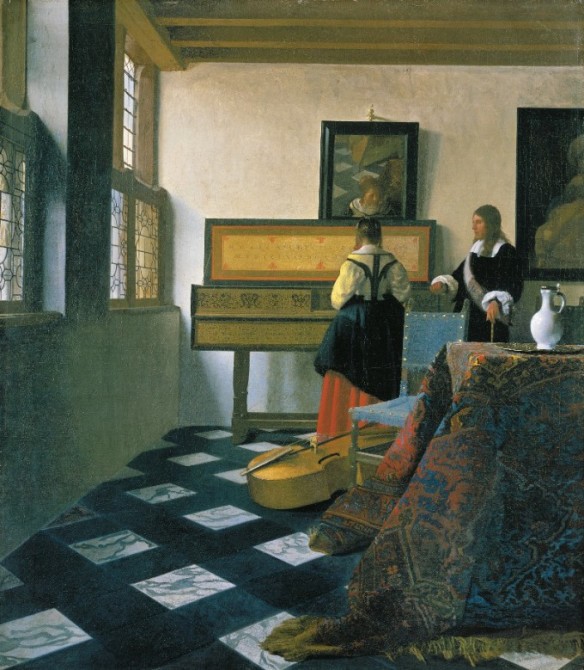 350 years ago, Johannes Vermeer once painted a piece (pictured above) called The Music Lesson. What you’re looking at is something many people have considered impossible up to today; the light that shines through the windows in the painting is painted with exactly the same color that it has in real life when viewed through a projected image. It wasn’t being painted using a normal vision – it was being painted like it was a hand-made photograph. While many artists were indeed famous for implementing realism into their work even centuries ago, a painting this photorealistic has been though impossible to achieve up to even today. But for some reason, a painting like that exists, and Tim Jenison is a man who had a drive to find out how that was possible.

Teaming up with Penn Jillette of Penn and Teller, Jenison filmed a documentary chronicling the years spent trying to solve the mystery with one simple hypothesis.

“Here’s the idea: A small mirror on a stick that lets you exactly match your paint colors to the colors of your subject.” – Tim Jenison

The lengths to which Jenison went in order to find out what happened is not only painstakingly precise and awe-inducing on its scale; it’s an example of what a guy can do when he’s passionate about something. In order to test out whether he was truly correct or not, Jenison recreated the entire painting in real life to photograph from. He recreated the wooden furniture out of wood; no 3D printing was allowed at all. He had to find a practical way to achieve everything included in Vermeer’s painting, and the end result was a complete mirror image of The Music Lesson itself.

Check out the trailer for this documentary below, and read more about the process on Tim Jenison’s personal website. Tim’s Vermeer is available in its entirety on Amazon.

For further research, here’s a full documentary on Johannes Vermeer himself.