Sometimes, the scene before you that you want to shoot just doesn’t line up with the sky that you want. Maybe it’s cloudy every night or perhaps the Milky Way just rises and falls on the wrong part of the sky. But what you can you do about it? Well, after watching this video from astrophotographer Milky Way Mike, you’ll be able to shoot and composite your scene exactly the way you want it.

Mike’s video is in response to a question he received, which was how to stack shots of a tracked sky and then composite their own foreground element in front, and the process is fairly simple. But first, what is a tracked sky? Well, it’s pretty much how it sounds. It’s a device which lets your camera move in coordination with the sky’s movement. It tracks with it.

Ok, so, technically, it’s the earth that’s moving. The stars are, too, just much more slowly. But sky tracking mounts counter the earth’s rotation so that the stars remain still in the sky relative to the camera’s movement. The technique, in this use case, involves shooting multiple images of the sky and then stacking them together on top of each other to minimise the noise in the final result.

Tracking the sky offers several advantages. It stops stars turning into small trails of light, and it also helps the images align right on top of each other. Mike runs these images through the Starry Landscape Stacker after processing the raw files in Lightroom. And then brings the result of that process into Photoshop in order to merge his foreground on top with a simple mask.

It’s a neat process that allows you a lot of control over your final image, even if the scene didn’t actually exist in reality.

I still think I’d rather try to get the shot for real, especially after having spent the last couple of weeks shooting in the dark nighttime deserts of Arizona.

But sometimes things just don’t work the way we want them to, and we have to resort to more… creative means.

How many photos should you stack when shooting the night sky? 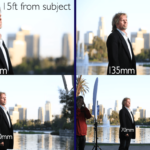