Bioluminescence is a phenomena in which leaving organisms emit light. While this effect is not really possible in a high speed photography setup, can be very well faked with the following recipe. 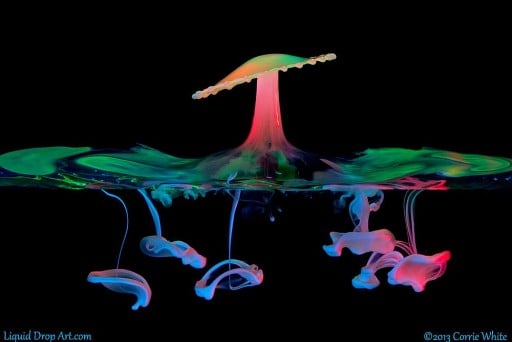 In this shot you can see the set-up and the position of the flash guns. You can also see that the water in the aquarium is white from the milk in the drop collision and the cream for the underwater flow. The colours come only from the gels on the flashes.

The next photograph is a processed version of the image on the monitor. I had to clean up some milk spots on the front of the tank and raise the light levels. 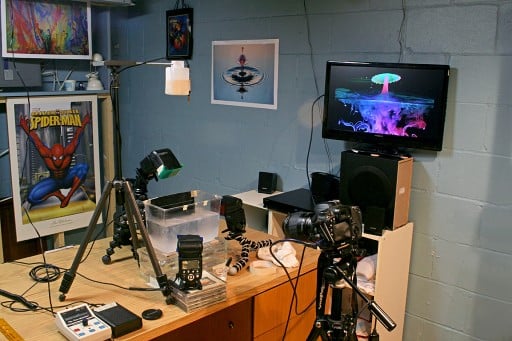 For the mushroom shape/cream flow series, I first drop some cream into the water with a medicine dropper, then very quickly trigger the drop sequence to try to catch the flow under the water before it gets too far down.

The first image gets some very clear and detailed shapes, but the second and third shots get a lot more activity and disorder from the advanced flow of the cream. The image on the monitor is the third one in this particular set. The image “Bioluminescent Splash” (leading this post) is the first in the clean water. 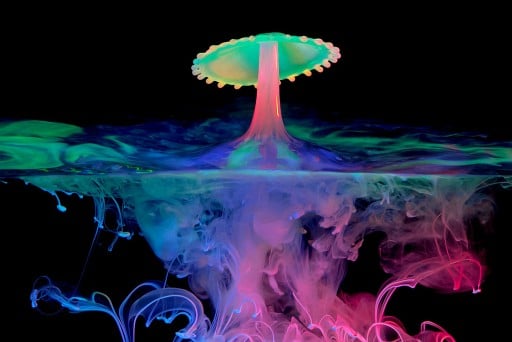 Corrie White is a photographer based in Ontario, Canada. She Wrote a great book on water drop photography (reviewed here). She shoots breath taking water drops and other water inspired photographs. You can follow her art on her Flickr stream, on her site, or on Facebook.

How To Create The Perfect Milk Splash In The Studio

How To: Create Dynamic Water Splash Images
« Can You Spot The Lego Elements?
7 Photographers – Each Take A Different Angle On The Same Light Modifier »