A few weeks back a viral video was circulating the web showing a horned New Zealander ram dueling with a motorcyclist Marty Todd. The flick went viral and was shown on CNN, CBS and many more new outlets. 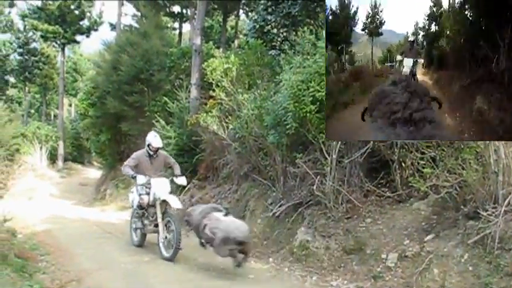 However, all the coverage was pretty one sided only showing the action from the motorcyclist point of view.

In an act which I am not sure if to call heroic or plain stupid, Todd returned to the same spot, found the same ram and mounted a GoPro camera on the animal’s back using a Velcro strap. The footage captured show the action from the ram’s point of view.

Here is the original movie with the same go pro mounted as a helmet cam.

P.S. – On a copmletly differnt mood, a Camera Strapped To Eagle shows a magestic and peaceful view of The Glorious French Mountains.

« How to Write a Better Photography Bio
Portraits Of Severe Face Injuries Made With Cake, Candy & Ice Cream »