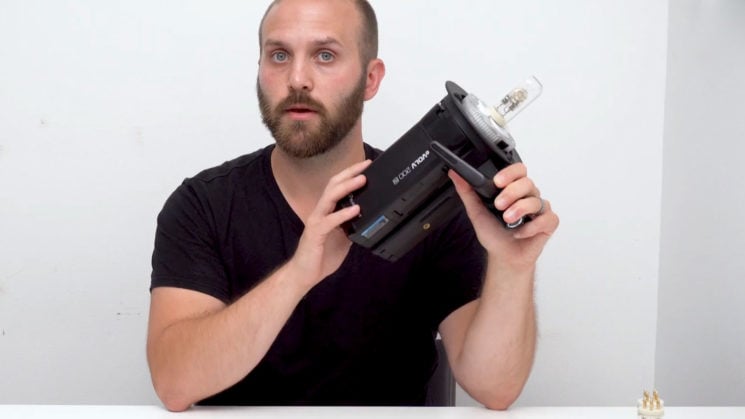 The Godox AD-B2 has been dreamt of ever since the AD200 was announced a few months ago. It wasn’t much of a stretch to assume Godox would release something like this given the H1200B extension head. The head lets you plug in a pair of AD600 lights to get 1200Ws of power. The AD-B2 essentially does the same thing for the AD200, letting you double up the power.

According to this review from photographer Rob Hall, though, not quite. When one compares a single AD200 in the standard S-Fit adapter to a pair of AD200 in the AD-B2, one expects there to be a stop of difference (double the power). Robert’s observations yield quite a substantial increase over that. And it’s all down to a very simple difference in design.

When you watch the whole video, it doesn’t seem make sense. Even a single AD200 connected to the AD-B2 puts out more light than the AD200 on its own? How is that even possible? Rob tested with both one and two AD200 units and bulbs. For each test, Rob used either the S-Fit bracket or the AD-B2 using a 7″ reflector. And these are the meter readings.

Looking at the AD200 in the S-Fit bracket vs 1 AD200 on the AD-B2 head, we see a 1/3rd of a stop increase in power. The AD-B2 isn’t actually giving you more power than the lights are capable of producing. That would just be impossible. But what it is doing is directing the light more efficiently than the standard S-Fit bracket.

Interestingly, a few days before Rob posted this video, another friend, Ian Pack, came to me with an experiment he was performing. He’d had this idea that the Godox S-Fit bracket wasn’t really optimally designed. I’d noticed this myself when comparing output with a meter between my AD360II and the AD600.

But Ian wanted to put it to the test. His plan was to insert a reflector behind the bulb to fill in the black hole through which light was escaping.

You can read Ian’s complete article here, but his observations with the reflector seem to match up with Rob’s using the AD-B2. Ian actually noticed a power increase of up to 2/3rds of a stop.

What’s very cool about Rob’s experiment with the AD-B2, though, is that a pair of AD200 units with a pair of AD200 bulbs comes pretty close to matching the AD600 in power. Not too far off, at all.

As Rob has found the AD200 to generally be a more versatile light, he plans to carry the AD-B2 head around with him now instead of the AD600. When he needs more power, he can double them up. When he doesn’t need the power, he has multiple lights.

I wonder if we’ll see a slight redesign of the S-Fit bracket now with findings coming out like these. If not, at least there’s still the little reflector disc, although they’re kinda pricey for what they are.

« Photographer shoots colorful portraits made entirely of food
“If you love what you do, you’ll never work a day in your life.” FALSE. »