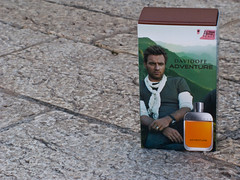 It was this time of the year when my wife decided I need a new scent. It happens every now and then. This is a fundamental difference about the two of us. It takes me so long to get use to a new fragrance that I rarely want to make a switch. Wify, however, want a refreshing hubby twice a year, so fragrance shopping we go.

This year’s winner is Adventure By Davidoff. Not sure she liked the fragrance as much as she liked the fact that Ewan McGregor was on the cover sleeve of the box.

Good thing he was too. He reminded me of an exercise we used to do on my photo club. (Really, you don’t have to do it with Ewan McGregor, but it adds so much more fun to the exercise that you really don’t want any other model).

As you may have guessed from the title of this post this exercise is all about framing.

You will need a camera, and a cardboard box. Ewan McGregor is optional, but hard to resist. 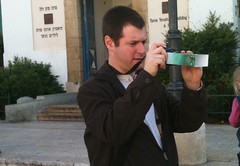 Here is the general idea: for an entire day you should walk around taking pictures with a box around your lens (see the image on left).

When you put the box around your lens, you’ll see that it frames your image. Cool! So now, every image that you take will have a “built in” frame right out of the box.

The fact that you have a frame when you are taking the picture should help you focus on your framing. 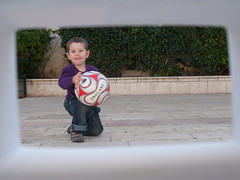 No you can’t. When you follow this exercise you will learn soon enough that the images that you take have to be perfectly framed when you take them.

The fact that the frame is part of the picture takes out the trivial option of cropping in Photoshop. You have to do it out of the camera. If you crop in PS you will have to remove the cardboard frame.

Framing Tips For This Exercise 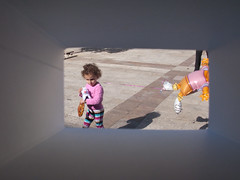 This should go without saying, but I am going to say it anyway, Look at all four sides of the frame before clicking. And by four I mean Up, Down, Left and Right. It takes less than a second and you’ll remove those half-peoples from the frame.

All the usual rules of thumb still apply, thirds, Triangles, leading the eye. Only you have to really pay attention to them as you are taking the picture.

The frame is smaller when you are putting an Ewan McGregor on your lens, try and keep your composition simple. The box alone is one “trick”. Think before you add another.

But I Did Not Get Any Perfume Lately

This is not an issue, you can use cereal boxes, match boxes (for some point and shoots), that small box of that thing you bought yesterday. Any box.

If you followed this exercise and found it useful, post the image to DIYP Flickr pool, along with a link to this post, and any lessons you discovered. Tag you image diypframed and it will show on the show below.

PS. If you love boxes, you may want to check out this post about boxes hacks and photography.