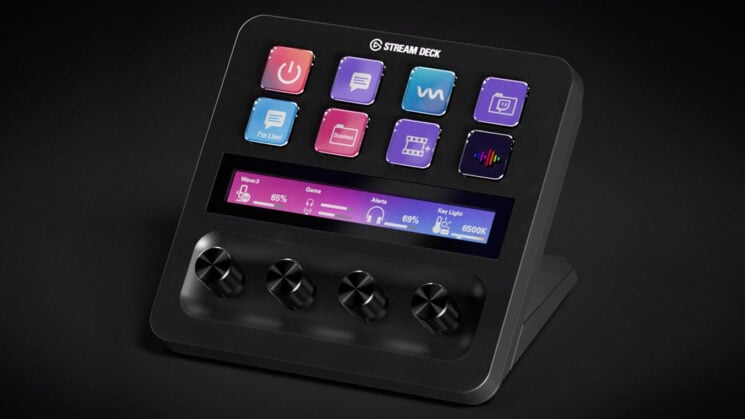 Popular streaming gear manufacturer, Elgato, has announced the new Stream Deck +. Like the original Stream Deck and its many variants, and as the name suggests, it’s aimed primarily at streamers, but it features abilities far beyond those needed to play your favourite game on Twitch. And now, for the first time, a Stream Deck device gets a bunch of knobs you can press and spin around for precise adjustment control.

For gamers, these knobs let you adjust things like the volume of your game vs your microphone vs your overall headphone loudness. But for people like us, using applications such as Photoshop, Premiere Pro and DaVinci Resolve, these can offer fine control during the editing process for things like hue, saturation and brightness for colour grading, zoom or frame advance for video editing.

The new Stream Deck + does lose some of its familiar buttons in order to make room for the knobs, bringing the standard button count down to only eight. But you can still have up to 10 pages of console layouts with apparently limitless nested folders of buttons. You just won’t have as many options instantly available at your fingertips and might have to go hunting for a little while to find some of them. You also get a new slender wide touchscreen display directly above the knobs.

The Stream Deck + can be easily customised using the Stream Deck app, allowing you to drag and drop different commands and controls into each of your layouts and folders. It utilises Smart Profiles which automatically detect what software you’re using and the device instantly switches over to the appropriate set of buttons as you move between apps.

It has a wide range of compatibility with different software, so you can use it for pretty much whatever software you wish, like maybe Photoshop, Lightroom, Premiere Pro or DaVinci Resolve. Such desktop consoles can be extremely valuable in a photo, video or audio editing workflow. And while they don’t really provide you with much that you can’t access via shortcut keys or menus, the time they save on repetitive tasks adds up a lot over the course of a day, week, month or year. If you’re a business – or just value your time – they pay for themselves in no time at all.

This is probably the first Stream Deck device I’ve seen from Elgato that actually looks like it caters specifically to the needs of an audience outside of gamers while still satisfying gamer needs. Is it a Loupedeck CT? Well, no, not really, but it also comes with a significantly lower price tag of $199 vs the Loupedeck CT’s $549. It’s even cheaper – albeit still with fewer buttons and knobs – than the Loupedeck Live at $269.

If you really want to save absolutely every penny you can while still getting some of that functionality and versatility of a console with buttons and knobs, it might be the ideal solution. Although, personally, you’ll pry my Loupedeck CT from my cold dead hands!

Elgato Stream Deck Plus or Loupedeck Live? Which would you go for?

The Elgato Stream Deck + is available to buy now for $199 from the Elgato website. It should be coming to the usual places soon.

Sony crop mode – does this mean I need fewer lenses?