Here is a great tool to add to your lighting toolbox, controlling lights with gels. It’s not about making the light hard or soft, it’s different of control, one that allows playing with color relations. And While there is quite a bit you can do with gels in general, today I am going to focus on controlling backdrop color.

There is a way to get three looks using only two lights and a gray backdrop. If we take this concept and expand it, we can use gels to control the background. We can actually mimic quite an infinite number of backdrops. Instead of using two studio strobes like I did in the last tutorial, for this lesson I’m going to be using three speedlights. The reason I wanted to use speedlights rather than studio strobes is because I got a handful of questions about whether or not the 3 in1 headshot could be done with more basic gear. In order to lay those concerns to rest I wanted to get back to basics and use some of the least expensive gear on the market to prove that you can get some great images with very inexpensive gear.

Now that I’ve gone over the basic gear, let’s get started. Here’s the process in a nutshell.

And here is a step by step that you can follow

Ok so maybe it’s not that simple, but it really isn’t all that difficult either.

The first thing you’ll want to do is setup your background lights. It’s also important that you use a gray background (which I failed to mention in the above video) because that will translate the color from the gels better than any other background. You can probably get away with using white, but in my experience, I have always had better results with gray. When I am adding color to my background I prefer to use two lights rather than just one because with two flashes I am able to control the color much better than I would be able to with just one flash. That being said, you can definitely use just one flash if that’s all you have but I have found that I get a much more consistent color across the entire frame if I have two lights angled in toward the background at about 45º.

Once you have your background lights placed where you want them, go ahead and take a test shot without your key light on. Depending on where you have placed your subject you might get some pretty bad color bleed onto the side of your subjects face. 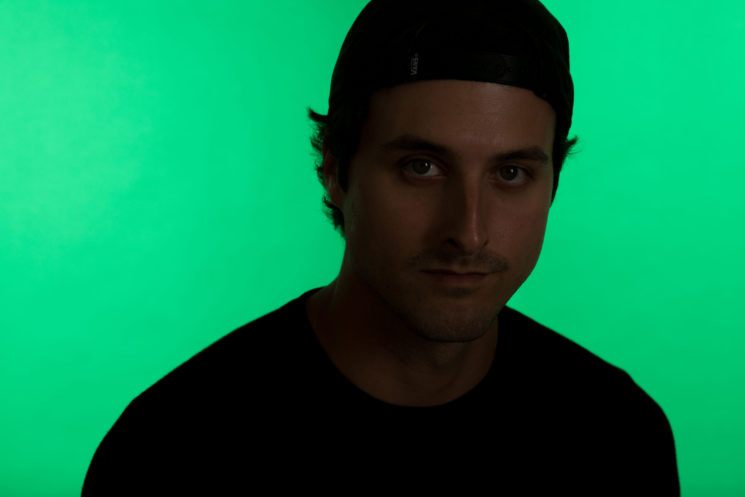 There isn’t too much bleed in this image, but if you run into that problem, here is how you eliminate it. You can either bring your subject forward so the light doesn’t fall on their face anymore, or you can flag the light with a piece of black foam core. I chose to use the foam core because I will actually use it for something else a little bit later. 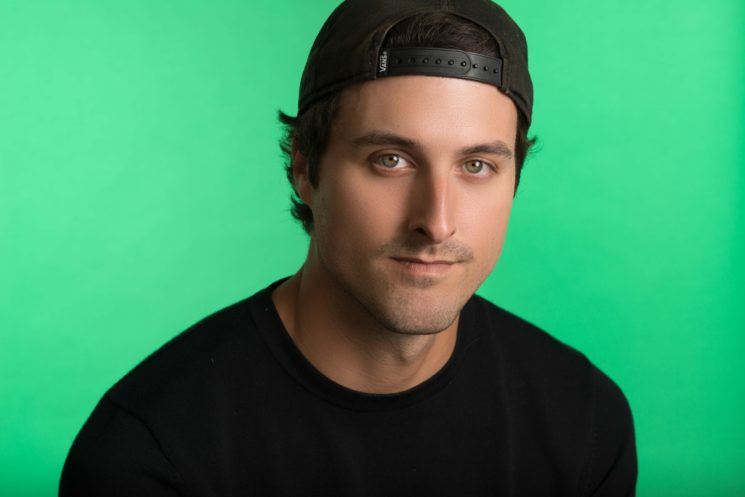 To get my flags in the correct spot, I just clamped each piece of foam core to an extra light stand and made sure to place them in-between my background lights and my subject. When I’m shooting with just one color on my background I like to point my flags at the opposite edge of the background. 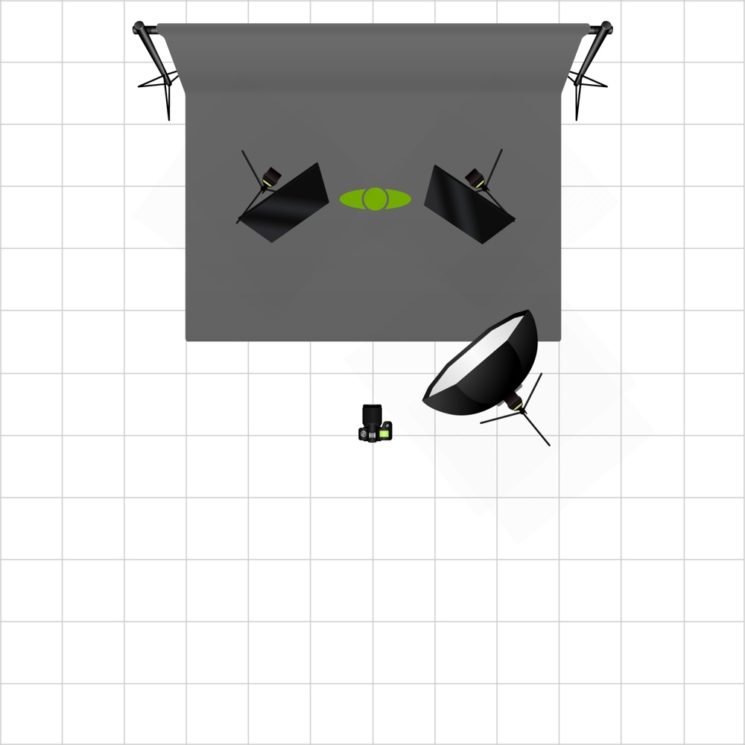 This ensures that I get consistent color all the way across the background. If you don’t feather the flag all the way to the edge, you’ll end up getting a line through your background that looks really bad. 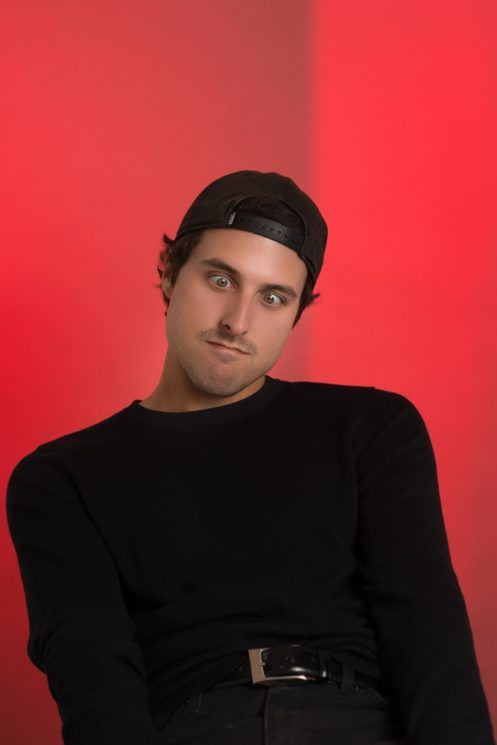 Now that the flags and lights are properly placed, you can get to shooting. Another thing to keep in mind is that the power of your flash will also alter the color of the background. In the first example, my background lights were both set to 1/2 power which makes the background a vivid red. 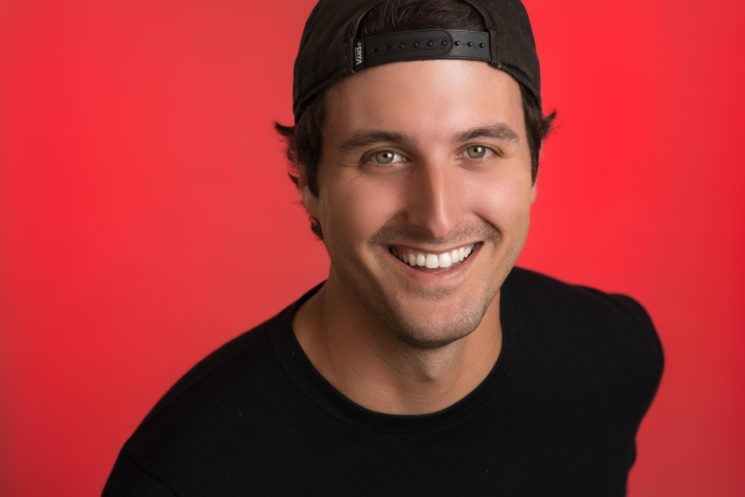 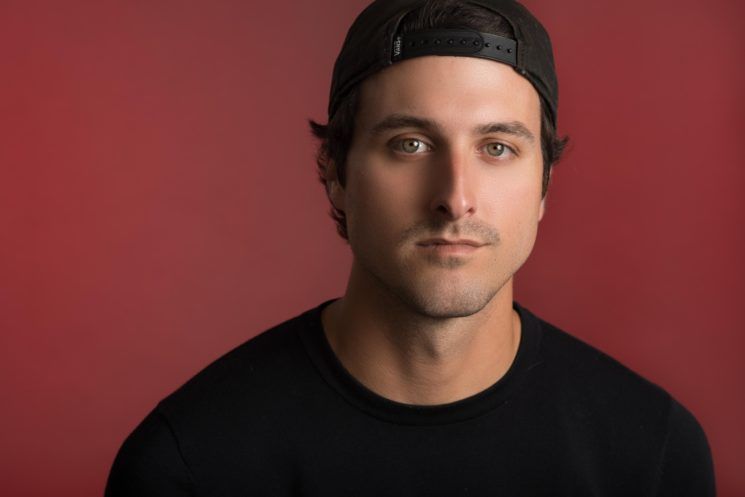 The really cool thing about using gels to add color to your background, rather than using multiple colored backdrops is that once you setup your lights, you can just change out the gel to completely change your background in a matter of seconds.

In addition to creating solid colored backgrounds, one of my favorite ways to use gels on my background is to actually split it into two different colors. To achieve this, all you have to do is feather your flags back toward the middle of the backdrop. In some cases, you may have to have your flag almost pointed directly at the backdrop at 90º. 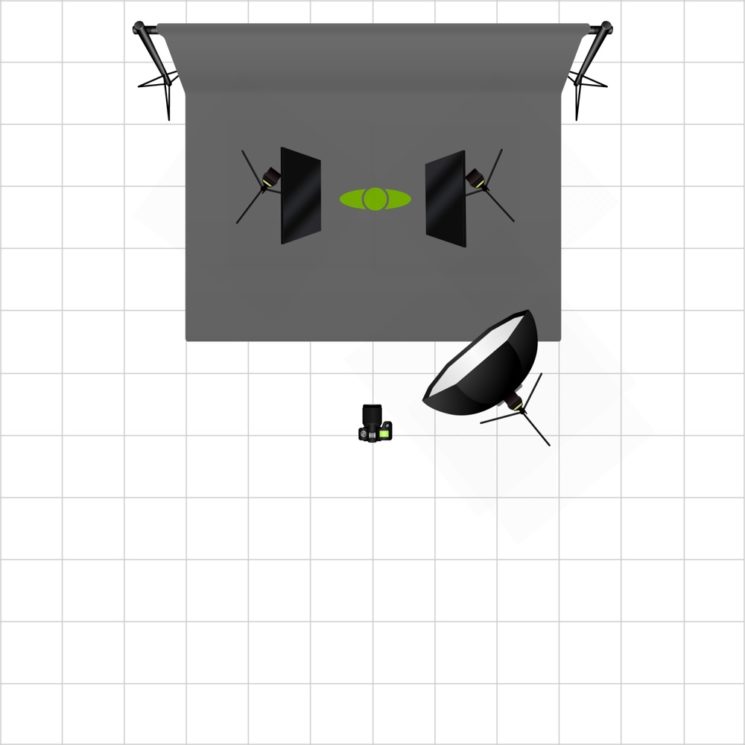 To properly dial in the placement of the flags, I found that it’s easiest to do one light at a time. I started with the flash to camera right, which in this case was red, and I turned off the light to camera left.  You’ll see that the background on the right side is lit up with read while the left side of the frame has fallen to a dark gray.  This is a really great example of how much control you can have over your light just by using a piece of foam core as a flag. I have to admit, even as a test shot this image looks pretty cool. 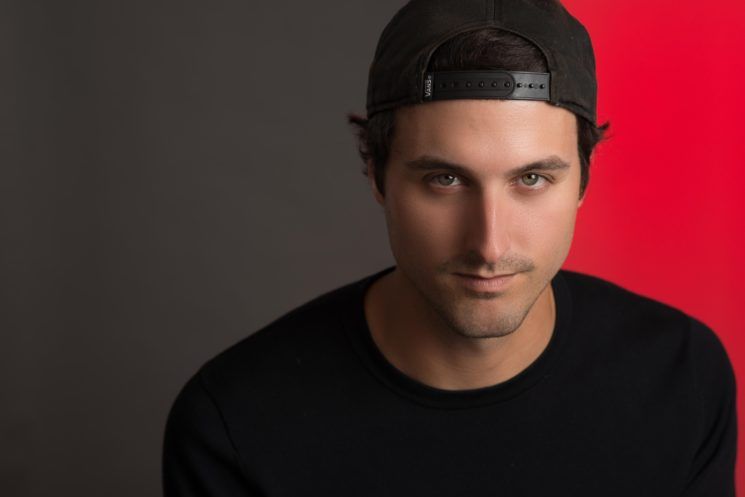 Now to find the placement of the other flag we repeat the same process, only this time we’ll turn the left light on and turn off the light to the right. This will create the same effect as before only reversed. 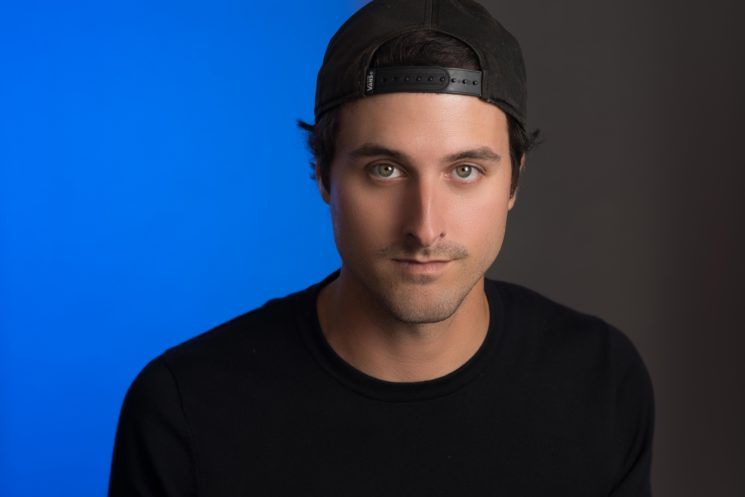 With both flags in their appropriate position, you can go ahead and turn on both lights to get a two toned split background. 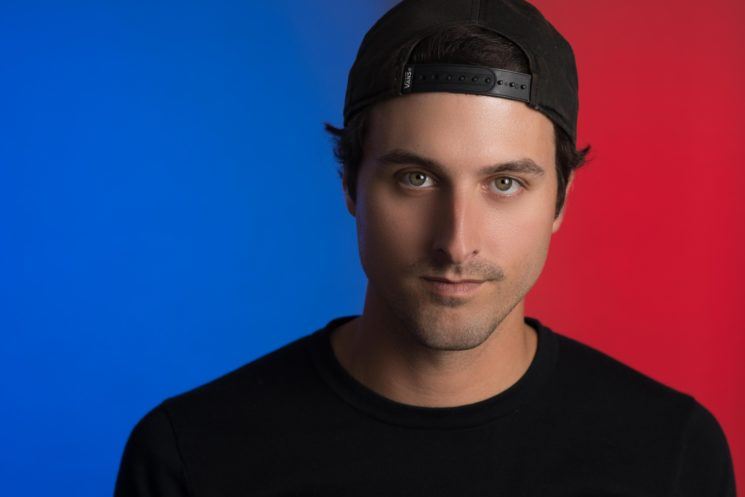 To take it one step further, you can also have one side of the background white while the other is lit with color.  You can achieve that look by removing one of the gels and increasing the power of that flash to bring the background to white. 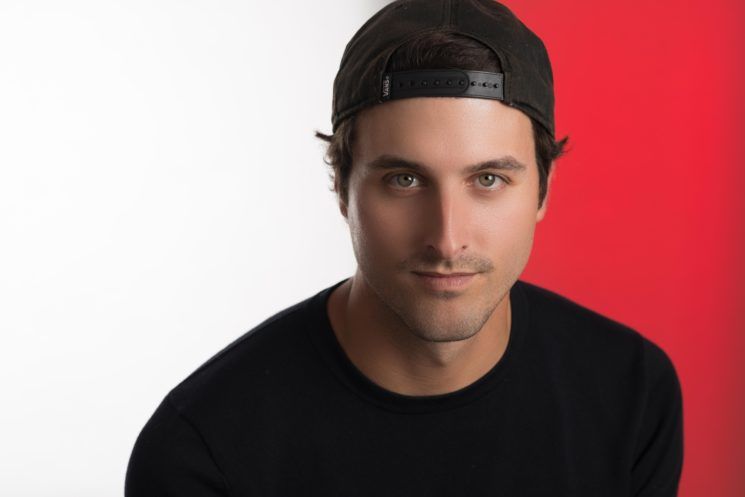 With these tips hopefully, you can have some fun at your next studio session. I know I had a blast creating these images and playing around with different colors. Feel free to share your images you produce in the comments section below and if you have any questions don’t hesitate to ask!

I’ll leave you with a couple more images from this session. 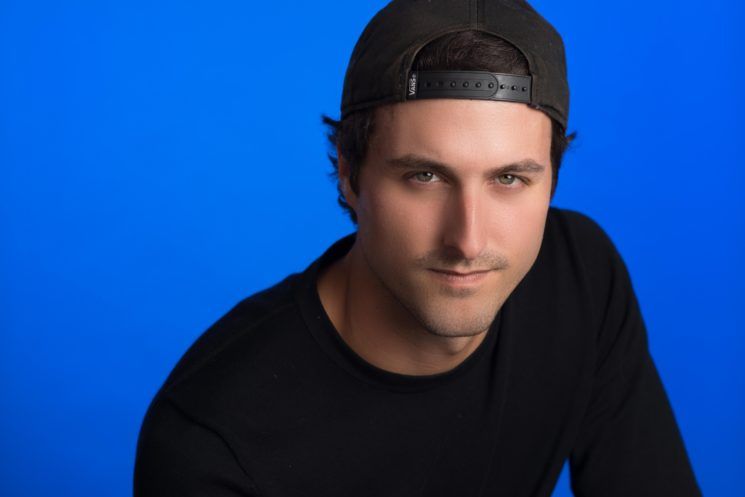 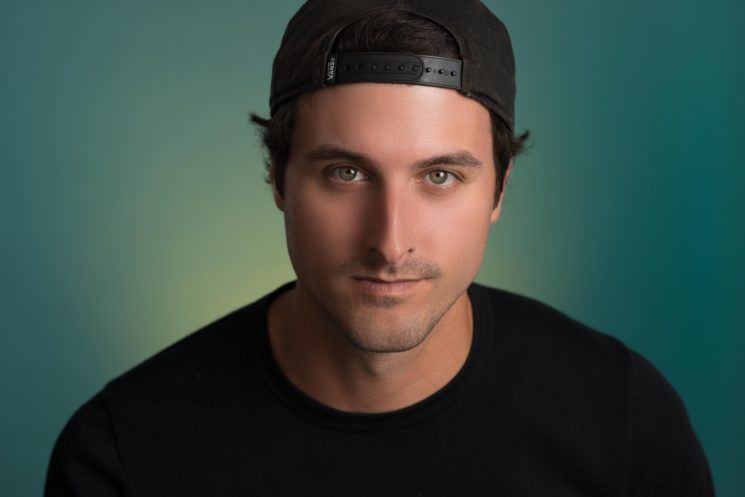 Jeff Carpenter is a portrait and lifestyle photographer based out of Nashville, TN. He has a formal education in audio production but fell in love with the visual arts after taking a mandatory photography class in his last semester in college. The rest is history! you see more of his work over at Readylight Media, and connect on Facebook, Instagram, Twitter, and g+. This article was also published here and shared with permission.