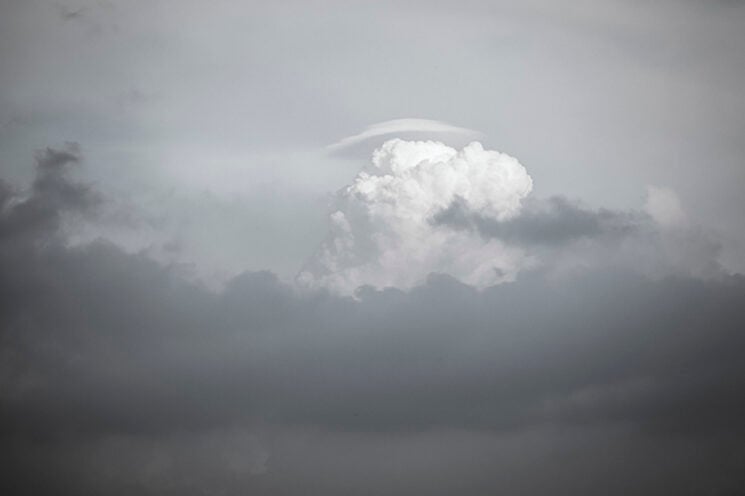 Personal photography projects combine both reflection and exploration. Often photographers will find an area or subject they are connected to and use this medium to understand and represent it. For Mexico City-based Annick Donkers, her photobook Un-Identified both retells a formative experience witnessing a UFO while connecting with others who shared similar alien encounters. Through portraiture, astral imagery, and heavy research into the mysterious world of theories, she provides a safe space for these personal stories to be received, as they help expand upon the many questions of humanity’s place in the universe.

Annick grew up in Flanders, Belgium, where she spent many nights as a child stargazing outside her home. One night she witnessed a strange astral phenomenon and was captivated by what her own two eyes could not explain.

I was 10 years old walking back home with my mom on a cold December night, when I saw one star moving northwards in our direction. When we arrived at the house, we saw how this star had turned into an oval metallic shape, with lights around and no sound at all.

A lenticular cloud that looks like a flying saucer in Tepoztlán, a UFO hotspot in Mexico.

Soon after that, Annick’s father gifted her the book Chariots of the Gods by Erich Von Däniken, and she was fascinated by the theories of aliens visiting ancient civilizations. This childhood experience guided Annick’s curiosity and helped her find her way to others with similar beliefs.

While living in Mexico, I worked a lot around belief after doing a story about Afro-Mexican healers in the state of Guerrero. As I began to consider a new subject, I thought back to the experience I had at 10, so I started to look for people with interesting stories about UFOs and alien encounters. 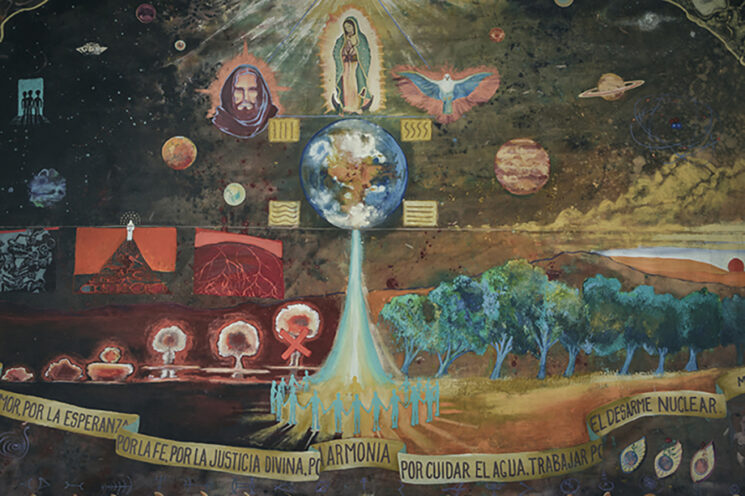 Painting at the house of Miguel Angel, showing the message that was given to him by aliens while he was aboard a spaceship.

Annick sought to create a book with stories from those who believe in aliens, presented without judgment or scrutiny. When she started to research and connect with those in the UFO community, she discovered their reluctance to open up to others for fear of being dismissed or ridiculed, so it became important to Annick that she created her book to have an unbiased voice.

I started my search in 2017, not really knowing what I would encounter… For me it was not a question of “is it true,” it is not a journalistic report, it is about their beliefs and what is true to them. 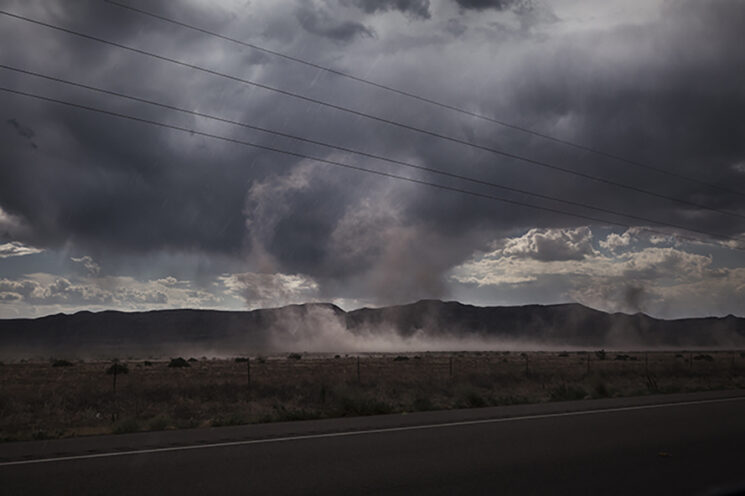 Whirlwind on the road in Texas, somewhere between Van Horn and Marfa. According to Annick’s research, UFOs are believed to be hidden inside whirlwinds.

Once she had a subject in mind, Annick first started her research by attending the UFO Congress in Phoenix, an annual conference that has been inviting people to explore extraterrestrial theories since 1991. She thought that by sharing her own personal story others would in turn talk about their own experiences, but soon found that this close-knit community didn’t immediately welcome her in.

It was as if they were holding a secret and they didn’t want to share it with outsiders. 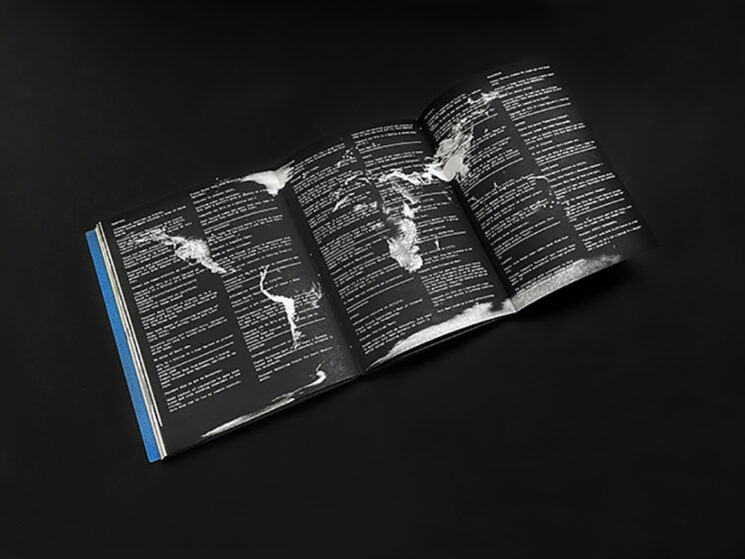 Map of alien bases in the world Annick received from a disclosed source.

The event itself was overwhelming for Annick, as she wove through large crowds alone, unsure of who to approach and how to connect to the others in attendance. The Congress was strict about no photos, making the conference a difficult first choice of research for her photobook. To take in some information from her time among other believers, Annick chose a few guest speakers at random, hoping the discussions would help kickstart her project.

My first time in Phoenix was not a big success, but it was a starting point to dig deeper. When I went back to Mexico, I contacted Jaime Maussan — Mexico’s most famous UFO journalist — and went with his television team to Peña de Bernal in Queretaro where we did a sky watch all night. 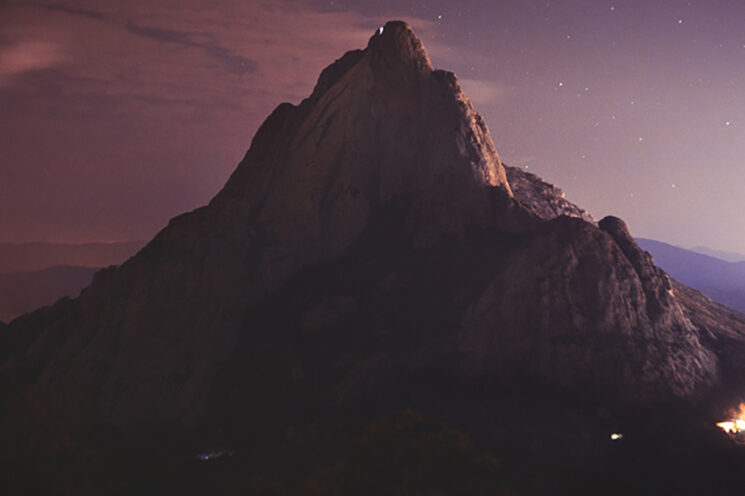 Peña de Bernal, a monolith in the State of Queretaro is a UFO hotspot.

That trip led Annick to meet her first contactee, the owner of the place she stayed with Jaime’s team in Peña de Bernal. He was interested in the project and wanted to speak with her, so Annick returned to interview him one-on-one. 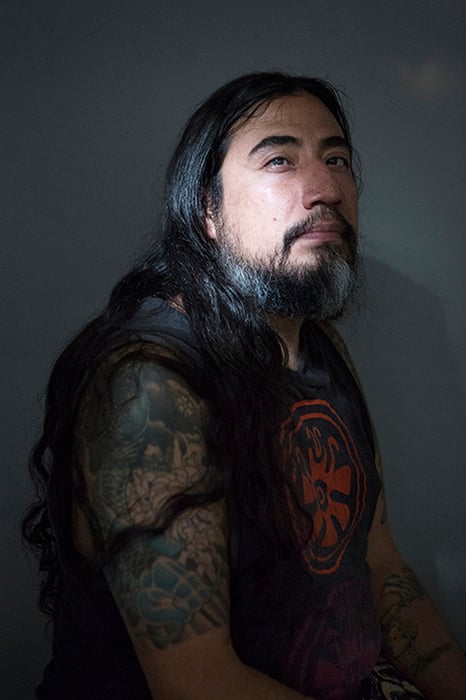 Portrait of the Mexican DJ Asagi Saundo. Asagi believes he is a descendant from Mars, which he discovered during a therapy session. He also had encounters with UFOs and reptilians

In the beginning, I was having problems creating this series since I didn’t know how to visualize these experiences that the reader can’t see. I had a creative block, so I had to distance the project from journalistic images. It was more about suggestion and feeling. 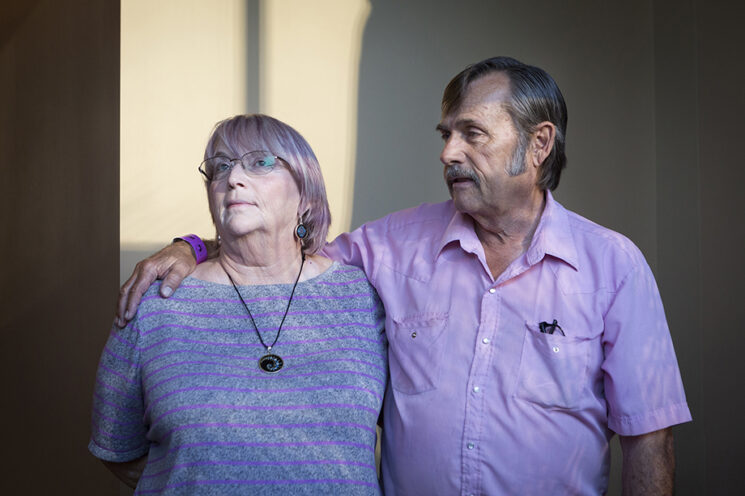 Judy and Stanley had a UFO experience in 1973 in Odessa, Texas. Annick met them at the UFO Festival in Roswell and later at the International UFO Congress in Phoenix.

Annick worked hard to find those who would recount their stories and began recording and transcribing interviews. Each interview included a portrait session so that the individual could be highlighted, while Annick found ways to create eerie and ethereal images that would speak to their extraterrestrial encounters. 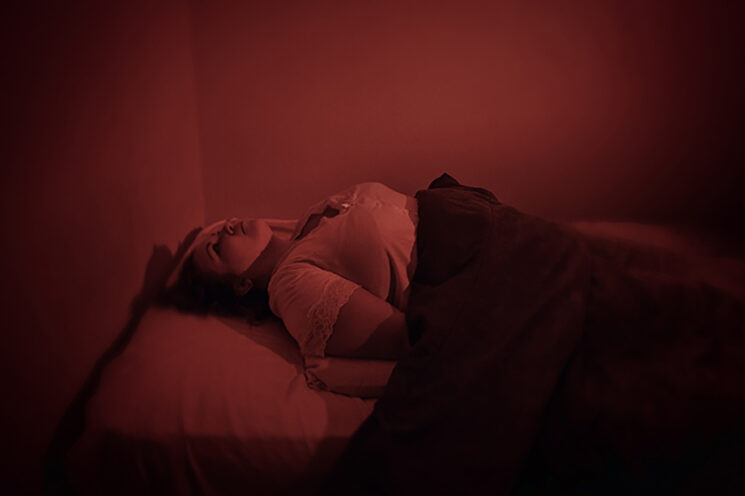 Jessica’s abduction experience at her house in Mexico City. She told me her room was filled with red light when grey aliens visited her.

While she found a diverse array of subjects to represent the variety of people who have shared in this unique occurrence, Annick discovered many parallels and overlapping experiences that ground these otherworldly experiences here on earth.

During the interviews I realized that believers talked about the same themes and they connect things in order to create their own understanding of the universe. I found this interesting and wanted to create a map with these themes and connect the stories visually. The design was done by Chinese artist Vera Yijun Zhou.

When I was digging into the conspiracy world, I sometimes had to withdraw, because it was overwhelming and you really start doubting everything. I used all this information to create the map, which is how I observe the world of the believers, and their world is dominated by conspiracy. 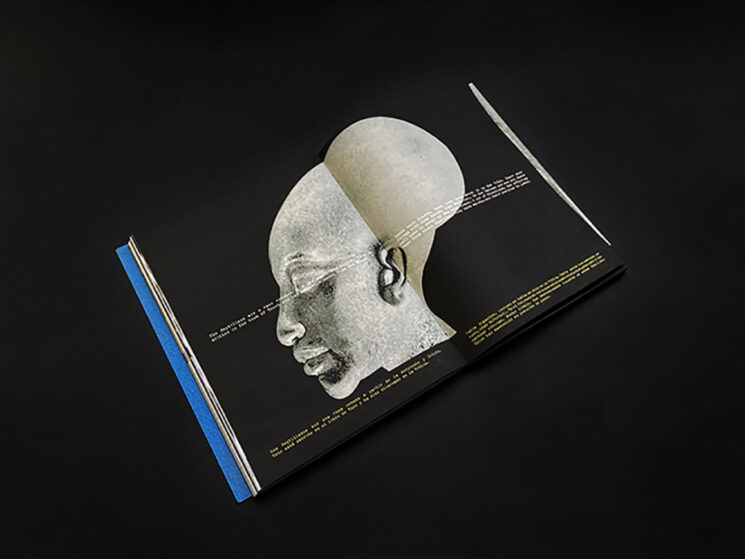 A chapter in Un-Identified about conspiracy theories. In the picture: Nefertiti is represented as a “conehead”, an alien lineage.

More connections came about after Annick reached out to the director of MUFON (Mutual UFO Network), an organization dedicated to investigating UFO reports around the globe.

He helped my research in Mexico because it was important to have contacts inside the community. After two years of research and interviews, I went back to the UFO Congress in Phoenix and felt that people opened up more this time around. 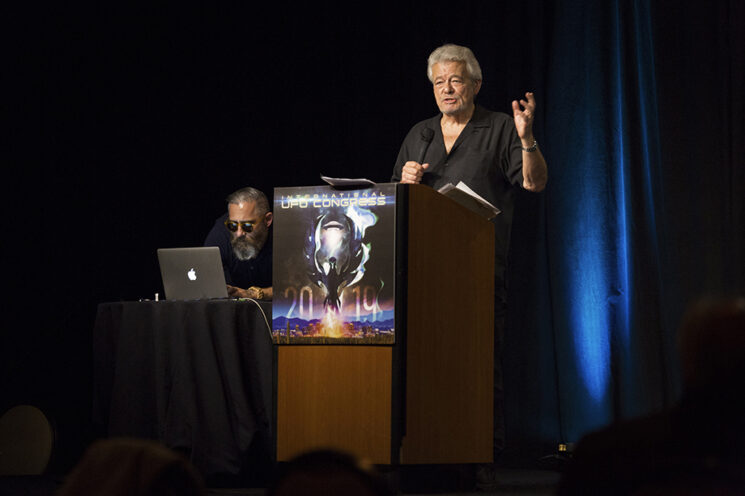 Annick returned to the UFO Congress in 2019 and photographed many of the speakers and even other attendees. Her time and dedication to this project granted her access to a community that often sees its stories exploited or humiliated, instead of appreciated and revered. 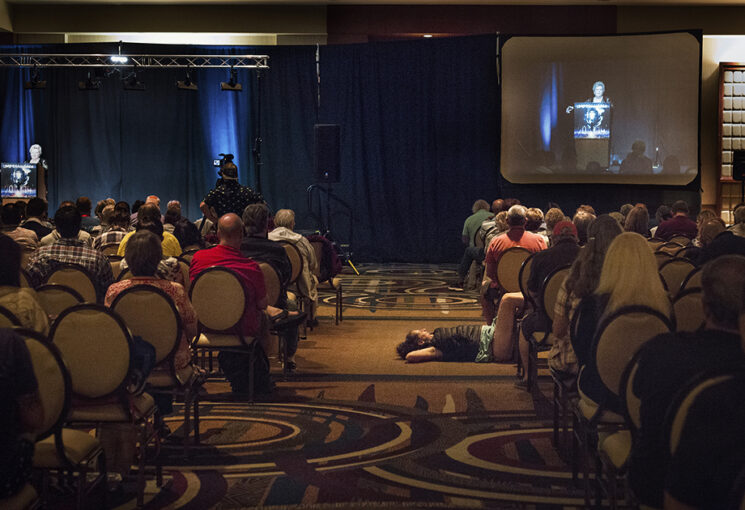 Attendee lays in the middle of the floor during a speaking event at the 2019 UFO Congress in Phoenix.

As the project unfolded, Annick began to understand that most individuals are looking for like-minded people, who want to belong to a community. And when that community is grounded in belief, it can become a place of comfort, reflection, and understanding, as we try to make sense of our existence.

For many, the UFO community is a kind of new religion, an anchor in times where the outside world is confusing and aggressive. 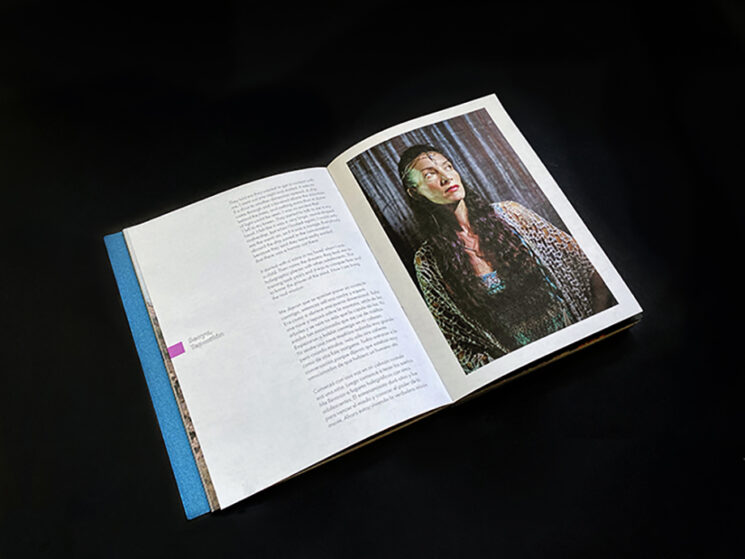 A page from Annick’s photobook featuring Senya, a German-Algerian contactee and QHTT therapist at her house in Tepoztlán, Mexico.

Annick’s book was created in collaboration with Hydra — an independent photography space in Mexico City — when she was selected for “Incubadora de fotolibro,” a program where she worked with different international editors and specialists to create her own photobook.

Finishing a photobook in covid times was quite a challenge and the publication had been postponed, but my book is finally on pre-sale via the Hydra platform.

Liz Wolf is a writer with a particular passion about communication, creativity, and collaboration. She is currently a Managing Editor and Content Strategist at Wonderful Machine. You can connect with Liz via LinkedIn and learn more about her on her website. This article was originally published on Wonderful Machine and was shared with permission.