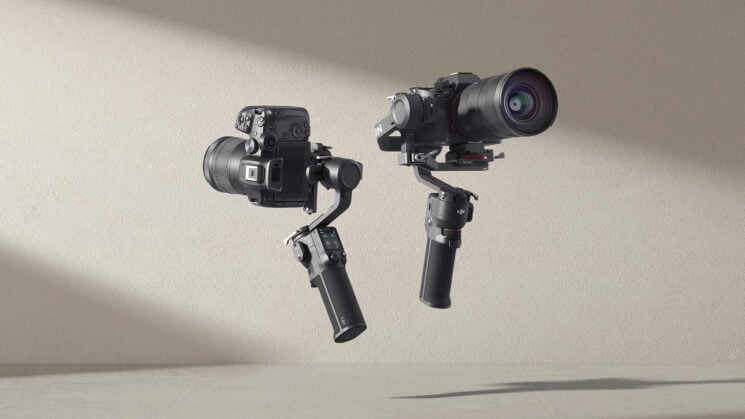 DJI has announced their newest gimbal, the DJI RS 3 Mini, a small, lightweight handheld gimbal designed for travel use. DJI says that the RS 3 Mini “continues the excellent stabilization performance of the RS 3 series, allowing users to create professional-grade content while travelling around landscapes or in urban locations”. With a weight of less than 800g, it’s significantly lighter than the RS 3’s 1.3kg or the RS 3 Pro’s 1.5kg.

Despite being lighter weight, the DJI RS 3 Mini can still carry a payload of up to 2kg and features Bluetooth shutter control with DJI’s 3rd-generation stabilisation algorithms. It also offers easy switching between horizontal and vertical formats, depending on whether you’re shooting for YouTube vs TikTok and sports a 1.4″ colour touchscreen display.

The DJI RS 3 Mini fills the same sort of gap in the market as the Zhiyun Crane M2s and Zhiyun Crane M3. There is a little difference, though. While the Crane M3 offers a maximum payload about the same as the RS 3 Mini, its minimum payload is quite a bit lower. The DJI RS 3 Mini bottoms out at 400g, which allows for some pretty compact cameras and lens combos. But, if you were hoping to occasionally be able to use it with your smartphone or action camera, you’re probably going to need to add some extra weight on there for the motors to kick in. With the two mentioned gimbals from Zhiyun, you don’t.

But, if you’re only ever going to be using it with mirrorless cameras and don’t need to throw any super long heavy lenses on there – which you probably won’t if you’re travelling – then the DJI RS 3 Mini looks pretty good. It supports everything up to cameras like the Sony FX3, Nikon Z7 II and Canon EOS R5, so it can handle some pretty hefty rigs. If you want to see the full compatibility list, have a look here. As far as a physical size comparison, here’s how it looks next to the DJI RS 3 and the DJI RS 3 Pro. 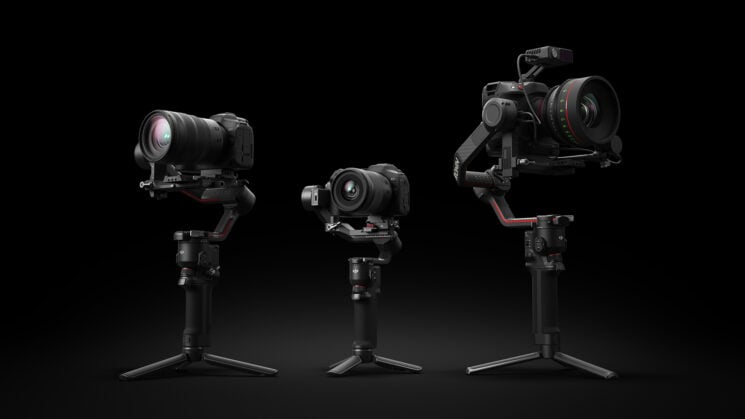 It contains a 2450mAh 7.2v battery which gives you around 10 hours of runtime on a full charge. This is obviously dependent on you being able to balance the gimbal correctly and the more active you get with it, the more that battery life will ultimately decrease. But, it charges up in only 2.5 hours using a standard 5v 2A charger, so if you top it up between uses in your backpack from a power bank, it should keep going all day just fine.

You get a full 360° of continuous rotation in the pan axis, the roll axis goes from -95° up to 240°, and the tilt angle goes from -10° to 210°. This gives it a lot of range of movement and offers maximum versatility regardless of whether you’re shooting horizontally or vertically. Unlike some gimbals, however, that allow you to switch between horizontal and vertical at the press of a button, the DJI RS 3 Mini actually has a removable bracket, making the gimbal lighter when shooting vertically rather than horizontally.

The mounting plate uses the standard Arca Swiss format, allowing you to switch easily between the gimbal and a tripod. A small NATO rail on the side of the handle also allows for attachments such as fill lights, monitors, or a sling mode handle. Underneath, there’s a 1/4-20″ socket for mounting it onto the mini tripod included with the DJI RS 3 Mini or to other support systems like tripods and sliders.

It’s nice to see DJI finally producing something smaller than their main camera gimbal product lines but larger than their dedicated smartphone gimbals that makes life a little easier for travel shooters. Will you be adding the DJI RS 3 Mini to your collection for travelling?

The DJI RS 3 Mini is available to buy now for $369 and is already in stock and shipping from retailers.