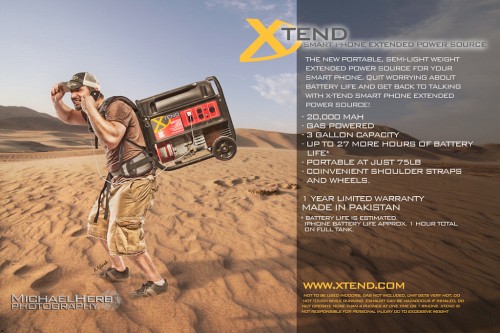 If you are an iPhone user like me, you must hate the way the battery drains after about 3 hours of use. Michael Herb came up with a super cool way to keep your iPhone charged at all times. The Xtend portable generator.

OK, you got me, the Xtend does not really exist in real life (though it would be such a cool DIY project). But not all is lost. Instead of charging your cell, you can have a behind the scenes look on how this photograph was created. Michael was kind enough to walk DIYP readers through his workflow of creating this image.

It may be hard to believe but using some image magic, the photograph was taken using a small bath and a bed sheet. (You can watch the entire process on video at the end)

It’s all Michel from now on…“A quick note about capturing this image. I shoot in RAW and convert using Lightroom 3.0. I then import into photoshop and work in the TIFF format. I use the Wacom Intuos 3 Tablet for all editing. “ 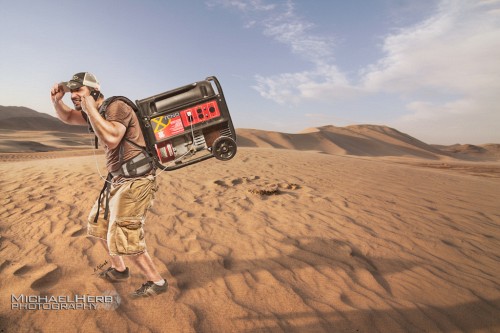 This idea was born from nearly every smart phone owners complaint of less than stellar battery life. I’ve seen extended batteries and they all look cumbersome and bulky. So, why not have one that makes all the rest look dainty and petite. And thus was born the idea for Day 218/365

My brother actually modified the idea to have me wearing it. I was originally going to be dragging it down the street. This idea took it to the next level and really got me excited for it.

My first problem was how to get the 70+ pound generator with a full tank of gas up high enough to photograph it without harsh shadows underneath. Solution: set it up on something. Easy enough right? Well, finding something large enough and strong enough was a challenge. I eventually found the old tub that you see in the picture. It wasn’t the strongest but it seemed to hold. 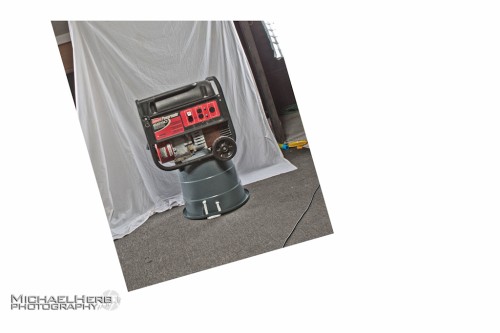 I photographed this at the exact same angle as I would photograph myself. I did this by simply putting the camera on a tripod and not moving it!

I knew that I’d be painting in a phone cord later so I opted to just have the plug in the outlet with no cord attached.

I then photographed myself against the white bed sheet and with my camera bag on. The shoulder and waist straps were large enough to be believable. I had my brother Shawn hold down on the back of the bag to give the illusion of weight. 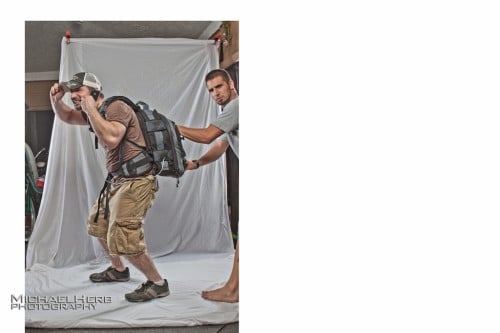 Post production was not all that difficult, just time consuming.

The key to masking it to use the correct brush and softness in the correct areas. Hair requires a softer brush then skin and clothing can be harder than the skin brush. Hair is the hardest part to mask especially on woman. I mask out around women’s hair roughly then paint hair back in to soften the edges.

I wore a hat in this picture on purpose because I’m letting my hair grow out and its at that awkward stage. 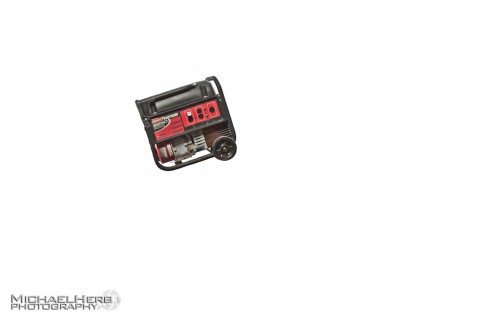 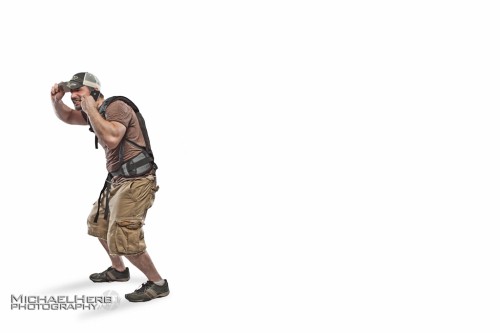 From this point I wanted to drop in the background to give me a better idea of what I was working with. I found an image I had shot while in the dessert on Day 77. This seemed to be perfect as with this baby you could talk from one end to the other! You might not last that long but your phone sure would! 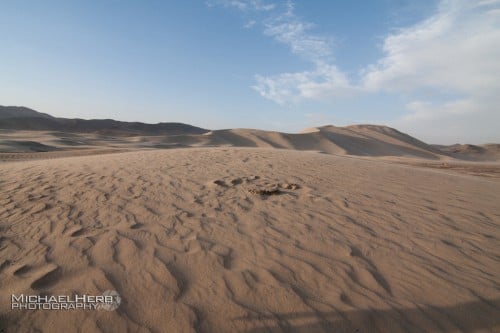 The first order of business was assuring that I looked “planted” Since I would naturally sink into the sand while walking I decided to cover my feet with a bit of sand. I used a sample from the background and brought the layer up above the layer with me. I then feathered the edges and adjusted the coloring to match perfectly. 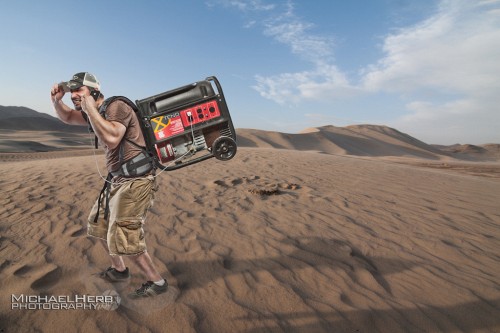 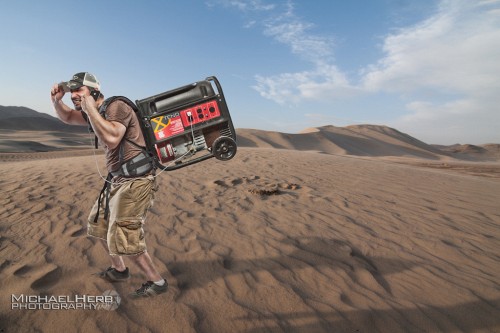 I further erased to show a little more of my shoe to give that perfect look.

From here I went back to working on small details.

Painting the phone cord in was as simple as using the pen tool and creating a waving medium grey line. I had erased the existing phone cord I had coming from the phone to where it crossed my body. I figured I have the cord in camera as to give me an accurate idea of lighting and placement. I painted over it with my fake cord.

To give it a 3d look I simply used a bevel and emboss layer style and played with the settings until happy.

I finish the cord off by painting shadows where they’d naturally fall like right under my face. 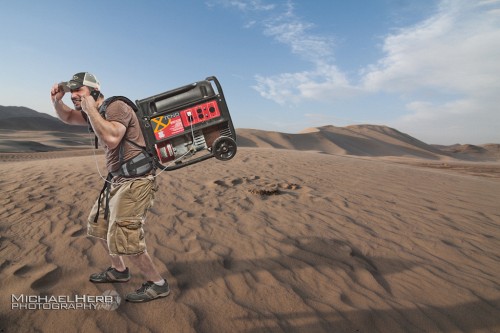 From here I wanted to further plant myself in the environment and nothing does that better than accurate shadows. I knew my main light was the sun coming from camera left. It was low in the sky and would give a long shadow. I flattened a copy of myself and the generator and with a combination of perspective, skew, distort and free transform I make it into my shadow. I turned it black and lowered the opacity to match the existing shadow already in the scene. A shadow which so happens to be my lovely travel companion and knowledgeable assistant Joyce. 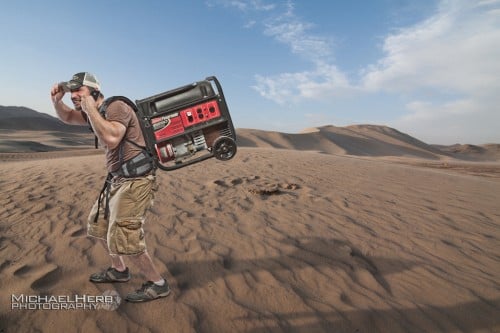 So I’m now firmly planted in the scene yet I look too cold. Truth be told it was freezing that day with 30mph wind it was a truly exfoliating experience! To warm the scene up I added an adjustment layer with a warm orange filter. To further add effect I created a new tan layer, added a monochromatic Gaussian noise filter then added a motion blur filter with a 90º angle. I then added a black mask to this removing it completely from the scene. With a white large and soft brush I painted white over the mask to bring it back in selected areas. Giving a slightly more exaggerated wind blow sand look. 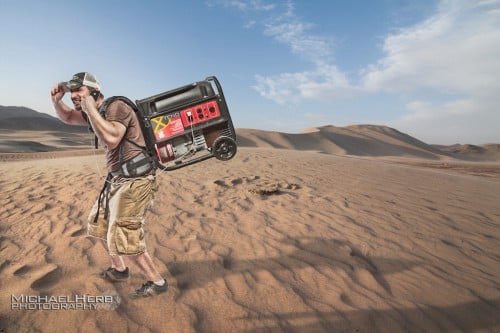 The only other details I added was a replacement label for the generator which falls more in the realm of graphic design.

The key to eye catching and believable composites is attention to detail. Don’t be lazy with any aspect of the image. Stick to reality and you will sell the effect more times than not. Make sure shadows fall where they’re supposed to. Make sure your subjects are firmly planted to the ground if they are in fact on the ground. Match color balance and exposure levels for all elements. Work as if everyone will see it zoomed in at 100% don’t dismiss a detail because your online audience won’t see it.

Hope that helped! Visit my other sites to learn and see more.

An Ode To My Power Supply Unit + Setup Shot

Empower Yourself On Location (Or Two Portable Power Packs)