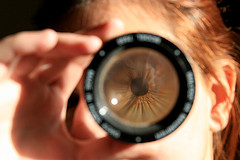 Manufactures of cameras and lenses make their equipment to fall into certain quality control standards.

But sometimes that may not be good enough. This DIY lens aligning setup work great, and is usually a sure improvement over the default setting.

If you need something a tad more pro, there is a pre-made accessory you can buy called LensAlign MKII.

First make a focusing board, the idea here is to make multiple points to focus on, so you can use different lenses at different focal lengths without having to make different sizes focusing boards. This was made in photoshop using a ton of guides and grids so it all aligns nicely. (Click for high res template download) 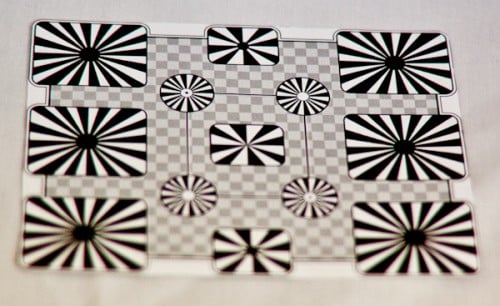 Next create a focus ruler. In photoshop, start with a 5px high box (width doesnt matter). Keep duplicating the height until it takes half of an 8.5 x 11 sheet of paper.

You will now use the cereal box!

First, trace the cutouts onto the cardboard cereal box. Make sure they don’t hit any of the creases on the box. Add about a quarter of an inch on each side of the focusing board. Keep the focus ruler cardboard the same size as the cut out.

Tape the focusing ruler to the cardboard back.

The stand for the entire thing has a peculiar form. It is shaped to allow mounting of the focusing ruler and to allow it to slide the center to different planes. 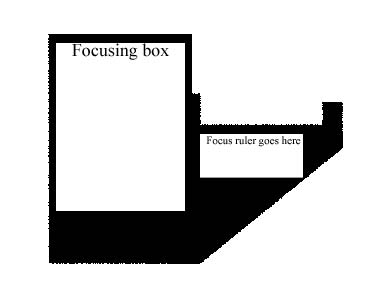 You would need to add some support on the back to give the stand some sturdiness. The easiest way to do so is by cutting a few strips of cardboard and taping them as triangles on the back.

Make one big triangle that is aligned with the bottom to allow the box to free-stand. 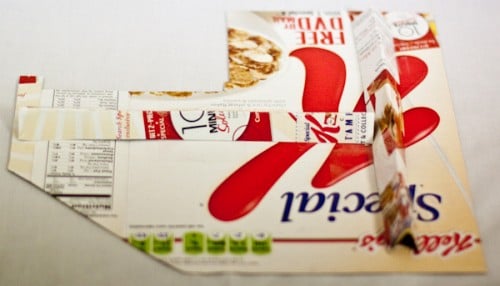 Notice the big triangle is not on the picture. It will be added later, after covering the entire thing with black tape. That way it could be removable so the whole thing could collapse.

Now, cover the stand with black tape. Then mount the focusing board and the focus ruler on to the stand. The Tricky part is to get the focus ruler on strait and inline with the focus board. I used to pieces of tape on the back side of the ruler to hold and balance on the cutout for it. Once it is all done it should look like this. 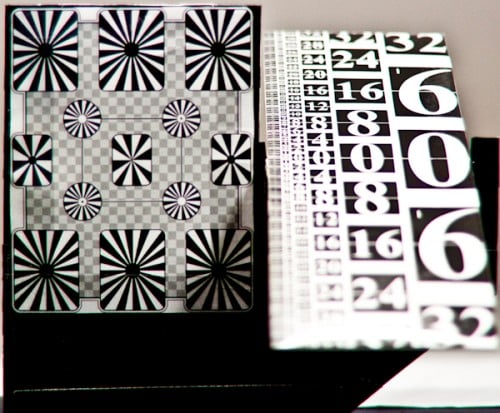 Here is the process I used to calibrate my Canon 50mm f1.4, You can follow the steps to calibrate your lenses.

First, set your aperture to the widest possible opening, f1.4 in my case. This makes sense, since with this wide aperture all but the main focusing point would be blurred.

Next, focus on the middle right box of the focusing board and go from there.

The first picture is the one above and by looking closely you can see that the focus point is on the far side of the zero at the number 8 (anyways, that looks to be the sharpest to me). That needed to be changed so the focus was on the middle of the central zero.

The following procedure applies to Canon, but similar steps can be taken for other cameras. 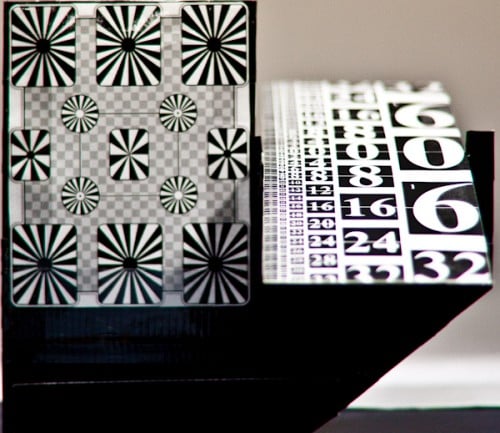 If you look closely you can see that it is focused on the 8 in front of the zero now. I then dialed it down to -3 which its still not quite perfect but it is much better than before.

Rinse and repeat until focus is perfect.

Jason Irons is a photographer based in Aurora Colorado, you can see his work on his site and read his musing on his blog.

Here’s how to use the calibration tool in Lightroom