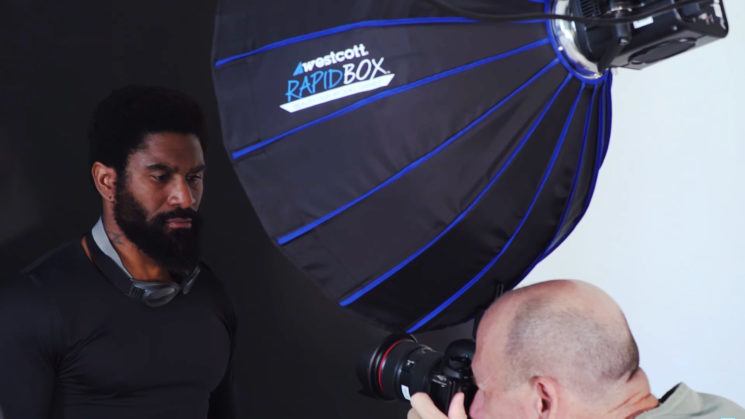 The whole “one light” thing always seems to be a popular topic. And it’s not really surprising. Every day new people are getting into flash. Buying just a single light and learning to master it is the usual recommendation. And it’s a great way to start. The next logical step before buying more lights is to try out a couple of different modifiers. And what better modifier than a beauty dish?

Photographer Joel Grimes likes working with beauty dishes. So much so that he even put his name on one. The Westcott Rapid Box, designed by Joel, isn’t exactly the cheapest beauty dish out there. But, it does illustrate the principles. And while you won’t get the exact same look, you can get pretty close with any similarly sized beauty dish. In this video, Joel shows us how he likes to use it.

Joel highlights two different setups in the video. The first being just one light. Joel talks about the different positions for this light that he perfects, and it basically boils down to two. Either directly to the side, or on axis above the camera. The latter creates a nice light above your subject’s face, and is the position Joel demonstrates in the video.

In the second setup, Joel goes back to a setup that’s very common to his work. He keeps the beauty dish where it is, but adds a pair of rim lights to really separate his subject from the background. The subject also switches out to a different outfit.

Even with the extra lights, the main light on our subject is still just the single beauty dish. The two lights at the side simply help to separate the subject from the background. In the single light shot above, this isn’t really needed as the hat being worn is already light enough to pop out.

Another option, if your subject is wearing dark clothing or has dark hair, is to simply go with a light coloured background. This allows you to easily see the outline definition of the subject, without having to add extra lights.

There was something else Joel says in the video, too, which is quite interesting. It was also mentioned in another video we posted yesterday. Subtle changes, even just a third of a stop more or less light on our subject, can have a drastic effect on the mood and feel of the final result.

So, when you get your one light, modifier or not, experiment, try different things. Go with positions you know will work, and then just adjust one parameter at a time. Knock the power up or down slightly. Move the light up & down or left & right. Take the light further away or move it closer. All of these things will produce a different effect. But make sure to only change one at a time, so you know which change is doing what.

« This is why you absolutely need a polarising filter
RED officially announces their first smartphone, with hologram and 3D VR and AR »