Many timelapses these days use motorised dollys to add an additional dimension of movement in the footage. They are one of the best ways to create dynamic sequences, adding movement to an otherwise plain timelapse.

The market has exploded over the past few years, and there are now a wealth of commercially available dollies. They price in from around £900, to well over £6000. However, dollies are quite simple by design, and pretty easy to build yourself. 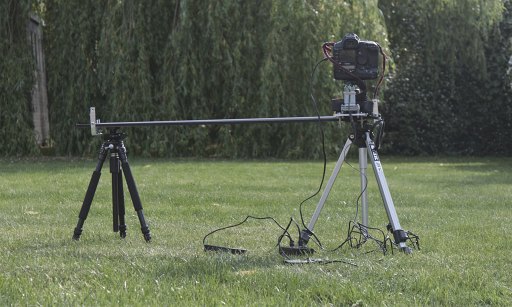 The issue I always had was that I’m a mechanical guy. Give me a hammer and some straws, and I’ll build you a bridge. But if you gave me a lightbulb, some wire, and a battery, I would probably end up with a pile of broken glass on the floor and an electric shock.

I was however able to build a functioning dolly, with minimal gear. It will do shoot-move-shoot and continuous movement, and you can fully adjust the speed and timings used. And you want to know the best part? The entire thing (including ALL parts), only cost me about £150. This included blagging the rail for free from a company.

I’m going to walk you through the circuit step by step, so you can understand exactly what is going on.

If we created a circuit with a motor and a battery, the motor would be constantly moving.

If we now add a switch in there, and turn it to open, the motor would stop moving. 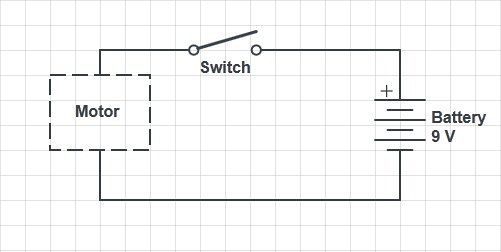 But if we swapped that switch out for an intervelometer, the motor would still not move. Intervelometers are just electronic switches. When they tell your camera to fire, all they do is create a closed circuit.

So when the intervelometer is turned to ‘on’, the motor would start to move. We can now control the motor in two ways:

1) Press the ‘shoot’ button on the intervelometer to turn the motor on. This allows us to run the motor continuously.

However, due to the way in which it is wired, it turns off as soon as the motor turns off, the timer also turns off (and tells the camera to take a photo). The solution to this is to set a 2 second timer on the camera. Of course this is not ideal, however it is a workaround to using a simple circuit. 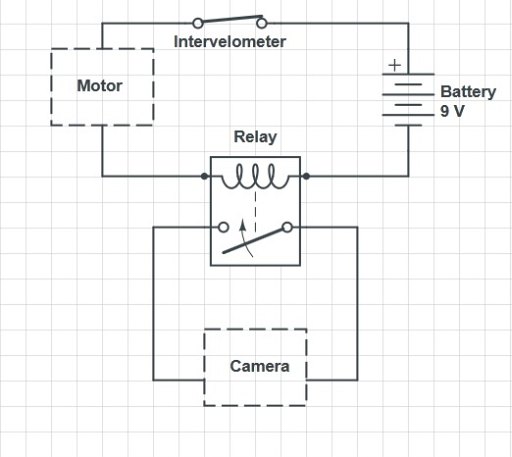 We can also add a PWM controller in there to adjust the speed of the motor. This allows us to fine-tune how quickly the motor moves, and have a lot more control over our timelapse. 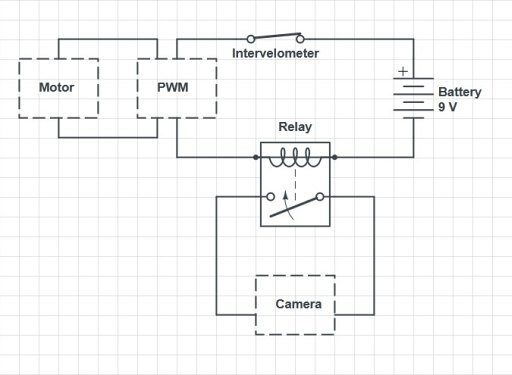 Here is the finished circuit diagram. I’ve also included all the connectors so you can see what goes where. I used a mixture of 2.5mm and 2.1mm DC jacks. Why? Because now it’s impossible to connect up the circuit incorrectly. The battery will only connect in one location. 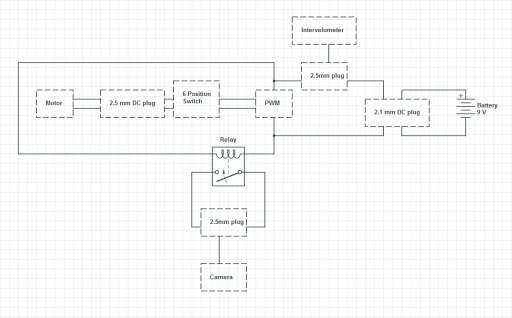 I have added the 6 position switch in there, just after the PWM. By clicking the switch the current will swap to the motor, and it’s direction reverses. To see how to wire the switch up, follow this link. 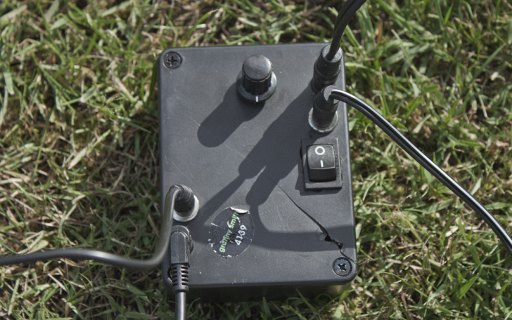 Above is the finished controller, out in the field. I put the inputs on the bottom left side, and the outputs on the top right. This prevents any confusion when out shooting. I accidentally cracked the case when drilling the holes (note: always start with a small drill bit in thin plastic).

I actually had inspiration for this build from a video on youtube. The guy does an excellent job of explaining how everything works, so I recommend checking it out. I tweaked the build slightly by adding a relay, and I’ve also used much more powerful parts.

Phew, hopefully that all makes sense. If you have any questions or comments, please let me know below! The next section is about the mechanics behind the slider, and also include details on the motor used.

I based my dolly around a rail from the company Igus (we reviewd it here). These are designed for industrial applications and are built to last. In fact many companies purchase these rails, brand them with their own logo, and then re-sell them as camera dollies for a large profit. Cut out the middleman and go direct to the supplier!

You might be wondering how I managed to purchase a rail and all the electronics, for under £150. Well, I didn’t. Truth be told I actually managed to convince Igus to send me a sample of the rail for free. At that time I was looking to create a modular motorised timelapse dolly and introduce it the market. I explained this to Igus, and they were happy to supply me with a free sample.

It’s unlikely that they will send you one at no cost for a personal project, but it’s worth a shot anyway! If you can figure out a way that it will benefit them too, they might help you out.

The first step is to flip the carriage around by 90° to the rail. You can easily turn two of the bearings around, but the other two will need new holes. 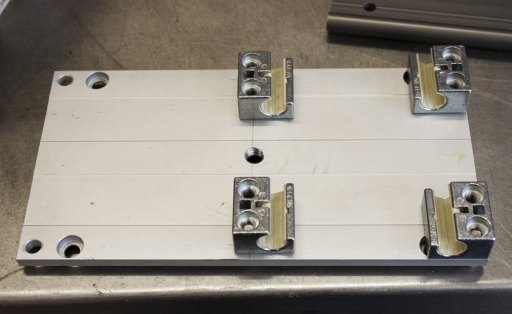 You can see the original holes on the left hand side. The new holes are in the center of the carriage.

The next step is to drill the holes for the motor, so that it can be mounted to the carriage. I used the dimensions given on the datasheet for the motor, then drew them on in pencil. 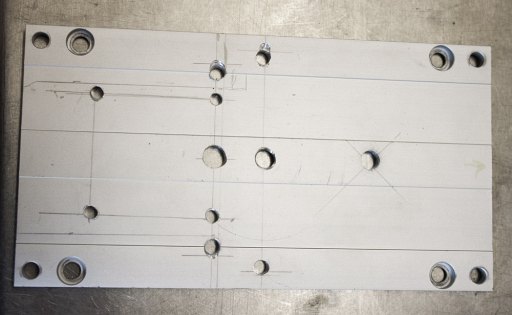 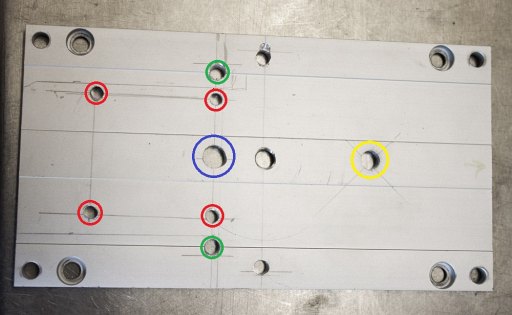 As the design uses a belt in an omni-drive configuration, idlers are needed to hold the belt tightly over the motor.

The yellow hole was drilled at 5/16″, and then tapped to 3/8″. This allows for a bolt to be turned through, and a ballhead can be attached. 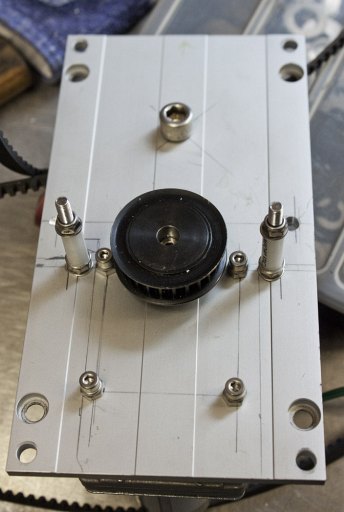 The idlers were made up of two long bolts and an old pen. The pen was cut into two equally sized pieces and placed over the bolts. This allows the belt to run freely over the pulley, without gripping on the bolts. 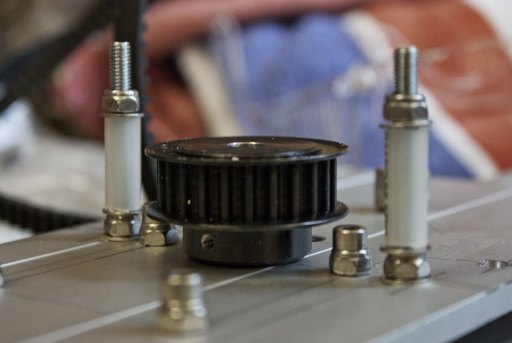 As you can see the configuration was bolt, nut, spacer, pen, spacer, nut. Make sure the top nut is not tightened too much, or the pen won’t turn on the bolt. 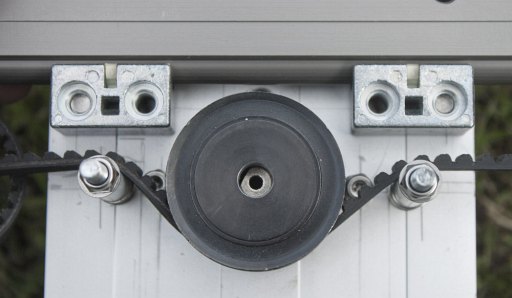 Next I needed a way to attach the belt to the end of the rail. I used two right angled brackets, bolted onto either end. 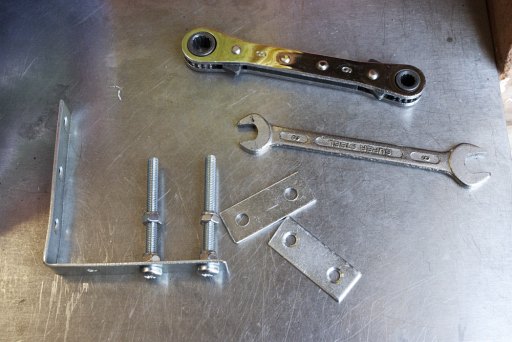 You will see that I’ve used another nut halfway up the bolt. This was so I could lower the bracket down slightly, and get it in line with the belt. The two plates on the right hand side are used to bolt the belt onto the bracket. These were just cut from spare right angled brackets. After testing I realised that 1 bracket was not strong enough. So I tripled up and used 3 brackets. 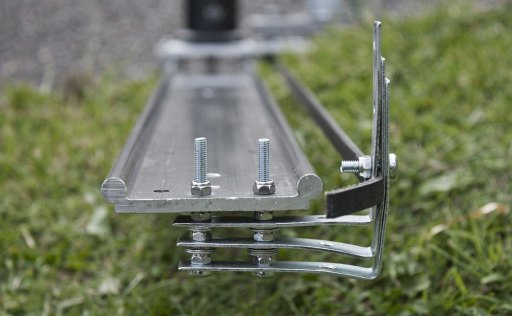 The rail was also drilled in three places. The middle, and near each end. Again I used a 5/16″ drill bit, and tapped it to 3/8″. This allows me to easily attach tripods to the rail. 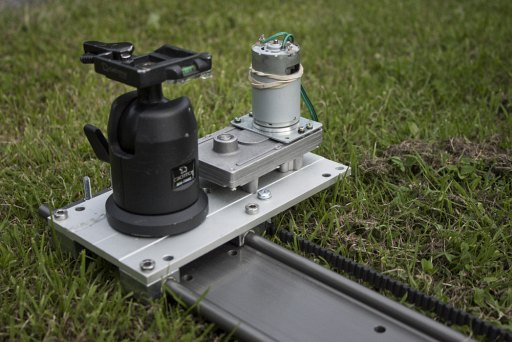 And voila, one finished timelapse dolly!

Paul Richardson is a Timelapse master. His site is bulging with useful timelapse info, well worth dropping by and saying hi.

The Bigshot Camera Is A Full Fledged DIY Digital Camera