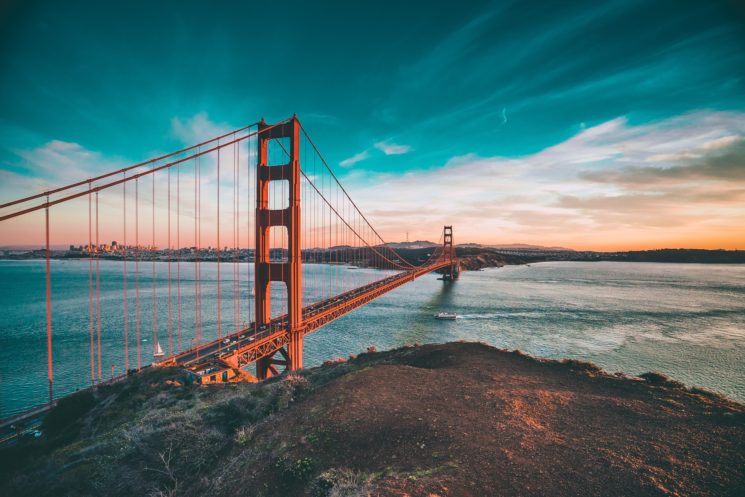 Bay Area photographer Bruce Getty is facing legal action over a photo of the Golden Gate Bridge. According to the Bridge District, Getty took a photo of the bridge from an “illegal angle.” This led to him getting a cease and desist order and he’s threatened with prosecution if he shoots near the same area again.

If you visit Getty’s Instagram page, you’ll see plenty of photos of the Golden Gate bridge. Speaking to abc7 News, the photographer said that he’s “just a guy who likes to go on the rocks, and get a unique angle of the bridge.” He added that he’s “not the only one who does it.” Still, it wasn’t enough to save him from legal trouble over one of his images. It was taken from below the iconic bridge, with a 2018 Blood Moon photo composited into it.

According to the same source, Getty was accused of trespassing into the restricted area underneath the span to get his shot. Because of this, he received a cease and desist order from the law firm representing the Bridge District. They are also reportedly asking for any profits Getty has made on the image.

The Bridge District spokesman, Paolo Cosulich-Schwartz, said that they “enforce the law when it comes to sharing pictures of restricted areas at the bridge.” Still, Getty claims that he didn’t sell a single copy of this image, and he refuses to take it off his website.

Now, the thing is that there are security fences and a clear “no trespassing” sign in the area. Getty even explained how he got around the fences when the tide was low. He added that he got the ticket for trespassing at the same place back in 2014. Then last December, he says that he was stopped by the police for the same reason, in the same area. The police officer reportedly told him that he wouldn’t give him a ticket, but asked him to delete his photos. Getty claims that he refused.

Now, I’m not a lawyer. Just like Getty, I’m also “just a nobody taking pictures.” And while I’m usually on photographers’ side, it seems to me that he’s in the wrong here. There is a fence. There is a sign that forbids trespassing. Just because the tide is low, that doesn’t mean you can and should bypass the fences and take photos in restricted areas. That’s just my opinion, but I’d love to hear what you think about this case. Who’s in the right here?

We have heard from the photographer Bruce Getty who has shared more info and his side of the story with us. He believes that the Bridge District is simply cracking down on photographers who have taken photos from this angle so they can “hunt for money.” Something like this has also been discussed here.

As I mentioned, Getty sees himself as “just a nobody taking photos.” However, he’s pretty darn skillful in my opinion, and photography has been more than a hobby for him. It has been, quite literally, a lifesaver. Getty was struggling with cocaine and alcohol addiction for years before he was admitted to Atascadero State Hospital in 2008, where he spent three years.

In 2011, Getty used an insurance check to buy a Nikon D600 and a computer from FireSide Camera. Photography has helped him to stay on the right track, and the Golden Gate Bridge has been one of his favorites hooting subjects. Hee keeps trying to find new and unique angles, which is what got him into trouble with the Bridge District and the police.

Getty tells DIYP that the area he was standing is not supposed to be off-limits. He was there on Christmas day with his fellow photographer friends, and there’s a “gray area” that shouldn’t be restricted.

“I’ve always accessed that place during low tide and the coastline is not supposed to be off-limits unless it’s specified by the military.” He says that there is an elevated road that is off-limits, but the same restrictions aren’t applicable to the coastline. “I’ve been there many times. It’s not a sensitive area and it’s not any more dangerous than any other area around the Golden Gate.”

The photo, as I mentioned, is a composite, which could potentially complicate the case even further. Getty photographed the bridge in 2014, while he captured the photo of the moon “in either 2018 or 2016,” as he says. However, in their cease and desist order, the Bridge District cites 2016 as the year of the alleged trespass, based on the moon photo. The thing is: the moon wasn’t photographed from the same “illegal angle,” and maybe not even in 2016.

Here are screenshots Getty sent us, showing the places where he was standing while taking the photos in question:

Location of the bridge photo

Location of the moon photo

« Ever wondered how Instagrammers get those amazing shots? Turns out they’ll go great lengths to get them
Nikon released new firmware for the Z6/Z7 cameras to add Animal Eye-AF (Z50 gets fixes) »