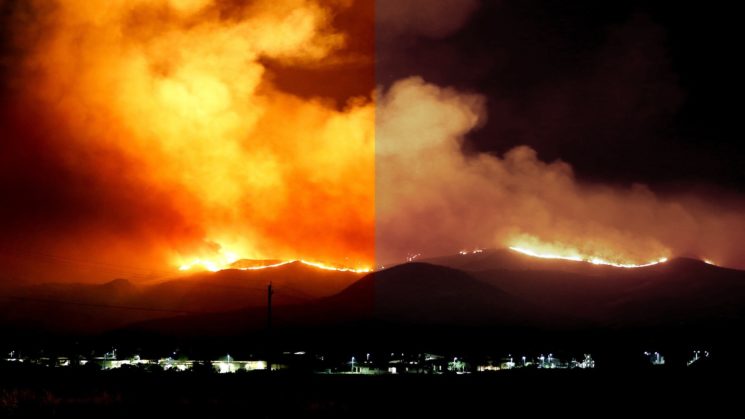 Massive wildfires are currently raging in the US West Coast. The skies have been colored orange and red, but you might not be able to accurately capture it with your phone camera. Many people have noticed that auto white balance on phone cameras is severely affecting orange and red hues. This makes this whole tragedy look way less dramatic and alarming than it is.

Some Twitter users shared photos and videos from Oregon and California that show what the skies really look like. I think that we can all agree how scary and devastating this is.

However, there are many people who noticed that something was off when they tried capturing the scene with their phone camera. Twitter user @teriarchibbles shared a few photos and wrote:  “Fun fact. Had to take that picture with my Canon camera because my phone keeps auto color correcting it and doesn’t show just how gross outside it actually is.” The photo taken with her camera shows what it really looks like outside. In the photos taken with her phone, it looks like there’s a heavy storm or smog outside.

Fun fact. Had to take that picture with my Canon camera because my phone keeps auto color correcting it and doesn’t show just how gross outside it actually is. pic.twitter.com/68uhYkwTW4

Enjoy some horror aesthetics from my work from home space today. pic.twitter.com/nVZTb8cqd2

Other Twitter users started responding with their own examples. I find this one the most striking because it truly shows the difference between color-corrected images and reality:

I took a photo with my bfs phone of my phone, to show how badly mine color corrects it too pic.twitter.com/0KLqDWHlYN

Judging from some tweets I read, it looks like iPhone users have the biggest problem with color correction. When they wanted to snap accurate photos, they had to either use a “real camera,” or a third-party camera app like Halide that would disable iPhone’s auto white-balance. Here are a few more examples:

Yep – had to download a separate camera app that allowed me to override the phone’s auto white balance. pic.twitter.com/EO9TyC0VCp

Ok, used an app to turn off the iPhone color correction. Here’s what it really looks like out there in San Francisco, at 10 in the morning. (It’s getting darker) pic.twitter.com/v8TKcBH1t3

Like Gizmodo’s Victoria Song notes, getting a good photo of the current apocalypse may end up being the least of our worries. However, you may need to get accurate photos if you work as a journalist, for example. Or you just want to document this devastating moment in history. Whatever the reason may be, I guess that it would be clever to use a third-party camera app if you want to really depict what it looks like out there at the moment.

See What ‘Grand Theft Auto’ Would Look Like in Real Life